A lovely day and a nice 4 tables of bridge. Congratulations to Joe and Wynne for a nice 61.11% for the top. You've all done very well. Our new pair, Kathy and Alan, started off well with a top-half finish. Good for them.

For those attending the open game on Thursday, don't forget that the advanced class is on hiatus for the Summer. The game will start promptly at Noon. Be in your seats by 11:55 so that I can count the tables and set up the game.

I hope to see you next week.

PS: One of the disadvantages of my playing is that I'm not able to keep my eye on the scoring. There were at least 4 instances of mistaken scoring (Boards 5, 16,17,18) that greatly changed the ranking. I must point out, however, that North is responsible for preparing the scores and the opponents are responsible for verifying them. We can all share the blame. We can add that to the list of things we learned today. 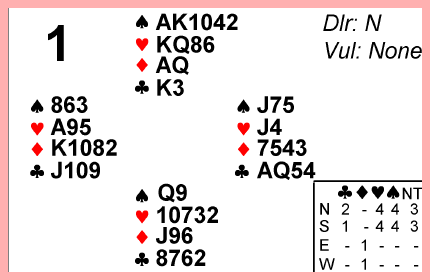 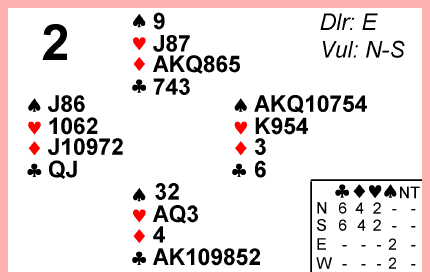 East's hand is too good for a preempt, so he opens 1 Spade. South overcalls 2 Clubs, West passes and North advances 2 Diamonds. East sees the opponents with a big double fit and jumps to 4 Spades to try to shut them out. It works and he is only down 1 for a top score.
The tables where East let North/South communicate would do poorly by letting them play and had to sacrifice at 5 Spades doubled and down two. If you think you're going to have to sacrifice, the sooner the better. 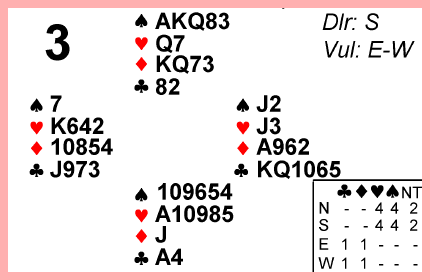 South and West pass and North opens 1 Spade with his 5-card suit and 17 points. East passes and South reevaluates to around 13 points in support of Spades. He's pretty sure of game but there could be slam. He wants more information and doesn't want to bid anything that partner could pass. He bids 2 Hearts to show 10 or more points and force partner to describe his hand. North must bid 3 Diamonds to show his 15-18 points and South stops to think. Since partner couldn't jump-shift to show 19 points, he forgets slam and just jumps to 4 Spades. It makes 10 tricks for what should be a good score, but some defenders don't get their 3 tricks: the King of Hearts, Ace of Diamonds and Queen of Clubs. 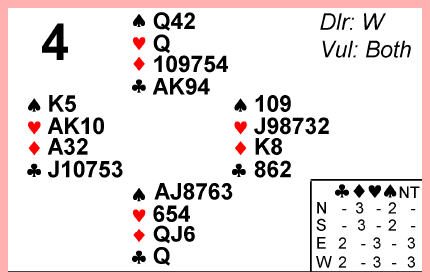 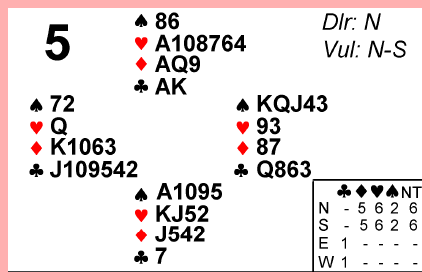 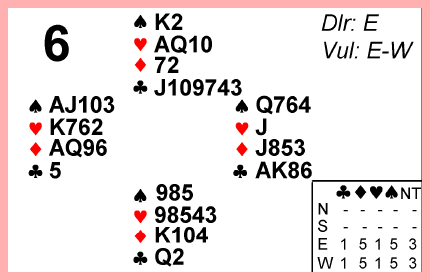 East and South pass and West opens 1 Diamond. North passes and West must respond up the line with 1 Spade (to raise partner's Diamond would deny a 4-card major he could bid a the one level). West stops to reevaluate and think. With the major fit he now counts 17 points and jumps to 3 Spades. East raises to game with his 12 points. It makes for a good score. 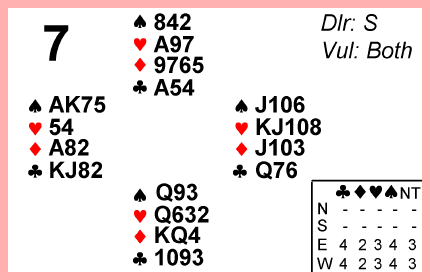 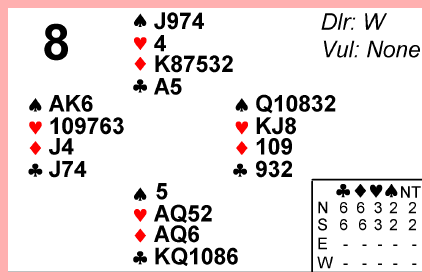 This is a tough hand to get right. West, North and East must pass and South must open 1 Club. North must respond 1 Diamond and South must jump to 2 Hearts to show his two suits, 19 points and to force to game. Now there are options and it gets tricky.
North considers 2 Spades, 2 No Trump or 3 Diamonds. He's reluctant to bid a new suit at the 2 level since even forced that might suggest extra strength. No Trump is almost irresistible, but he has no idea what partner has outside his two suits. He needn't be in a hurry, so decides to treat it as he would to show preference. He doesn't like either of partner's suits so rebids his 6-card suit to describe his hand.
Now East must stop and think. He can't even consider No Trump and can't rebid either of his suits, so just jumps to 5 Diamonds with his good support. It makes for an overtrick for a good score.
Alan got a lucky top with 3 No Trump making 13 tricks. If West avoids leading into declarer's suits and chooses the Ace-King-6 through dummy's Spades, the defenders will get the first 5 tricks.
Bridge can be a cruel game. That's why we love it! 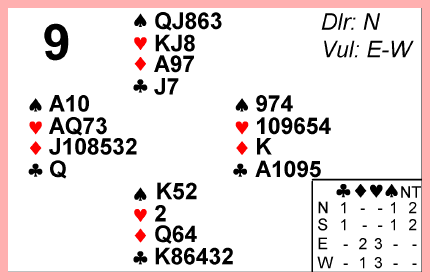 Ugh! Is there any way out of this? North will pass in first seat, East and South will pass and West opens 1 Diamond. North will now overcall 1 Spade, East must pass and South doesn't have enough to invite game (Lesson 4), so must pass. West has a minimum opening and a poor suit, so should pass. North will make 1 Spade for a good score. 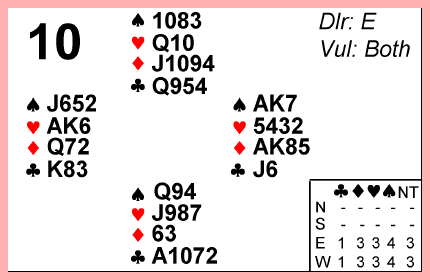 East counts 15 HCPs, but doesn't like the two poor suits. He judges that 1 Diamond is safer. East considers a jump to 2 No Trump, but since that would deny a 4-card major he responds 1 Spade. East lacks the the 17 points to reverse to 2 Hearts, so must rebid 1 No Trump promising nothing but 13-16 points. West must now raise to 3 No Trump. It should make 3 Spades, 2 Hearts, 3 Diamonds and 1 Spade for a good score. 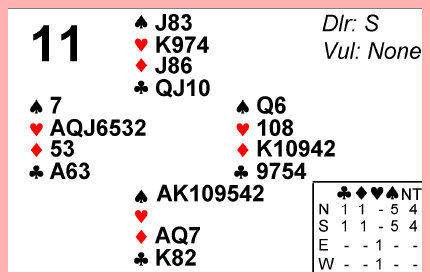 Good job! Everyone got to the best contract. Two pairs got an extra overtrick for the top. Good play or bad defense? West has the opening lead and the plan to take the Ace of Hearts and lead another for partner to ruff is appealing. It's just as likely to set up a trick for declarer though, so should wait. In this case there was a double whammy when declarer ruffed the Ace and later cashed the King to throw away a Diamond loser. If West leads anything else, declarer gets one overtrick to share the top and bottom four ways. 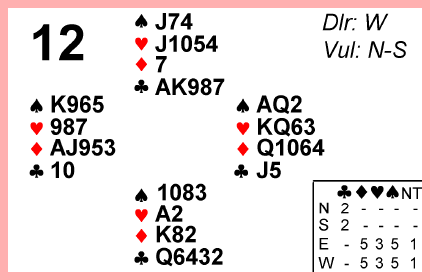 West and North must pass and East opens 1 Diamond with his 14 points. West must show his 4-card major before raising opener's Diamonds so responds 1 Spade. North must pass again and East lacks the 17 points required to reverse to 2 Hearts. He must rebid 1 No Trump promising only 13-16 points. South passes again and now West jumps to 3 Diamonds to show his 5-card support and 10 or more points. East stops to reevaluate and think. He now sees 15 points and ponders inviting game. Partner might have 13 or so points, so he invites with 4 diamonds. West has just the 10 points already promised, so must pass. Declarer makes it with an overtrick for a good score.
One North/South pair muscled into Clubs and got swept up to the 5 level. They were rewarded with a bottom for their effort. Sleazy overcalls result in more disasters than everything else combined. I can't wait until lesson 4. 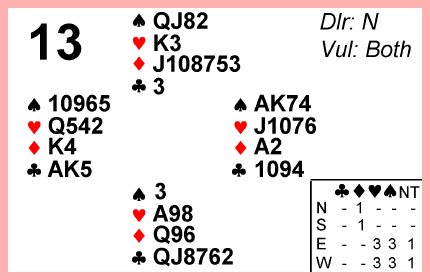 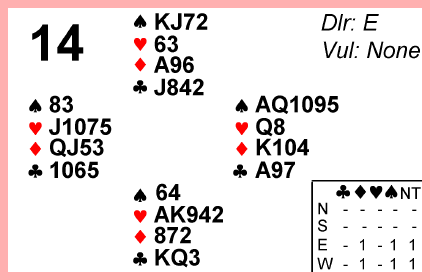 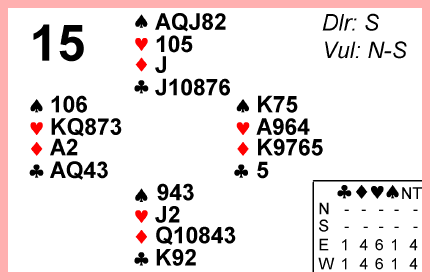 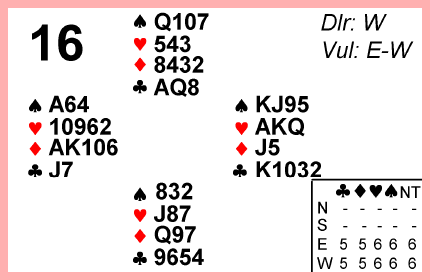 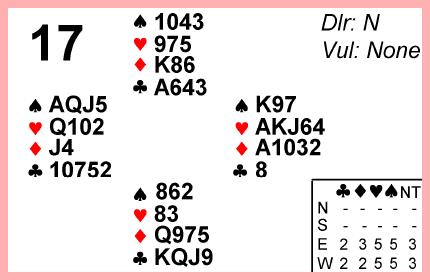 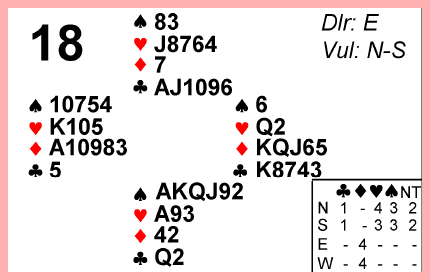