Duplicate bridge is played using hands placed in a board (a plastic holder), so that the same cards are played at each table. You play each board against the other pair at your table, but actually you are competing against the pairs at the other tables who play the same hands as you.

The players’ responsibility in this process is to ensure that the contract and the result are properly recorded. The recording is North’s duty, but he must ensure that the other players concur with the entry into the Bridgemate. When play is ready to begin, the director will place the movement information into the scoring program and direct the North players to activate their Bridgemates. North selects OK and enters the player IDs. When the information for the first round appears on the screen, he will check it against the guide card and then enter the number of the board to be played. 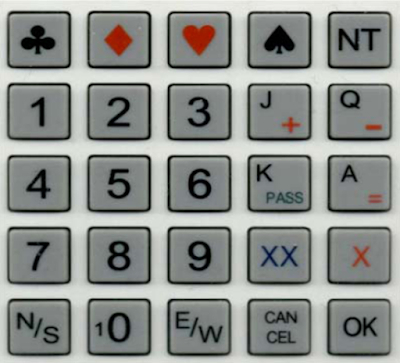 The Bridgemate sends the data to EBUScore, the scoring program used in our computer. EBUScorer calculates the scores, the MPs, and the tentative standing and displays them on the monitor. When all the boards have been played, EBUscorer sorts the results by board number and displays them in the format for Excel. The director posts these scores into nhbridge.club, our website. The recap for board 1 is shown below.

The MPs are determined for each pair by comparing their score to those attained by the other pairs who played the same hands. One MP is awarded for every pair they beat and ½ MP is awarded for every pair they tie. The Top is the number of other tables playing the same board and represents the maximum number of match points which can be attained for a given board. In the example above, the board is played at 5 tables, so the top is 4. The sum of the MPs for N/S and E/W at each table will be 4, the top.

The boards played are also posted with the recaps, including a computer analysis of those contracts which can be made by each side. The director will usually add comments to the boards on Tuesdays which may contain interesting points. This is all part of the lesson for which you paid, so you should always check the results at nhbridge.club.