Congratulations to Claire and Roberta for a fantastic 93.75% for today's top. You've all done very well today considering the catch-as-catch-can game today. We went from four tables to two in a hurry. I hope we get stabilized next week.

Next week we will continue with the worksheet. Be prepared to discuss the hands.

I'll try to add some comments to the boards. Check back tomorrow to see if I have anything helpful to offer. 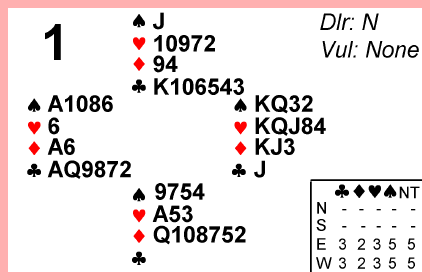 North passes and East opens 1 Heart. with her 15 HCPs and 5card major. South passes and West responds 2 Clubs with her 14 HCPs, 6-card suit and 3 distribution points. North passes again and East reverses to 2 Spades with her 15 point, forcing the partnership to at least 3 Hearts. West raises to 4 Spades. It makes for a good score. 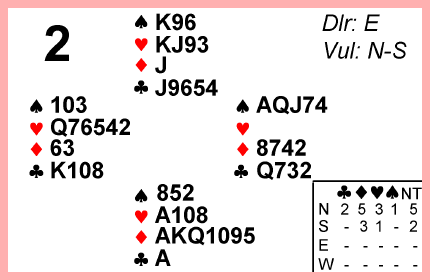 East passes and South opens 1 Diamond with her 6-card suit, 17 HCPs plus 2 for the singleton. West passes and North must respond up the line to 1 Heart. South rebids 3 Diamonds to show her 17 or more points and 6  or more Diamonds. North sees enough for game and rebids 3 No Trump. It makes for a good score. 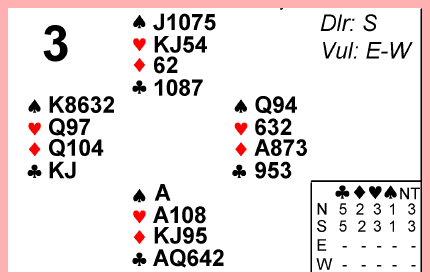 South counts 18 HCPs plus 2 for the Spade singleton and opens 1 Club, intending to reverse to 2 Diamonds on his rebid. North responds up the line to 1 Heart with his 6 points and South reverses to 2 Diamonds as planned. This forces the partnership to at least 3 Clubs, so North bids 3 No Trump. It makes for a good score. 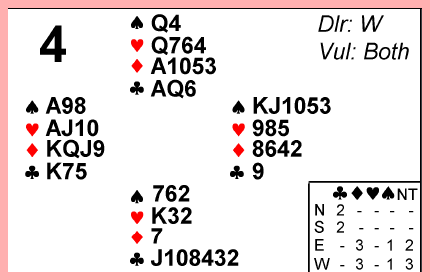 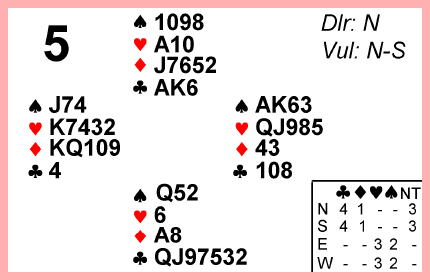 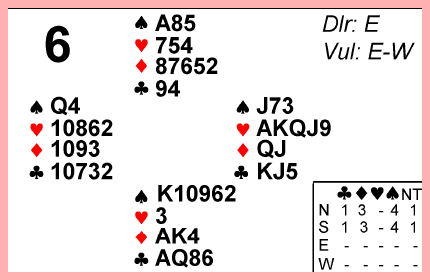 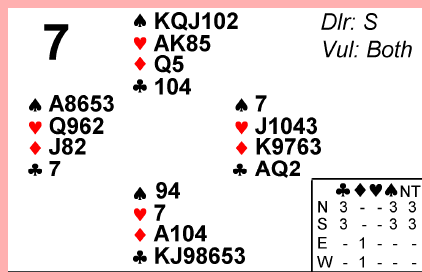 It floats to North who opens 1 Spade with her 15 HCPs plus 1 for the Club doubleton. East passes and South responds 2 Clubs with her 8 HCPs plus 2 for the singleton and a 7-card suit. North rebids 2 hearts to show her second suit and South rebids 3 Clubs to show her 6 or more card suit. North stops to reevaluate and think. He knows that his Club support makes partner stronger and should have 13 or more points in Clubs. He considers 5 Clubs, but eleven tricks are never easy and he sees a lot of losers. He considers 3 No Trump but is leery of the Diamonds. Should he pass or make a stab at game?
If he passes or bids 3 No Trump, he can make it for a decent score. If he bids 5 Clubs, he'll go down. Tough call! 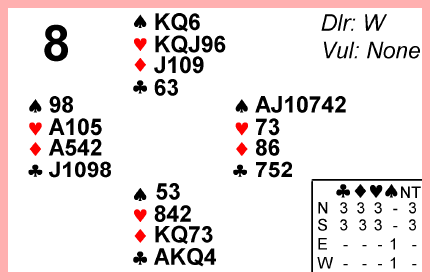 The only game against best defense is 3 No Trump. Can you bid it?
North counts 12 HCPs plus 1 for the Club doubleton and opens 1 Heart. East may bid 2 Spades, a weak-jump overcall. South counts 14 HCPs plus 1 for the Spade doubleton and responds 3 Clubs, forcing partner to describe his hand. West passes and North can only rebid 3 No Trump. South must now decide to pass or correct to 4 Hearts. If he does the former it makes for a good score. If he does the latter, he may go down. If he makes it, it's a top. Again, tough call, but you really can't stop short of game. 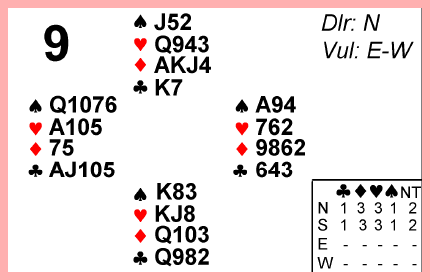 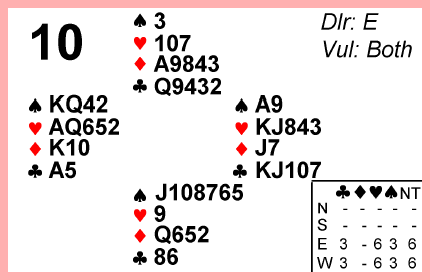 East counts 13 HCPs plus 1 for the Spade doubleton and opens 1 Heart. South passes and North stops to reevaluate and think. She counts 18 HCPs plus 1 each for the doubletons and 2 for the 5-card support. She knows they have game and is interested in slam so she can't bid anything that partner could pass. She responds 1 Spade, forcing partner to describe her hand. East must now subtract the point for the doubleton and rebids 2 Clubs to show her two suits and 13-18 points (She didn't jump-shift, so can't have 19).
West must subtract the point for the Club doubleton, but still has scads of points and is interested in slam even if partner has a minimum. She jumps to 4 No Trump, Blackwood, to check the Aces. When partner bids 5 Diamonds to show one Ace, West raises to 6 Hearts. South leads and dummy puts down her hand. Declarer must stop, count her tricks and make a plan.
Declarer sees 10 sure tricks; 3 Spades, 5 Hearts and 2 Clubs and hopes to throw a diamond on the third Spade and ruff two Clubs. She mustn't lose two Diamonds. If South leads anything else it's easy, but if South leads a low Diamond, declarer must think hard. If she plays the King from dummy, North will take the Ace and return another Diamond to South's Queen and declarer is set before she starts. If she plays the 10 instead it forces North's Ace and sets up her King. How is she to know?
It is standard practice not to lead away from an Ace against a suit contract, especially a slam. She doesn't want to risk defender winning that trick and later trumping her Ace. If North, then, has the Ace, you can see the King, Jack and 10, and South led away from an honor, she surely has the Queen and declarer must play the 10. If South is wily enough to false-card from her Ace, she deserves to win. 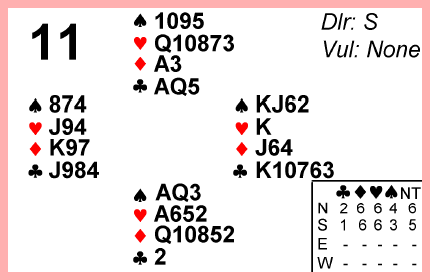 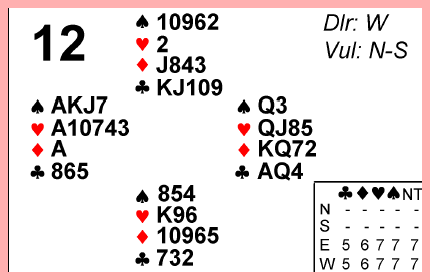 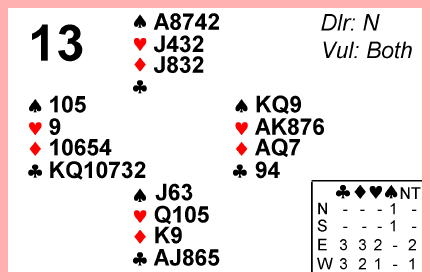 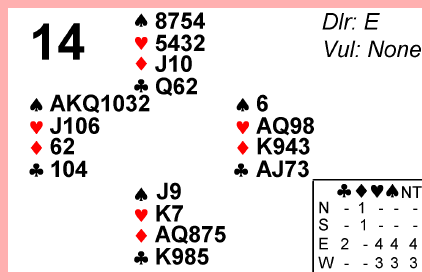 No one got to game here. How should it go?
East opens 1 diamond with her 14 HCPs plus 2 for the singleton. South passes and West responds 1 Spade to force partner to describe her hand. East reevaluates and takes away the 2 points for the singleton in partner's suit. She must rebid 2 Clubs to show her two suits and 13-18 points. West jumps to  3 Spades to show her 6 or more Spades and 10-12 points. East is on the edge with a total of 24 or more points, but decides that partner's Spades are surely worth an extra point or two, so bids 3 No Trump.
West considers correcting to 4 Spades, but trusts her partner and passes. Either contract makes for a good score. 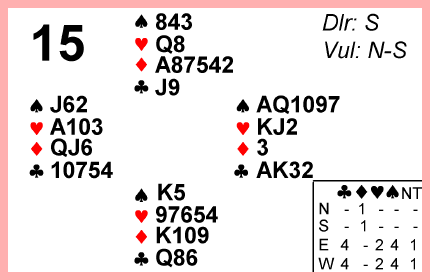 Again, neither bid the game, but both made it. How should it go?
It floats to East who opens 1 Spade with her 5-card suit, 17 HCPs plus 2 for the singleton. West raises to 2 Spades with her 3-card support and 8 points. East jumps to 4 Spades with his 20 points opposite partner's 6 or more. It makes for the top. 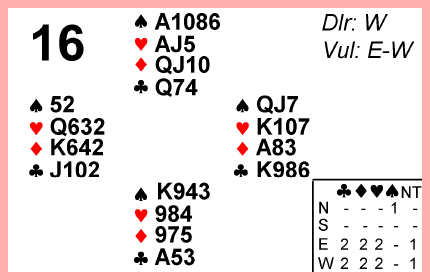 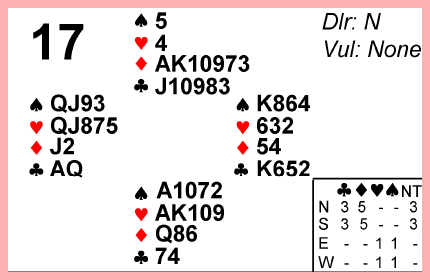 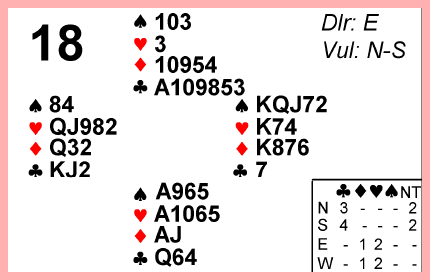