A rainy day that turned out nice was great for bridge. Congratulations to Jane and Jan for a super 66.7% for the top. You've all done very well.

Nancy has taken French Leave, so you'll be stuck with me for several weeks. Go easy on me.

Check back here tomorrow to see what comments I've added to today's boards.

See you next time, Dave 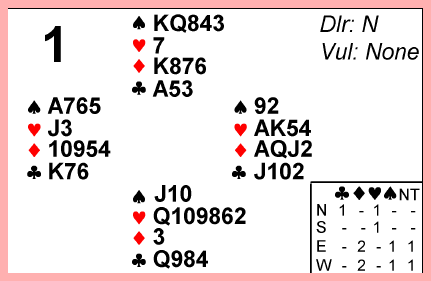 We have a lot of part scores today, but since a top with 2 Diamonds or 2 hearts scores the same as slam, we'll try to figure out the best approach on them. On this board, North will open 1 Spade and East will stop to think. He can't overcall, but can double for takeout if he can convince himself that he is willing to pass if partner advances 2 Clubs. Let's suppose he is, so doubles. This actually helps South. If he has 10 or more points, he'll redouble, so he can do anything else and partner will know that he has less than that. He takes advantage and responds 2 Hearts. West doesn't want to bid his Diamonds at the 3 level, so passes as does North. South may go down for  minus 50, but that's better than passing  and letting West make 2 Diamonds for a top. 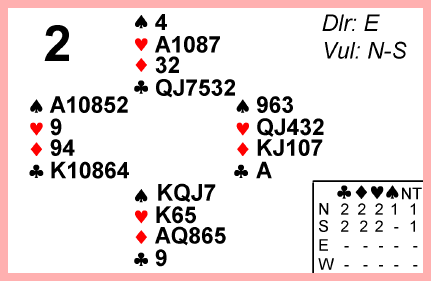 The results on this board are horrible. Can we do better?
East counts 11 HCPs and 2 for the singleton and opens 1 Heart. South counts 15 HCPs and 2 for the singleton and doubles for takeout (Big). West passes and North advances 2 Clubs. East passes and South stops to think. He can bid again with the Big Double and will probably bid 2 No Trump or pass. Either way they should have a chance for the  top. 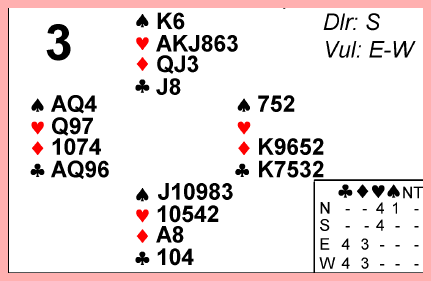 South passes and West opens 1 Club. North overcalls 1 heart promising 5 or more Hearts and 11-16 points. East responds 2 clubs and South competes to 2 Hearts. West must pass and North reevaluates to 19 points with partner's support and raises to 4 Hearts. It should make for the top, but no one made 10 tricks in hearts. Maybe if they bid it, they'd try harder. 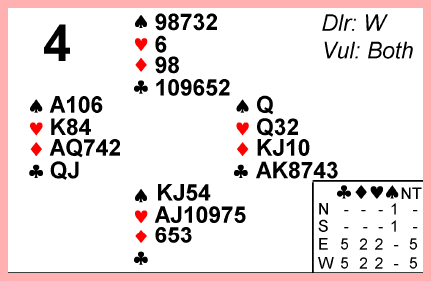 West opens 1 No Trump, North passes and East stops to reevaluate and think. When we get to Lesson 3, you'll see that, if she can raise No Trump, East will raise to 4 No Trump to show 15-16 HCPs and invite slam. West will go to slam with 17 HCPs, pass with 15 HCPs and decide with 16 HCPs. West has 16, but, with the Queen-Jack of Clubs maybe wasted, will surely pass. That should make for the top.
Jane asked me for help after Jan opened 1 No Trump and I was uncomfortable with the singleton Spade. I suggested 5 Clubs instead and she went down. Even if she made it, it would lose to 3 No Trump with overtricks. I should have stuck with my mantra of "When in doubt bid No Trump". Sorry, Jane! 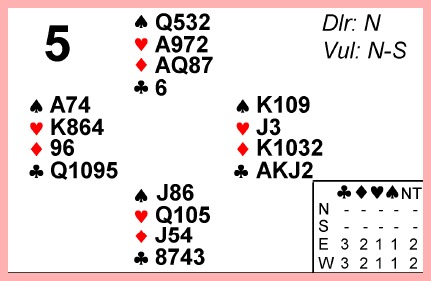 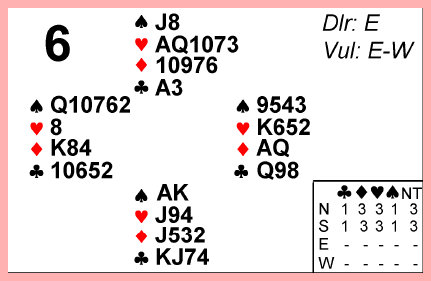 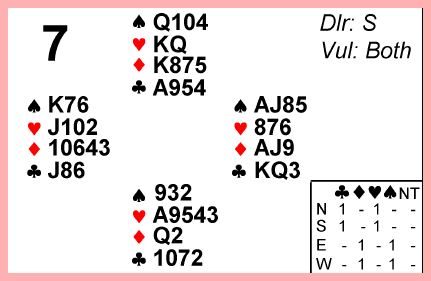 It floats to North who opens 1 Diamond. East overcalls 1 No Trump and all pass. Emily made it for a good score. I'm not sure how Joan got to 2 Spades and even less sure how she made it, but she did for the top. 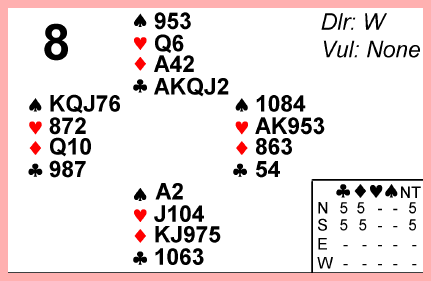 This is weird. The analysis says that North/South can make 11 tricks in either minor and No Trump, but no one got past the two level. Can we bid game?
West passes and North ponders 1 No Trump, but bids 1 Club with the two unstopped majors. East passes and South responds 1 Diamond to force partner to describe his hand. North rebids 1 No trump to show 13-16 points and no major he can bid at the one level.
South needs 11 HCPs to invite with 2 No Trump, so that is out. He does know that partner has at most 6 cards in the majors, so therefore at least 7 in the minors. He knows that partner hasn't 6 Clubs or he would have rebid 2 Clubs. He hasn't 4 Diamonds or he would have raised to 2 Diamonds. He must have 2-3 Diamonds and 4-5 Clubs. He's left to gamble on 3 Clubs or 3 Diamonds or pass 1 No Trump. What would you do faced with those choices? Probably the same as you did!
Suppose North instead opens 1 No Trump. South will raise to 2 No Trump to show 8-9 HCPs and North will raise to 3 No Trump. He is sure to make 9 tricks, so will forgo the risky Heart Finesse. This has the bonus of dropping the Queen of Hearts and giving him 11 tricks. 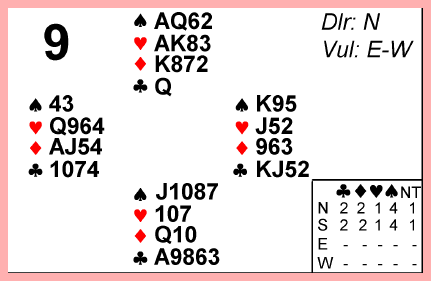 North must open 1 Diamond and South must respond 1 Spade, forcing partner to describe his hand. North will jump to 3 Spades to show the fit and 17 or more points. South reevaluates to 9 points and raises to 4 Spades. West will probably keep his honors behind declarer and lead the 10 of Clubs (Top of nothing). South will stop to count and plan.
Declarer sees 4 top tricks; The Ace of spades, the Ace-King of Hearts and the Ace of Clubs. He can try the Spade finesse and be sure of 2 more if it loses and maybe 3 if it wins. He can force the Ace of Diamonds for another and ruff at least one his Clubs in dummy and set up another Club or two. He covers with dummies Queen and when East covers with the King, wins the Ace in his hand. He then leads the Jack of Spades and runs it to East's King. East will return a Spade to reduce declarer's ruffing power and South will win with dummy's Queen. He then leads a low Spade to the 10 to clear the trumps, leaving him one in each hand.
Declarer now leads the 9 of Clubs to East's Jack, wins any return, forces West's Ace of Diamonds and takes the rest for his contract. 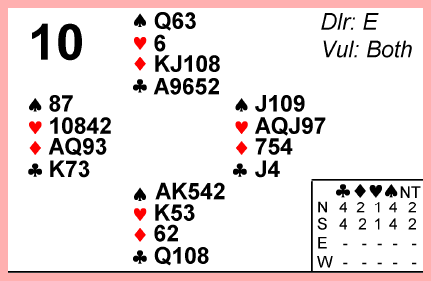 East must pass and South opens 1 Spade with his 5-card major and 13 points. North sees the Spade fit and 12 points, but can't jump to 3 spades with his 3-card support. He instead responds 2 Clubs to force partner to describe his hand, planning to further describe his hand in the next round.
This gives South an awkward rebid, forcing him to either rebid 2 Spades with only a 5-card suit, bid 2 No trump with his poor diamonds or raise to 3 Clubs. Fortunately, North will raise any of those to 4 Spades, since South couldn't jump.
Unfortunately, no pairs made 10 tricks in Spades, but if they bid it, they might try harder. 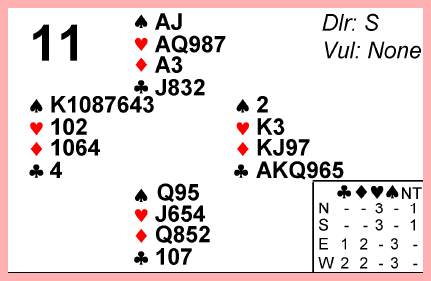 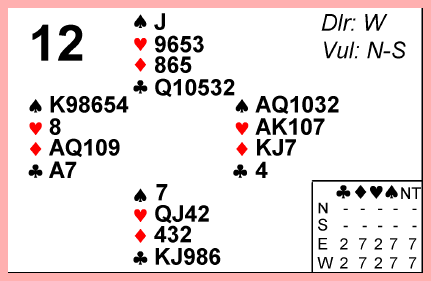 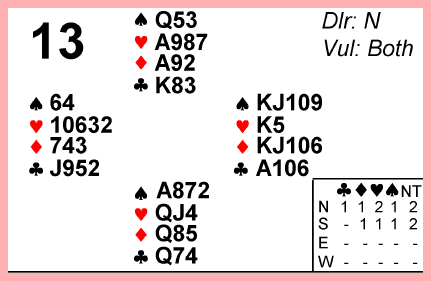 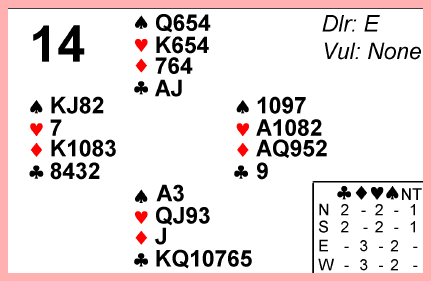 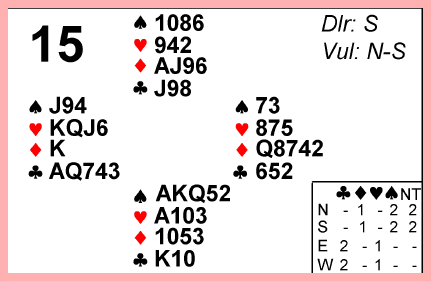 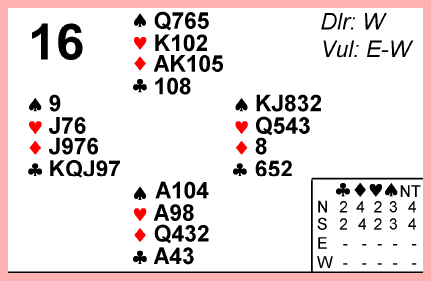 North opens 1 Diamond and South stops to think. A raise to 2 Diamonds is a gross underbid, but 3 Diamonds promises 5-card support. He instead jumps to 2 No Trump which shows 13-15 points, a balanced hand with no 4-card major suit that can be bid at the 1 level, stoppers in all unbid suits and forces to game.
North raises to 3 No Trump and Jan  made it for the top. 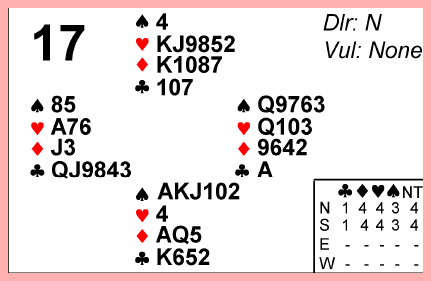 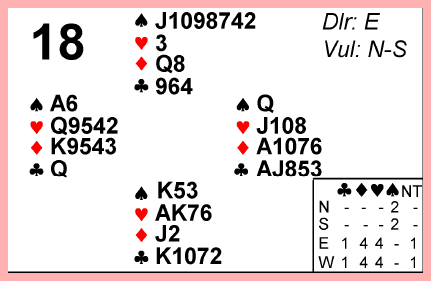