A drizzly day, but great for bridge. Congratulations to Bill and Jane for a sizzling 71.67% for today's top. You've all done very well.

Next week we'll get back to take-outs. We'll quickly review the doubler in second seat and continue with third and fourth seat. Important Stuff so try not to miss it.

See you next week. 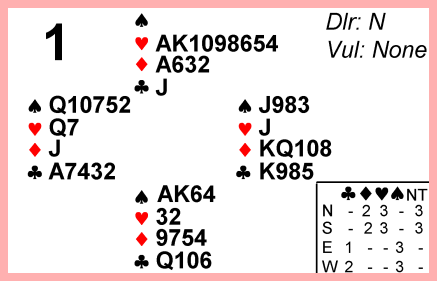 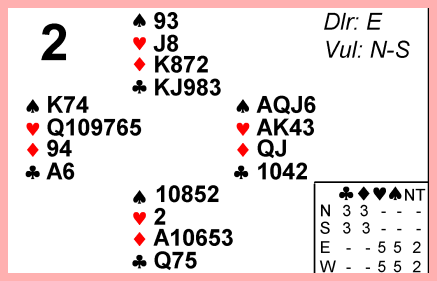 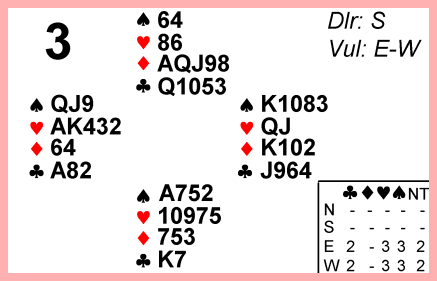 South passes and West opens 1 Heart with his 5-caard major and 14 HCPs plus 1 for the doubleton. North passes and East 1 Spade with his 4-card major and 10 HCPs. East can't rebid  2 Hearts with his 5-card suit and doesn't want to raise partner's Spades with a possible 4-3 fit, so must rebid 1 No Trump saying that he's forced to rebid and this is the best he can do.
East stops to reevaluate and think. Game doesn't seem likely, so he wants to find a safe place to stop. He can't see anything safer than 1 No trump, so passes. It makes that contract with an overtrick, but more than that is generous defense and you can't count on that. 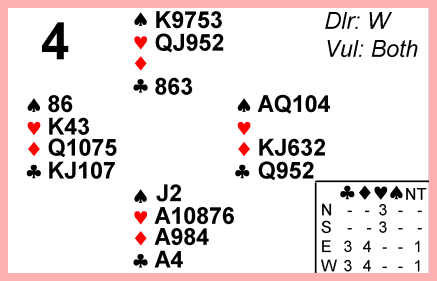 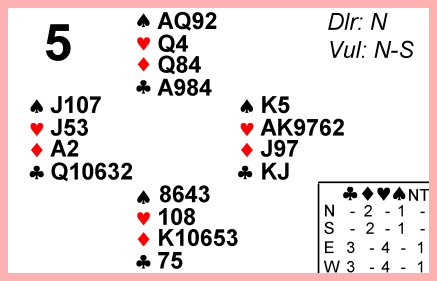 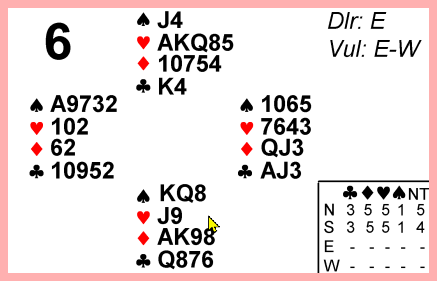 East passes and South opens 1 No Trump with a balanced hand and 15 HCPs. West passes and North bids 2 Diamonds to transfer to Hearts. South bids 2 Hearts as directed and North rebids 3 No Trumps to show exactly 5 Hearts and enough points for game. South has only 2 hearts and doesn't see any ruffs, so passes. It makes with an overtrick for the top.
It looks like neither South opened 1 No Trump. Ugh! 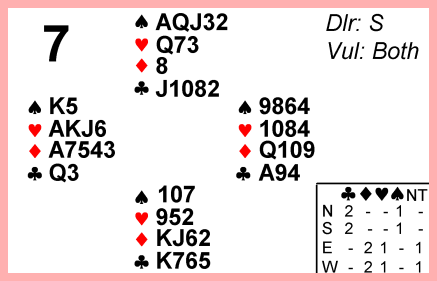 The hard part of this board is staying out of contracts that can't be made. West likes his hand with 17 HCPs, 5 Diamonds and 4 Hearts. He's surely hoping for game and will go there with the slightest encouragement. It's too bad that he can't open 1 No Trump with his 2 doubletons because partner would pass and it would be over. He can't though, so opens 1 Diamond. If North overcalls 1 Spade, East will have to pass, South will pass and West has a tough rebid. He has the 17 points to reverse to 2 Hearts, but that forces partner to the level of 3 Diamonds or higher and that's too high. Maybe that's how Joan went down.
If North passes, East will have to respond 1 Spade and that puts West back in trouble. I don't know how Debbie got to 2 Hearts, but she needed help to make that. It looks like any correct bid goes down. Any incorrect bid erodes your partnership which is your most important bridge possession. Double Ugh! 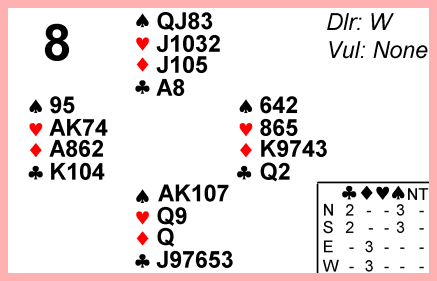 West opens 1 Diamond with his 14 HCPs plus 1 for the doubleton. North must pass and East stops to think. He has only 5 HCPs, but decides to raise to 2 Diamonds with his 5-card support. South is no where near a 2-level overcall, so passes. West stops to reevaluate and think. partner's Diamond raise denied a 4-card major, so he passes. It makes with overtricks for a top. 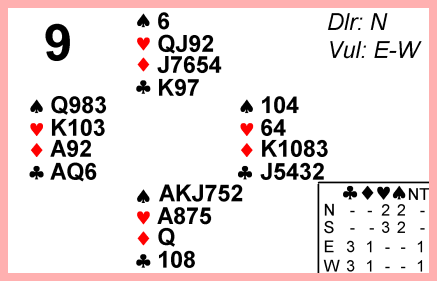 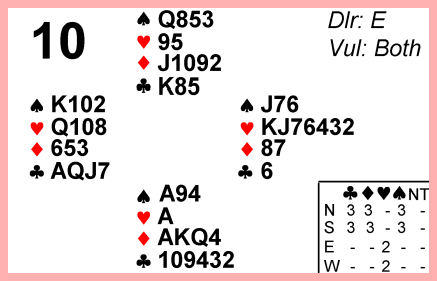 East must pass and South opens 1 Club (He has enough to reverse, so can bid his longer suit first and still rebid Diamonds if necessary). West passes and North bids up the line with 1 Diamond. East passes again and South stops to reevaluate and think. He has a Diamond fit and 17 HCPs. In Diamonds he can add 2 for the Heart singleton Ace for a total of 19. Partner has at least 6 points for his response for a grand total of 25 or more. That's not enough for 5 Diamonds unless partner has more. Can he make 3 No Trump? He has only 5 sure tricks and maybe 1 more. Partner is unlikely to have 3 tricks unless he has a lot more. He decides to invite and leave it up to partner. The singleton Heart is worrisome so he invites with a jump to 3 Diamonds.
North has a minimum and will pass either 3 Diamonds or 2 No Trump. If South chose Diamonds it will make for a good score. If he chose No Trump and the defenders set up the Hearts it's a disaster. Tough hand. I got it wrong at the table. 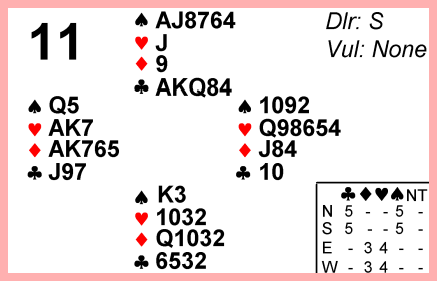 South passes and West decides against No Trump with 2 dangerous suits. He opens 1 Diamond and North stops to think. He counts 15 HCPs plus 2 for the Diamond singleton and 1 additional for the Heart singleton with the unsupported honor. He has too much for an overcall, so doubles (Big). East passes and South advances 2 Clubs, his best unbid suit. West considers bidding again, but partner could have nothing. He passes and now North stops to think. He considers 5 Clubs, but again partner could have nothing and he has a good fit in Clubs so he passes as well. It makes with overtricks for a good score.
The only reasonable alternative would arise if East decided to respond 2 Hearts with 5 points and the 6-card suit. West knows that his partner has less than 10 points or he would have redoubled. South might advance 3 Clubs or pass, but West is reasonably sure of a fit and can compete. It could go anywhere from there. 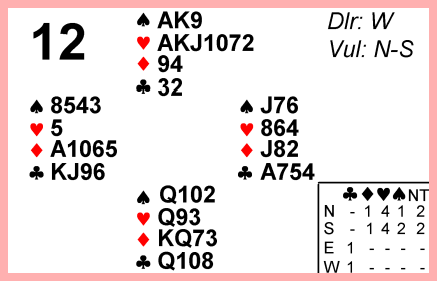 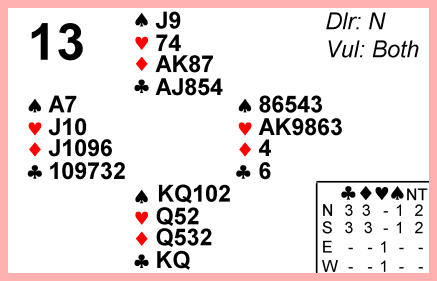 The play's the thing on this one.
North lacks the 17 points to reverse, so opens 1 Diamond. East overcalls 1 Heart and South doubles (Negative) to promise 4 Spades and 6 or more points. West passes and North rebids 2 Clubs. East passes and South rebids 3 Diamonds to show the fit and 10-12 points. North can't see enough for 5 Clubs, so passes. It makes for a decent score.
The only reasonable alternative is if South decides to respond 3 No Trump instead of raising Diamonds. He has 12 HCPs opposite partner's opening bid and thinks he has Hearts and Spades stopped and hopes for 9 tricks before East can run Hearts. It's no sure thing, but many players would take the chance for a vulnerable game. Two pairs made it, but it goes down against best defense.
West will surely lead the Jack of Hearts and East must play low to force the Queen of Hearts while West still (hopefully) has another Heart. South must take the Queen or lose it and then try to run 8 Clubs and Diamonds. West tenaciously holds on to both minors while East throws Spades and holds onto as many Hearts as possible. South gets 3 Diamonds and 4 Clubs to go with his Heart trick, but then must give up the lead to West. West wins any lead, cashes the Ace of Spades (if South didn't lead it) and crosses to East with his Heart for the rest. Down one. 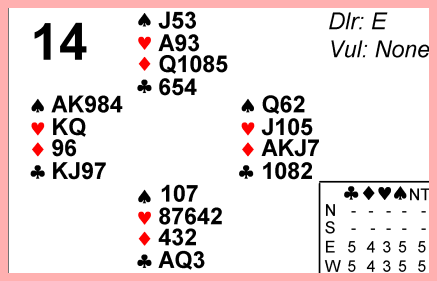 Games for everybody, but Jane was the only one to bid one and make it. Good Job! 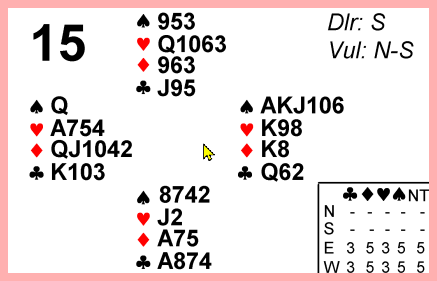 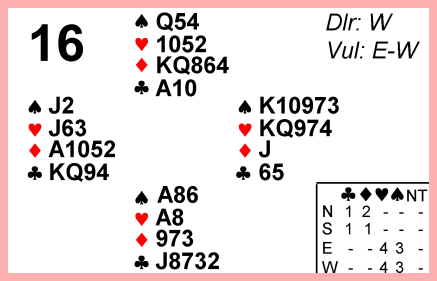 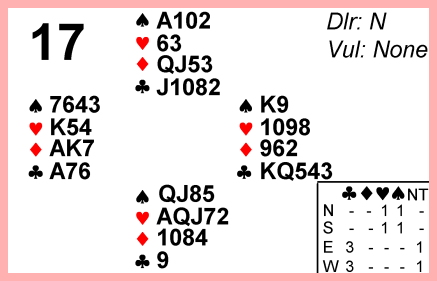 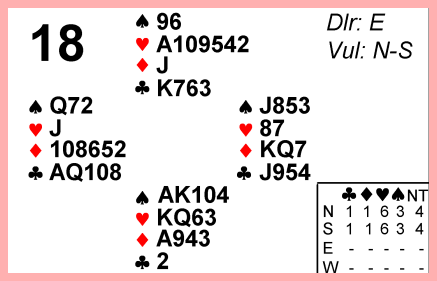 The only slam chance for today. Two pairs bid the game, but only Jane found an overtrick for the top. Good job!