A nice day for bridge. Congratulations to Walter and Sue for a super 68.06% for today's top. You've all done very well.

Next week we'll review Lesson 1, Hand Evaluation. Be ready with your questions if there's anything you're not comfortable with. Very important lesson. 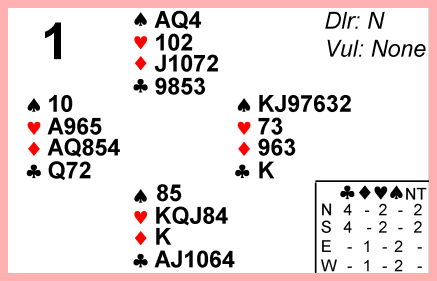 North passes and East stops to think. He doesn't have enough tricks for a 3 Spade preempt, but does qualify for a nonvulnerable weak 2 Spades. He decides to bid it and now South must stop to think. He needs a 6-card suit to overcall at the 3 level and a Diamond suit or 17 points to double, so he passes. West can't see a game, so passes. East makes 2 Spades for a decent score.
If East instead passes, South will open 1 Heart and West must pass. North must respond with his 7 points and can only bid 1 No Trump, promising nothing but 6 points. East will pass again and South stops to think. He doesn't like the look of 1 No Trump so decides to rebid 2 Clubs. This isn't forcing, but partner will definitely have to show preference. North must stop to consider rebidding 2 No Trump with his weak Diamonds or to pass. If he chooses to pass, partner should make 2 Clubs with overtricks. If he bids 2 No Trump instead he may or may not make it. One pair made 9 tricks in No Trump for the top and the other went down spectacularly. How's your play at No Trump? 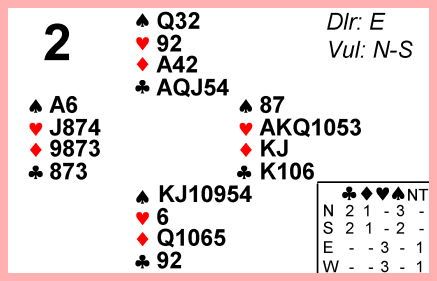 East opens 1 Heart with his 6-card suit and 17 points. South lacks the 11 points for an overcall if 1 Spade and his Spade suit doesn't qualify for a vulnerable jump weak overcall  (needs 2 of top 3 honors), so he passes. West raises to 2 Hearts with his 4-card support and 6 points and North isn't even close to enough for a 3-level overcall. East stops to reevaluate and think. His partner's support allow him to add 1 point for the fifth Heart and 2 more for the sixth. They have a good fit and at have at least 26 points between them, so he goes to 4 Hearts. He may make it or not, but he must bid it. 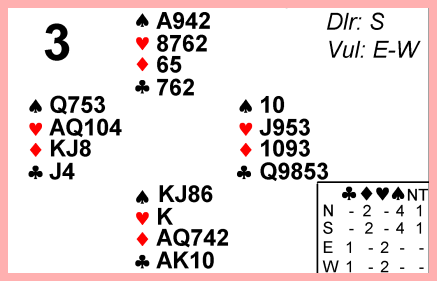 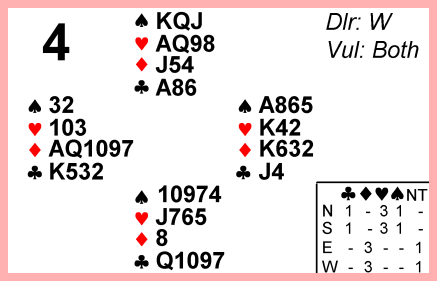 Herb makes 1 No Trump for the top, but two other pairs go down. How should it go?
North must open 1 No Trump with his balanced hand and 17 HCPs. No one else can bid. There are no options. The defenders should get at least 5 Diamond tricks plus the Ace of Spades and the King of Hearts. Good bid, bad luck. Herb must have gotten a very favorable lead. 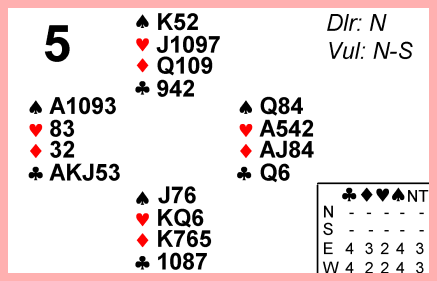 According to the computer analysis, 4 Spades is the best contract and 3 No Trump next. No one got near bidding or making 4 Spades, but Walter made 3 No Trump plus 1 for the top. How should it go?
North passes and East opens 1 Diamond. South passes and West stops to think. He counts 12 HCPs plus 1 for the Heart doubleton. He wants to get to game, but isn't sure where, so he responds 2 Clubs to show his 10 or more points and to force partner to describe his hand. North passes again and East stops to count and think. He lacks the 15 points to reverse to 2 Hearts, so must rebid 1 No Trump showing 13-16 points and no other bid. West must downgrade because partner has bid both his doubletons but he is still interested in game so shows his 4-card major  with 2 Spades. East has two suits and partner bid the other two, so decides to bids No Trump. Partner has only shown 10 points to go with his 13 HCPs, so he settles for 2 No Trump. West counts 12 HCPs and raises to 3 No Trump and they make it for the top.
This is a good example of partners sharing information to get to the right contract. 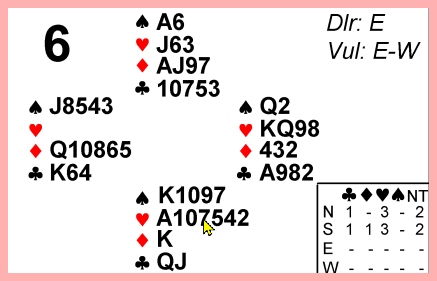 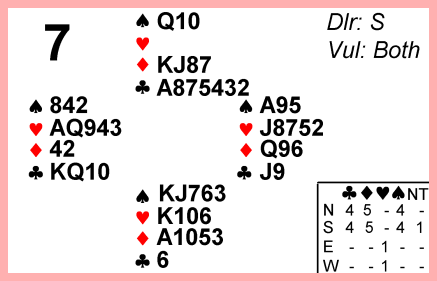 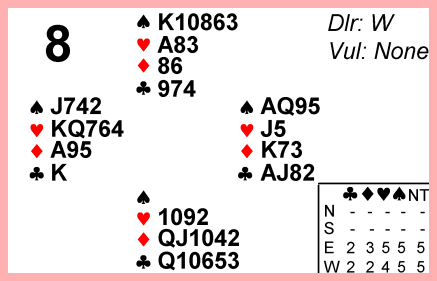 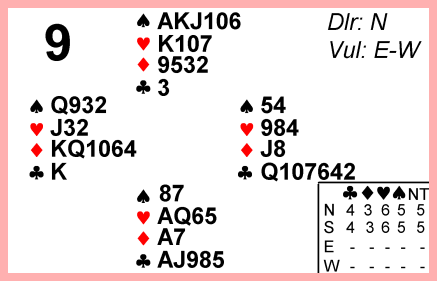 North opens 1 Spade with 11 HCPs plus 2 for the singleton with a nice 5-card major. East passes and South thinks No Trump, but isn't balanced and can't show his 4-card major, so bids 2 Clubs to show his 10 or more points and force partner to describe. North rebids 2 Diamonds to show his two suits. They've now bid 3 suits and South has the other with 15 HCPs opposite partner's opener, so he goes straight to 3 No Trump. He can get 5 Spade tricks, 4 Hearts and two other Aces for the top.
Other pairs made contracts in Hearts or Spades with a 4-3 or 5-2 fit. I tend to shy away from them when you have a perfectly nice No Trump. 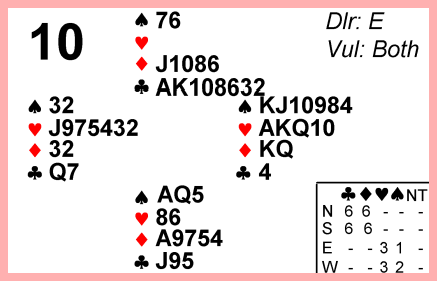 This is a very difficult board. N/S have a fantastic double fit, but East has the only opening hand. He opens 1 Spade and South lacks the points or suit for a 2-level overcall. He passes and West has only 2 Spades and 4 points, but considers a weak jump-shift. Let's say he bids 3 Hearts. North stops to ponder whether to overcall or pass. Let's say he bids 4 Clubs. East sees a huge fit and a Club void so raises to 4 Hearts. Now South sees a good fit and may or may not raise to 5 Clubs. Wow.
Let's look at a more cautious auction. East still opens 1 Spade and South still passes. This time West passes and North overcalls 2 or 3 Clubs. Now East stops to think. Partner may have nothing, but he has a good hand and hates to have it stolen. If he rebids Spades, he will go down. If he rebids 3 hearts, he limits his hand to 13-16 but can make it if West can resist raising to game. Whatever he does, South is likely to bid Clubs.
It's hard to see how East can come out ahead. E/W can always make 5 Clubs or set East in either major game. 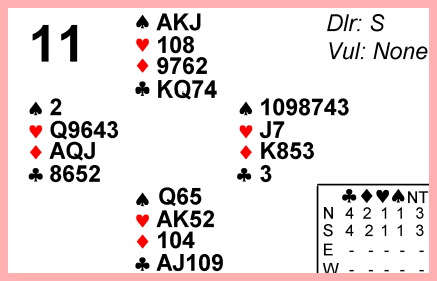 East opens 1 Club. West has 11 points and a 5-card major, but his suit is too weak to overcall so he passes. North sees 13 HCPs plus 1 for the doubleton and he's interested in game, so he responds 1 Diamond to show his 4-card suit and to force partner to describe his hand. East passes and South rebids 1 Heart. North now stops to think. He is still very much interested in game and is only concerned with the suit he bid, Diamonds. Partner probably doesn't have 4 of them, but might have 2 or three. His four gives him some protection, so he bids 3 No Trump.
It's very understandable that a student would settle for a safe 3 Clubs, but I think few experienced players would pass up the game chance. 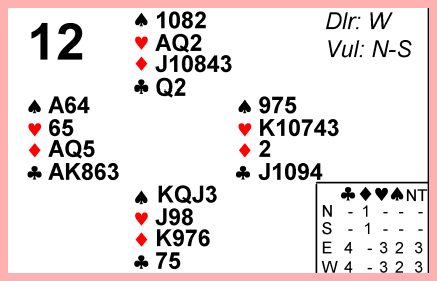 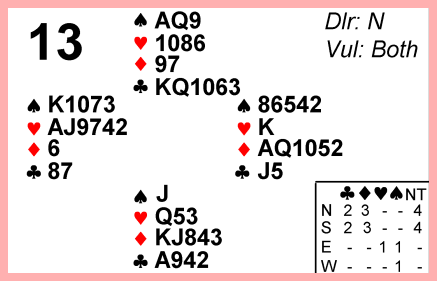 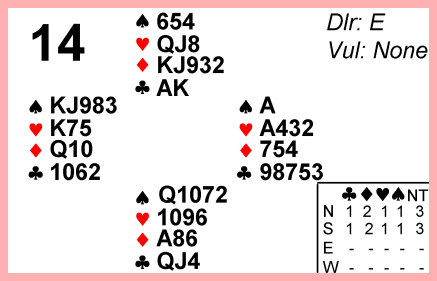 It floats to North who opens 1 Diamond. South must respond 1 Spade (2 Diamonds is out because that would deny his 4-card major and North may have only a 3-card suit anyway. North must bid 1 No Trump because he has no other bid and South must pass. It makes with overtricks for a top when no one can bid 3 No Trump. This seems pretty straightforward. 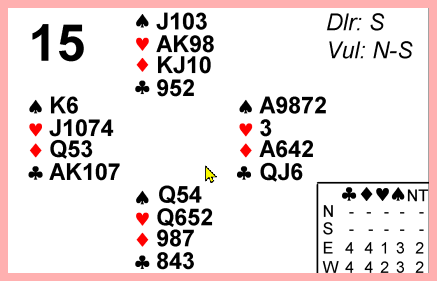 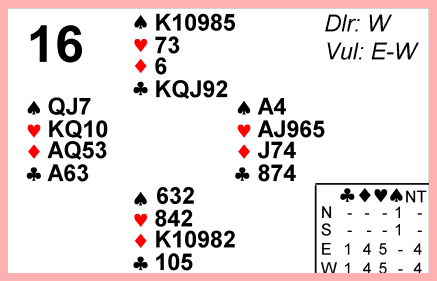 West has a balanced hand with 18 HCPs so opens 1 Diamond. North overcalls 1 Spade and East responds 2 Hearts with his 10 or more points and 5-card suit as promised. South passes and ponders 3 No Trump versus 4 Hearts. North's overcall of his weakest suit scares him off No Trump so he rebids 4 Hearts. It makes with an overtrick for the top. Easy peasy, but no one did it. Teachers bad! 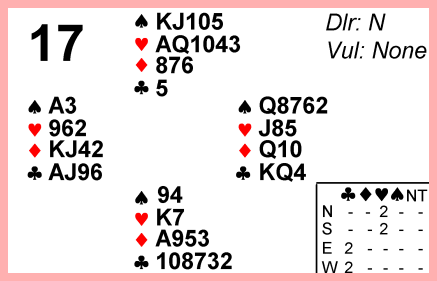 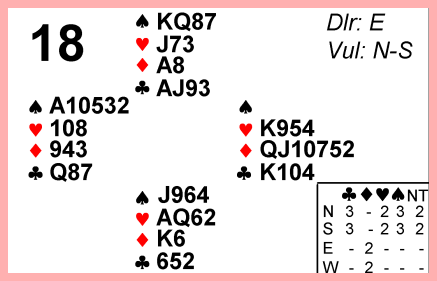