A lovely day for bridge with 4 nice tables. Congratulations to Wynne and Joe for today's top with a very nice 65.74%. You've all done very well.

Next week we'll continue Competitive Bidding with what happens after a take-out double. Be prepared with your questions. 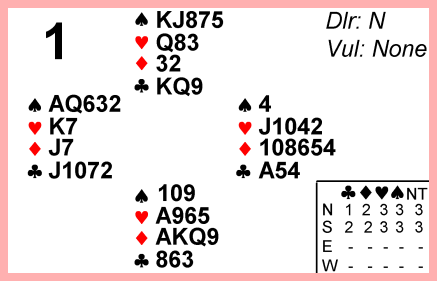 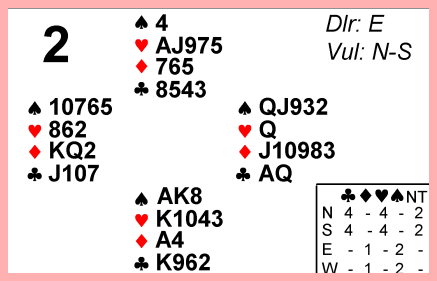 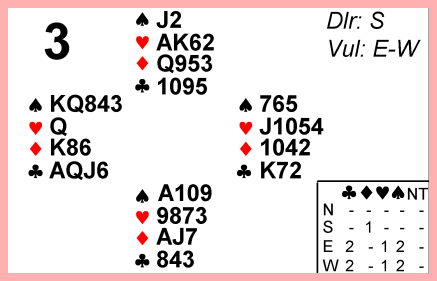 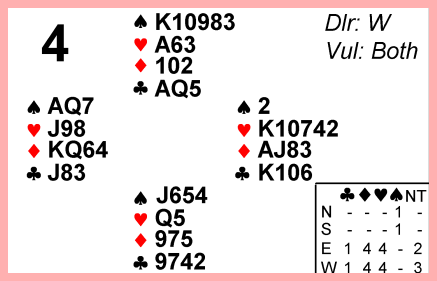 West counts 13 HCPs and subtracts 1 for the flat hand, but open opens 1 Diamond anyway (?). North overcalls 1 Spade with his 14 points and skinny 5-card Spade suit (?). East needs 10 points and a 5-card suit to respond 2 Hearts, but has it and does so. South passes and West stops to think. They have a good fit and at least 23 points between them and he's on the edge whether to pass or invite with 3 Hearts. His Heart support gives partner at least 1 more point and, if East has extra strength, there is a chance for game. He invites and East now counts 14 points and goes to game. They make it for a good score, but Wynne finds an overtrick for the top. 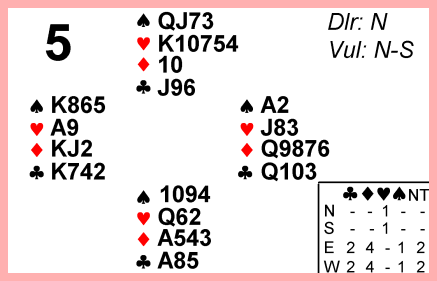 It floats to West who opens 1 Club with his 14 HCPs and a doubleton. North passes and East responds 1 Diamond. East can't rebid his 5-card Diamond suit, or show preference for either of partner's suits, so rebids 1 No Trump.  West passes and makes an overtrick for a decent score. Again, Wynne finds an extra trick for the top. This is how they win. 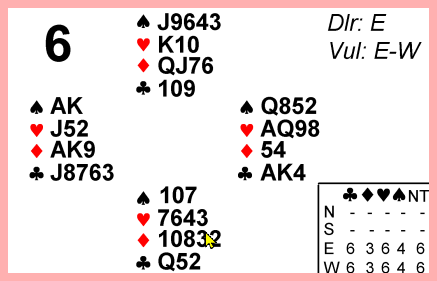 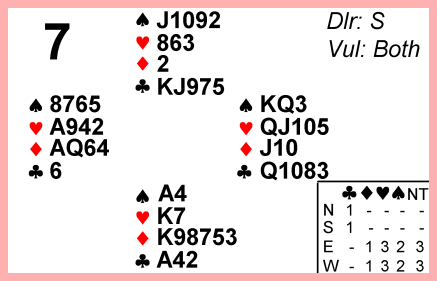 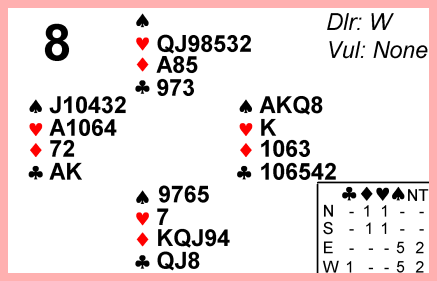 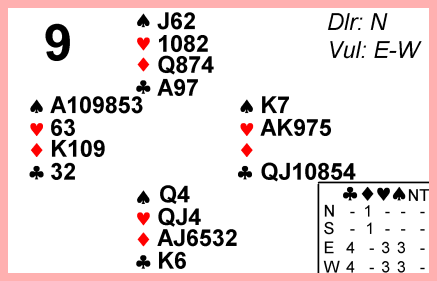 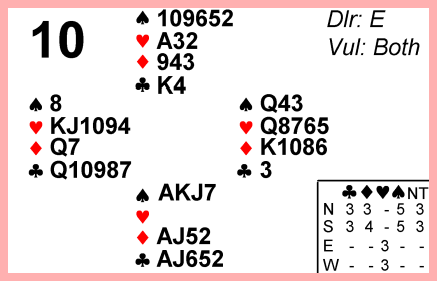 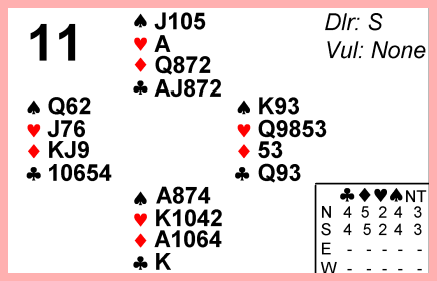 South has 14 HCPs, but downgrades to 13 with the singleton King. He opens 1 Diamond, West passes and North responds 2 Clubs promising 10 or more points and a 5-card Club suit. South isn't sure of game or a fit, so rebids 2 hearts (this isn't a reverse because of the 1 Diamond - 2 Club exception to the rule. North can't rebid his Clubs so must show preference for Diamonds. He now counts 12 HCPs plus 2 or three for the singleton Ace, and ponders whether to bid 3, 4 or 5 Diamonds. If he bids 3Diamonds, South will bid 3 No Trump, 4 Diamonds South will raise to game and 5 Diamonds, South will pass. It looks like he can't miss. Of course, they have to make 3 No Trump or 5 Diamonds if they bid it. 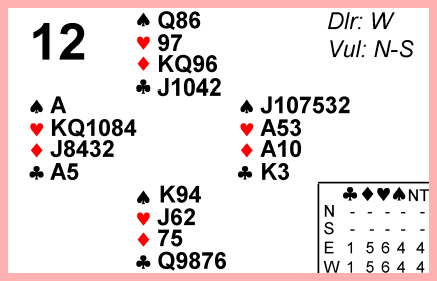 West opens 1 Heart and East responds 1 Spade to force partner to describe his hand. West can't rebid his Hearts, so rebids 2 Diamonds. Since partner didn't rebid the Hearts or jump-shift to Diamonds, East gives up any slam hopes and settles for the game in Hearts. No one made the slam, but one West got an overtrick. It looks like the slam requires a dummy reversal.  You're probably not ready for that, but the curious can look it up. 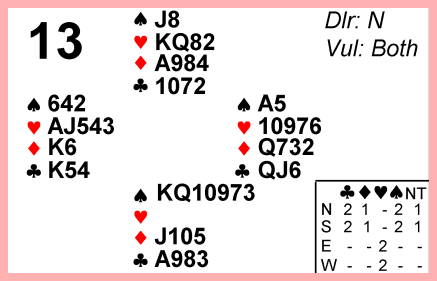 It floats to South who opens 1 Spade. West doesn't have the points or suit for a 2-level overcall, so must pass. North has 10 points, lacks the 5-card suit to respond 2 Hearts, so must respond 2 Diamonds. South rebids 2 Spades to show his 6-card suit and 13-16 points. North still has 10 points, but knows that his Spade support gives partner 3 more points. He raises to 4 Spades and partner makes it. The computer says it can't be made, but West made a friendly lead of the Ace of Hearts and declarer was able to ruff that, setting up the King and Queen of Hearts for Diamond discards. Sometimes you're lucky! 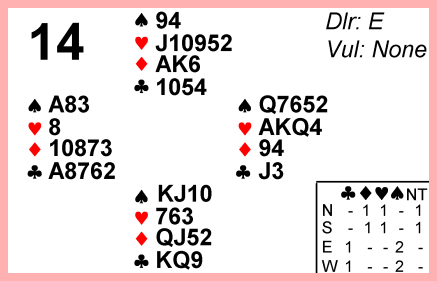 East counts 12 HCPs plus 1 for the Diamond doubleton and opens 1 Spade. South passes and West bids 2 Clubs to show his 10 points and force partner to describe his hand. East rebids 2 Hearts to show his two suits and only 5 Spades. West decides to settle for 2 Spades and East passes. It should make for a good score. 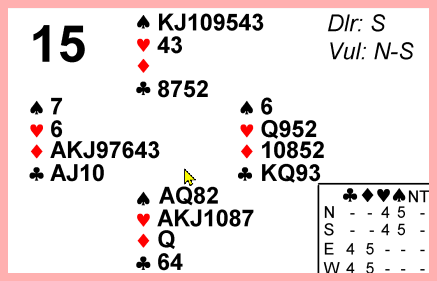 Talk about competitive hands! South opens 1 Heart with 16 HCPs and a lovely 6-card suit. West counts 13 HCPs plus 4 for the 2 Singletons to go with an 8-card suit. He doubles (Big) and North stops to think. He counts 4 HCPs, 1 for the doubleton and 3 for the void for a total of 8 points. It's not enough to redouble, but it is certainly an in-between hand. He knows that partner will know he doesn't have 10 points, so ponders 1, 2 or 3 Spades.
If North passes (?), East will jump to 3 Clubs to show his best suit and 9-12 points, South will compete to 3 Hearts and West will compete to 4 Diamonds, showing the Big Double. Whatever North does, East  knows that partner has 17 points or more and his Diamond support makes partner stronger. He will compete to 5 Diamonds.
Now it becomes important what North did. If North has passed throughout, South will be unable to compete and West will make 5 Diamonds for a good score. If North had bid Spades, South could compete to 5 Spades and make it for the top. If North had raised Hearts, South could compete to 5 Hearts and still get a top when he only went down 1 doubled and West made 5 Diamonds.
Don't you just love competitive bidding? 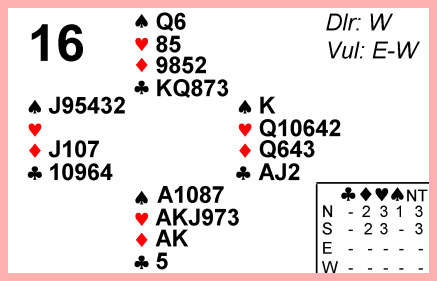 It floats to South who opens 1 Heart with his 19 HCPs plus 1 for his doubleton and 2 for his singleton for a total of 22. He's close to a 2 Club opening, but not Quite. North must respond 1 No Trump with his 7 HCPs. East passes again and South ponders whether to jump to 3 Hearts showing 6 or more Hearts and 17 or more points or Jump-shift to 3 Spades showing his two suits, 19 or more points and forcing to game. If he does the former, North will now count 7 HCPs and know that his Heart support add 3 points to partner's hand. He will raise to 4 Hearts which will probably go down when they get a bad trump split. If he does the latter, North will see no fit and will bid 3 No Trump which has a chance to make. Strangely enough, Wynne gets the top when her partner dumped her with her big hand and his 7 HCPs.
Bridge is a cruel game! 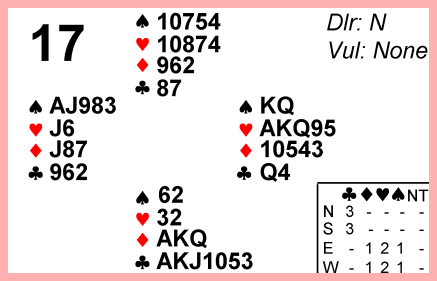 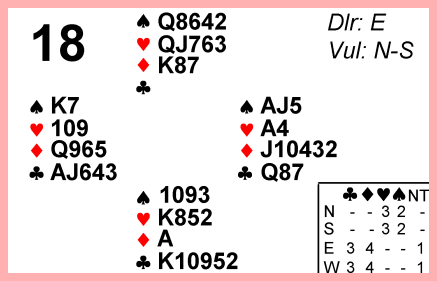