A chilly day. Fall is here!

Congratulations to Jane and Bill for today's top with a sizzling 75.69%. You've all done very well.

Next week we'll discuss overcalls and if everyone's ready we'll start take-outs. Be prepared to discuss it all. 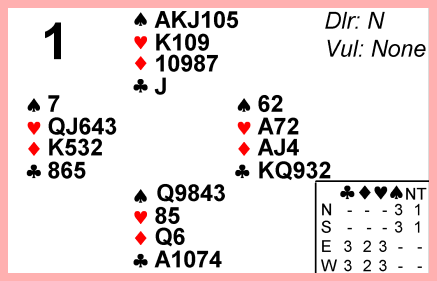 North opens 1 Spade with a good suit and 13 points. East doubles and South ponders whether to jump to 4 Spades with the 5-5 fit or just invite with 3 Spades with his 10-11 points. If he bids the game, he's likely to go down for a poor score. If he bids 3 Spades, West might sacrifice at a 4 Hearts. If West passes, North makes 3 Spades for a good score. Nasty competitive game, but good practice.
We'll learn soon that South should have redoubled after East doubled. So much to learn. Isn't it great! 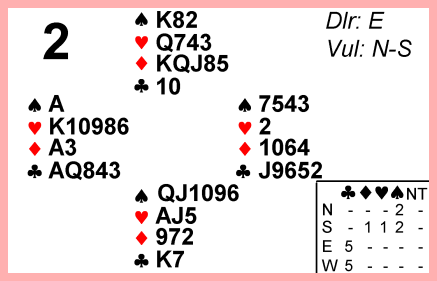 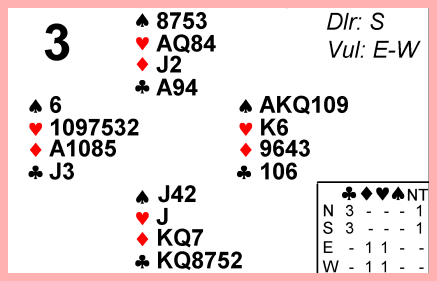 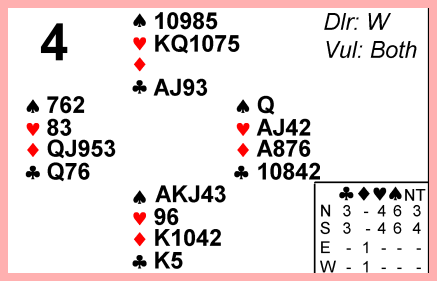 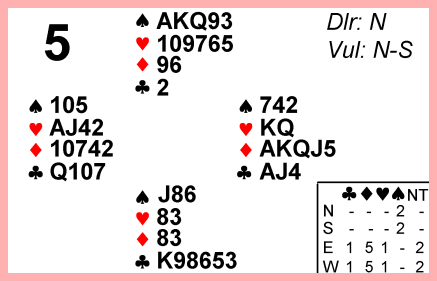 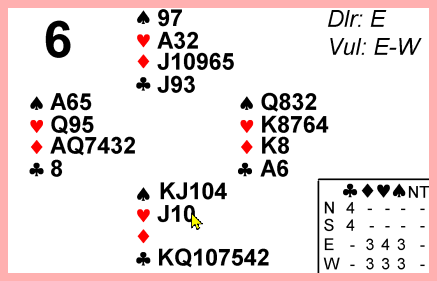 East opens 1 Heart with 14 points and a 5-card suit, South overcalls 2 Clubs with 13 points and a 7-card suit and West stops to think. He knows that he wants to be in at least 4 Hearts, so he considers forcing partner to describe his hand in case there is a slam chance. Since RHO has made a 2-level overcall, he decides to go straight to 4 Hearts to try to discourage a possible sacrifice. It makes for a good score, but Delores made the successful sacrifice. If both Easts had bid and made 4 Hearts, Delores would have had the top. 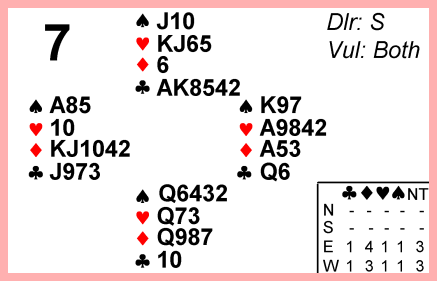 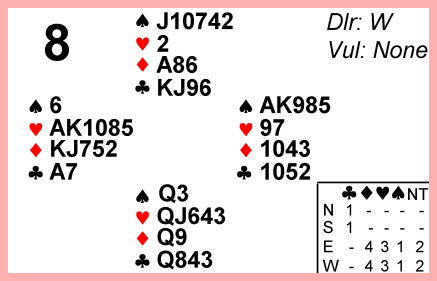 This board illustrates the basics of the requirement to show preference. We've talked about this extensively, but this example may help it sink in. West opens 1 Heart, North passes and East responds 1 Spade. West rebids 2 Diamonds showing 2 suits and 13-18 points. and East is faced with showing preference. He's not crazy about either of partner's suits, so considers the options. He must choose between Hearts or Diamonds unless he can bid 2 No Trump or rebid a 6-card suit. He lacks a Club stopper to bid 2 No Trump and has no 6-card suit so must choose between Hearts or Diamonds. He sees a likely 5-2 fit in Hearts and a likely 4-3 fit in Diamonds and is not sure. Fortunately, he can make either 2 Diamonds or 2 Hearts for a decent score. Rebidding a 5-card suit rather than showing preference is not suitable and is suitably punished. 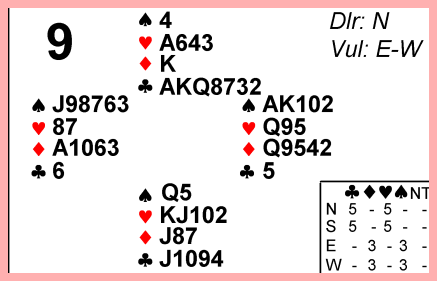 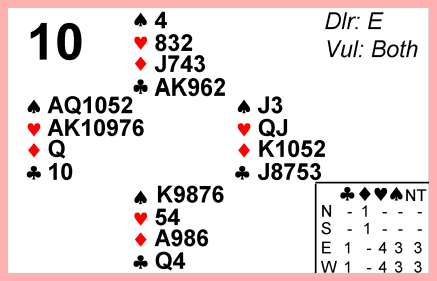 East and South pass and West opens 1 Heart with a pretty hand. North passes and East can't respond at the 2 level and must respond 1 No Trump with his 8 points. West reverses to 2 Spades to show his 17 or more points and both majors. East can only see 5 Hearts and 4 Spades for sure, but is forced by the reverse. He's not ready to show preference, but can bid 2 No Trump with his holding in the minors.
West isn't ready to accept No Trump so further describes his hand with 3 Spades showing 6 Hearts and 5 Spades. East now has adequate support for Hearts and knows that makes partner stronger, so raises to 4 Hearts. This hand has it all and illustrates a lot of things we've talked about. 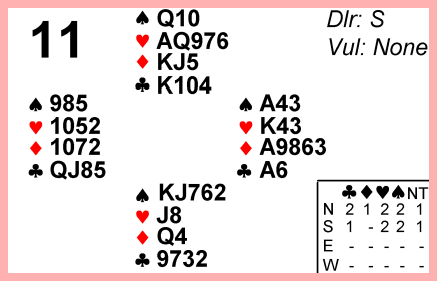 It floats to North who opens 1 No Trump. East likes his hand, but it neither suitable for a penalty double (only 3or 4 tricks) or a 2-level overcall (No suitable suit), so passes. South is required to decide whether partner is safer in 1 No Trump or 2 Spades. He responds 2 Hearts, Jacoby Transfer, and passes partner's puppet response of 2 Hearts. Fortunately either makes for a decent score. I have no idea how one pair got to 3 Hearts. They made it for a good score, but learned the wrong lesson. 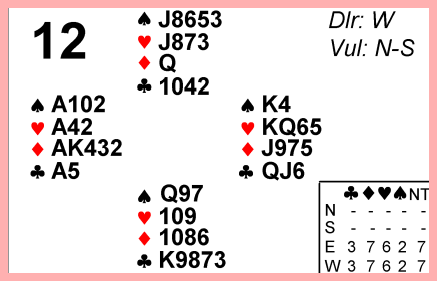 West opens 1 Diamond, intending to rebid 2 No Trump to show his 18-19 HCPs and balanced hand. East responds 1 Heart and West follows through with 2 No Trump as planned. East likes No Trump and counts 12 HCPs which gives them 30-31 HCPs. He considers slam, but has no Aces so the opponents could have 2 Aces or an Ace-King-Queen. He considers Gerber to check for Aces. If partner has all four, that makes both their hands stronger. If partner doesn't, he can still stop at a makeable 4 No Trump. He jumps to 4 Clubs and West responds 4 Diamonds showing all or none. East jumps to 6 No Trump and it makes for a great top. 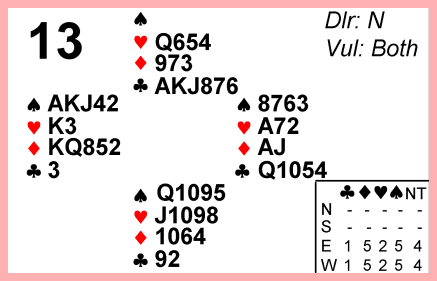 North opens 1 Club with 13 points and a good 6-card Club suit. East passes as does South. West doubles (Big) with his two 5-card suits and 19 points. North passes and East responds 3 Spades with his best unbid suit and 11 points. West considers slam, but partner has already passes and may have only 9 points. He settles for 4 Spades and makes an overtrick to tie for the top. 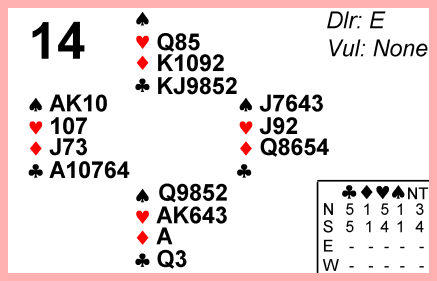 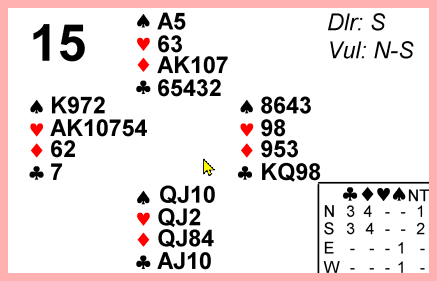 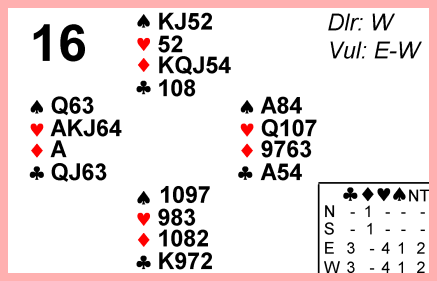 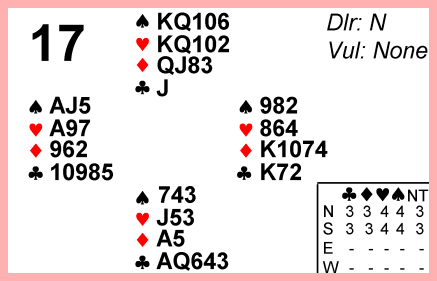 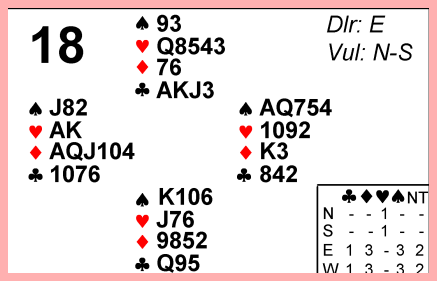