A lovely day for bridge. Congratulations to John and Joan and Bill and Jane for a tie for the top, You've all done very well.

Next week we'll cover a few odds and ends about overcalls and start take-outs. We'll cover doubles, redoubles, Michaels cue bid and unusual No-Trumps. Don't miss it and be ready to discuss them.

I'll try to post some comments on today's boards. Check back tomorrow to see what I've offered.

Always check here for any schedule changes before leaving home. 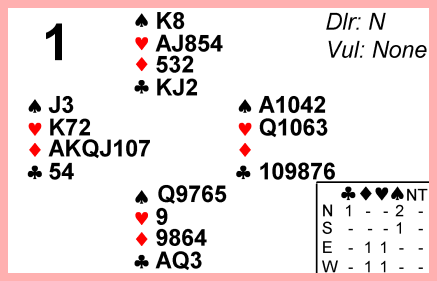 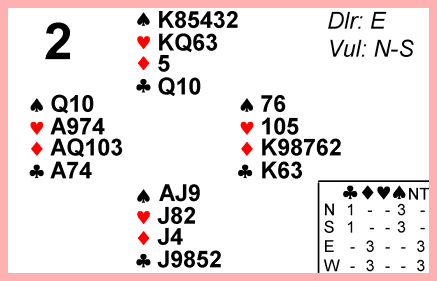 West considers 2 Diamonds, but doesn't have the necessary 2 out of the 4 top honors so passes. South must pass and West opens 1 No Trump.  North considers  overcalling in Spades, but is nowhere near strong enough for 2 Spades over 1 No Trump and his Spades are not good enough for 3 Spades, so he decides to defend. East considers transferring to 3 Diamonds, but the suit is weak and short and doesn't offer anything better than 1 No Trump. He passes as does South.
North will lead a Spade, but the suit is blocked in South and they can only run 3 tricks. As soon as South gives up the lead, declarer can run 6 Diamonds, 2 Clubs and the Ace of Hearts for 1 No Trump plus 2 for the top. No one did that, so take a good look at this hand. 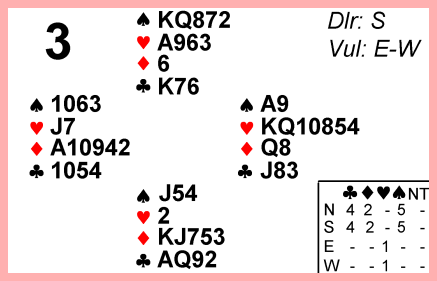 South has 13 points with a 5-card suit and opens 1 Diamond. West must pass and North counts 14 points and wants to find a game. He responds 1 Spade to force partner to describe his hand and East stops to think. He has the required 13-16 points and 6-card suit, so overcalls 2 Hearts. South now stops to think. Partner has only promised 4 Spades and 6 points and he has a minimum opener. He can't reverse to 3 Clubs or rebid his 5-card Diamond suit. He can't bid No Trump with his singleton in opponents suit. His only options are to pass or raise Spades with 3-card support, hoping partner has 5 of them or a solid suit. If he does the former, they'll set 2 Hearts, but if he dares the Spade bid, they'll get to game for a top. What would you do? 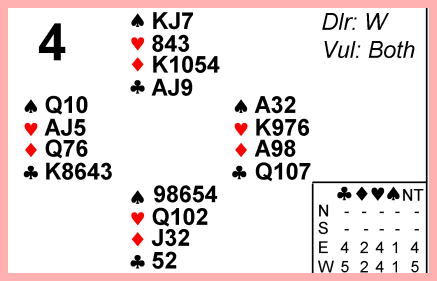 West passes as does North. East opens 1 Club in third seat with his minimum and South passes. West responds 3 Clubs promising 5-card support, 10-12 points and denying a 4-card major. East will pass with his minimum and make an overtrick for a top. Game is possible in No Trump or Hearts, but it's hard to see how they get there. 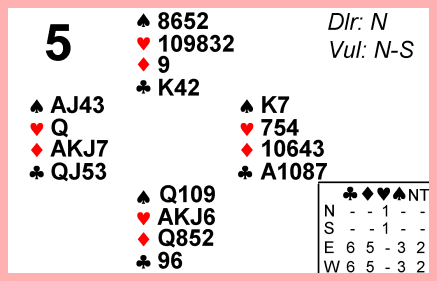 Poor Joan opened a sub-minimum 1 Diamond and the roof fell in. Ugh! If she passes, West opens 1 Diamond, North passes and East stops to think. He has a minimum, but must respond with his 7 HCPs. He ponders whether to respond 2 Diamonds when partner could have only a 3-card suit or 1 No Trump promising only 6 HCPs. Whichever he does, West has 18 HCPs and will probably look for more.
After a 1 No Trump response, West will think about 3 No Trump but will probably beware with his singleton. He might pass or rebid 2 Clubs to show at least both 4-card minors. East will have to show preference, but whichever he chooses will make with overtricks for a decent score.
After a 2 Diamond response, West will probably just pass. Despite the computer showing a game and a slam in the minors, I just don't see how to bid them. 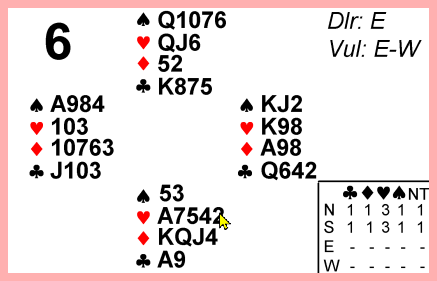 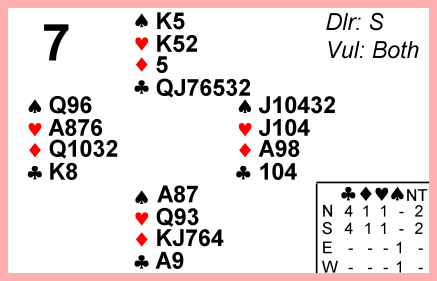 South opens 1 Diamond, West must pass and North lacks the 10 points to respond 2 Clubs, so must respond 1 No Trump. East must pass and South will pass as well with his 14 HCPs opposite a possible 6 points. It should  make for a decent score. I see no way for East/West to get into the bidding. 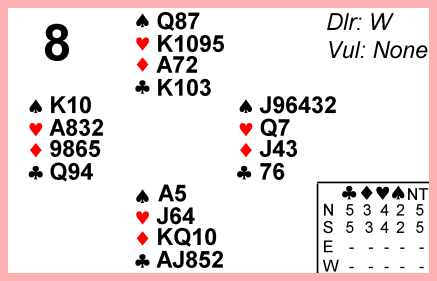 West must pass, as does North with his flat 12 points and East with his 6-card Spade suit not adequate for a weak-two opening. South will open 1 No Trump with his balanced hand and 15 HCPs. West must again pass and North will either use Stayman to look for a Heart fit or just raise to 3 No Trump. Either way, that's where they will end up. It will make with an overtrick or two for the top.
I have no idea how one pair ended up in 3 Clubs, but it was a poor second in any case. 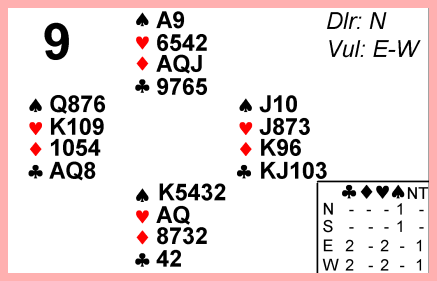 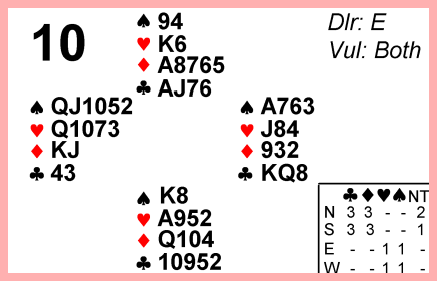 It floats to North who opens 1 Diamond with his 14 points and 5-card minor. East must pass again and South will bid up the line to 1 Heart. West must pass and North will rebid 2 Clubs to show his two suits and 13-18 points. South stops to reevaluate and think. He has a fit and 10 points. Partner may have only 13 points and 3 Clubs might be chancy, but he might have a chance for game. He raises to 3 Clubs hoping that partner can make it even if there is no game. Partner couldn't although the computer says it could. Hmm.
I can see  1 Spade, 2 Hearts, 2 or 3 Diamonds, two Clubs and 2 Heart ruffs, for 9 possible tricks. This would require very careful play and I'm not sure any human could make it. Good try, bad luck. 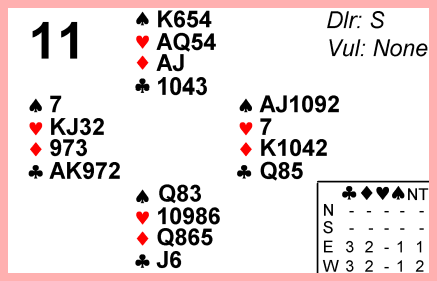 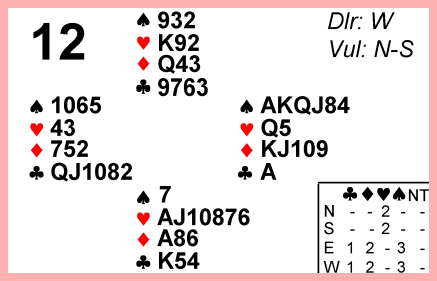 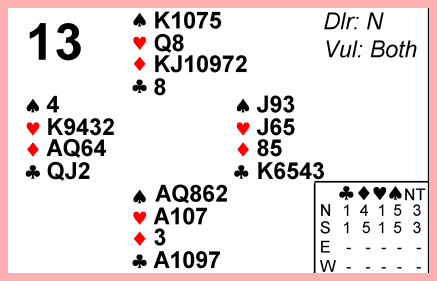 North considers 2 Diamonds, but it doesn't meet the requirements for a weak-two bid (4-card major on the side has too much potential) so he passes. East must pass and South opens 1 Spade with his 5-card suit and 16 points. West must pass and North raises to 3 Spades with his 4-card support and 12 points. South reevaluates to 17 points with the trump support and makes it for the top.
That's nice, but Herb learned a lesson and that's what we're here for. That's nice too. 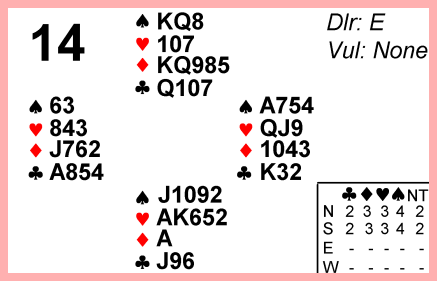 East must pass and South opens 1 Heart with his 5-card suit and 15 points. West passes and North responds 2 Diamonds with his 5-card suit and 12 HCPs. South has the required 15 points to reverse over partners 2-level response, so rebids 2 Spades. North can't rebid his 5-card suit or raise either of partners majors, so must rebid 2 No Trump. South will pass and make it.
North at the other table thought he had to lie with 3 Spades, but had a perfectly honest 2 No Trump. They got the top, but that wont work very often. 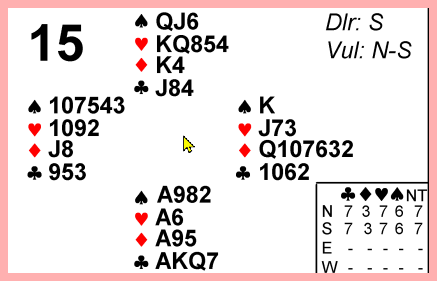 Both tables made a slam, but neither bid it. Could they?
South opens 2 No Trump with his balanced hand and 21 HCPs. North has 12 HCPs for a total of 32 or 33. He wants to be in slam and stops to consider how to proceed. He has no Aces and the opponents could conceivably have 2 Aces, but that's unlikely so he decides not to worry about it. He's not sure sure whether 6 Hearts is feasible and he has another point with the doubleton, but the transfer is awkward with 5 Hearts and he doesn't want to risk partner passing short of slam. He decides to just jump to 6 No Trump. It makes with an overtrick for the top.
It appears that North at both table bid a super-cautious 3 No Trump and South had to pass. Understandable for a student, but as you gain confidence you'll be alert to these possibilities. 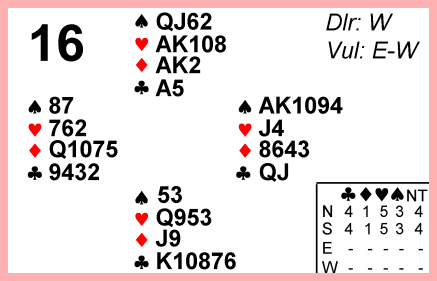 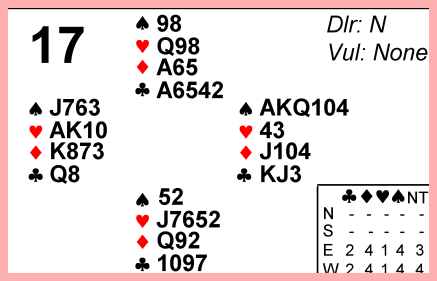 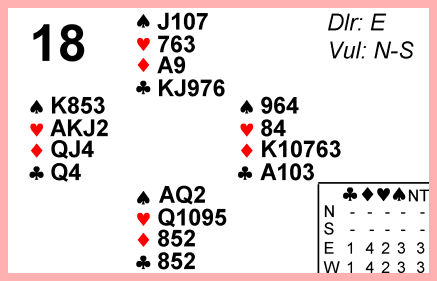