A dank day but good for bridge. Congratulations to Joe and Harriet for a super 68.06% for today's top. You've all done very well.

Next week we'll have a review of overcalls to be ready to start takeout doubles. Be ready to discuss.

I'll try to add comments on some of the boards. Check back tomorrow.

See you next week, Dave 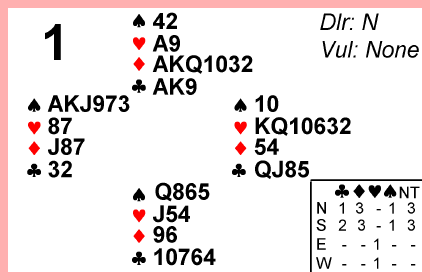 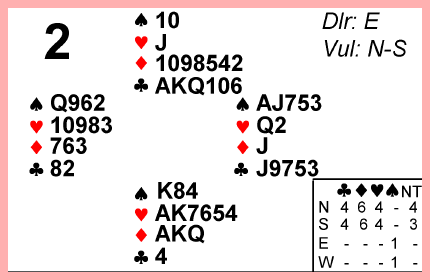 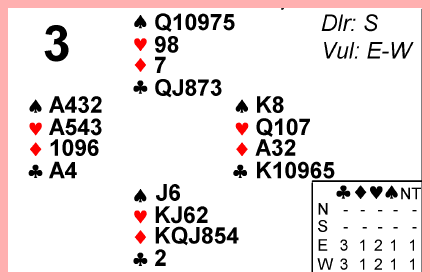 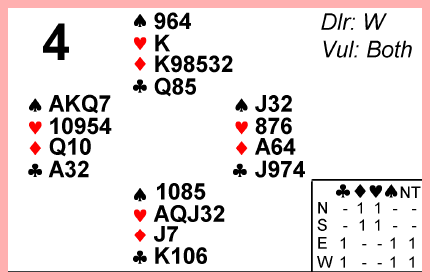 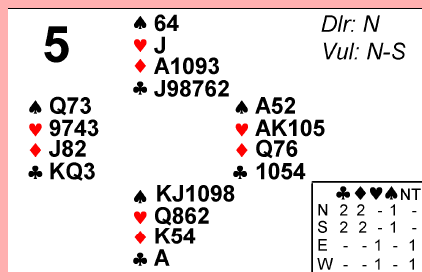 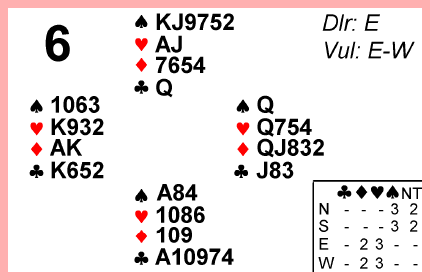 East and South pass and West opens 1 Club. North overcalls 1 Spade promising 5 or more Spades and 11-16 points. East doubles (Negative) promising a 4-card Heart suit and 6 or more points. South doesn't have enough to invite game, so passes. West raises to 2 Hearts and North stops to think. Partner may have nothing and he has a minimum opener so he passes. East passes and South stops to think. He still doesn't have enough to invite game, but the Spade fit and 9 points is enough to compete. He raises to 2 Spades. He still has only 14 points and partner may have only 6 points. Does he really want to compete at the 3 level. If he passes, North will make 2 Spades with an overtrick. If he bids 3 Hearts, North will probably compete to 3 Spades with his 6-card suit and reevaluated 14 points. Same result whatever West does.
This board nicely illustrates the difference between South inviting or competing. 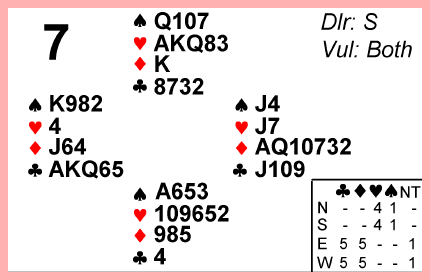 South passes and West opens 1 Club. North overcalls 1 Heart to promise 5 Spades and 11-16 points. West lacks the 10 points to bid a new suit at the 2-level. He doesn't want to raise partner's Club since partner might have only three and that requires at least 5 Clubs. His hand is not really right, but he makes a weak jump-shift to 3 Diamonds. South has a weak freak with at least a 5-5 fit in Hearts and some ruffing potential with his 2 doubletons. He ponders 3 Hearts or 4 Hearts and whichever he chooses should make for a good score.
A lot of compromises here, but that happens with competitive bidding. 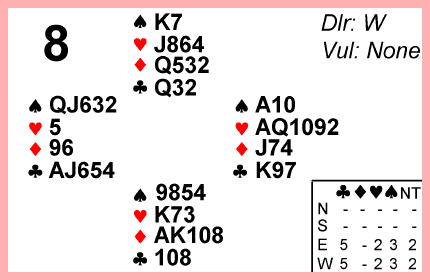 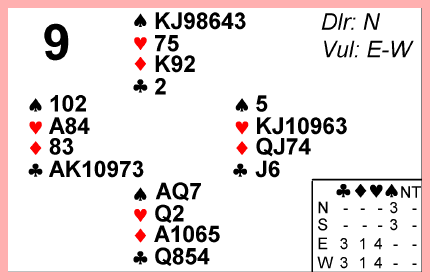 Competitive bidding often ends up with  both sides needing to figure out what they can make and what the opponents can make. On this board North opens 3 Spades and West must decide whether the opponents can make their bid or not. If he thinks they can't, he must decide whether his side might have game. If not he'll pass. If he decides they can make it, he must decide if he will do better risking going down and how many he can afford. Most pairs weren't sure, so passed. Then South has to decide whether they might make game or not. He knows that partner has 6 sure tricks and adds two for his Aces. Partner must find another trick just to make his bid, so South passes. Now West must decide the same factors. If he thinks North can make 3 Spades, he must decide how many he would go down at 4 Clubs doubled and vulnerable and still be better that the opponents making 140 points. Since down one doubled and vulnerable loses 200 points, he can't afford it and passes.
At one table, East apparently decided that the opponents could make 3 Spades and therefore bid 4 Hearts, hoping he could make it or go down one not doubled losing only 100 points. South now fears East can make it so raises to 4 Spades, hoping to make it,  or go down only 1 Doubled and vulnerable for 200 points or down 2 for only 500 points, both of which are better than giving up 620 points for a vulnerable game. Now West is in the spotlight and figures that if partner can bid 4 Hearts, he can raise to 5 Hearts with his good trump support and an outside Ace-King. He does so and they only go down 1 not doubled for minus 100 and a top.
Now that it's all done we can analyze whether this bidding was well founded or not. I think North's 3 Spade opening was very slim and that he was very fortunate to find such strong support by partner. East was correct that the opponents could make 3 Spades, but he was thin to compete when he might be down one doubled and vulnerable for 200 points. Again, he was very fortunate that partner had great support and he could make it. East's decision that East could make it was sound and he had little risk being not vulnerable. He could go down 3 doubled for only 500 points, much better than the opponents making 620. Now it's West's turn. He decides that North can make 4 Spades, but they can't. When he raises to 5 Hearts, he's taking great risks when he could just pass for a positive score. This is called a "Phantom Sacrifice" and rarely pays off, especially when vulnerable. Finally, back to North/South. One of them must double. You can't let them push you around like that when a double gives you the top.
I know this seems complicated and confusing, but that's competitive bidding. You really have to work hard on this lesson and be sure that you understand everything. I'll keep answering questions until you do understand, if you keep asking them. 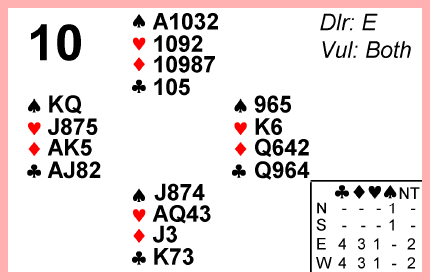 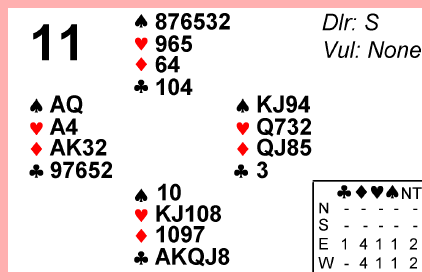 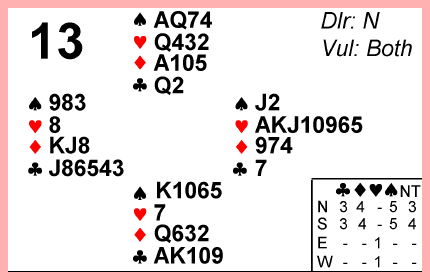 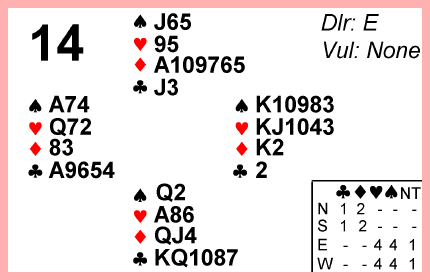 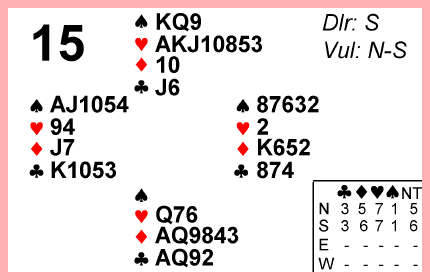 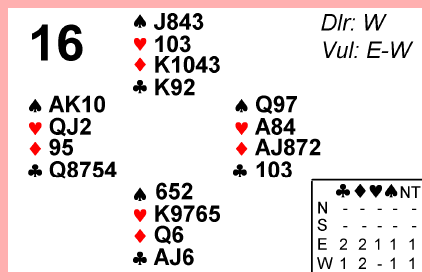 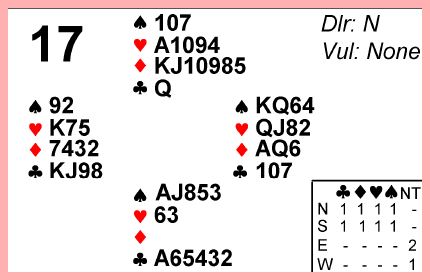 This board illustrates the need to plan and how little things can make all the difference.
North's hand is not suitable for a weak 2 Diamonds with it's 4-card major side suit, so he passes. East opens 1 Diamond, South passes and West must respond 1 No Trump, promising 6-10 points and denying a 4-card major. North passes again and East, with a minimum and no fit, passes. North leads the Jack of Diamonds and declarer stops to count and plan.
Declarer sees only one sure trick and that he will need to give up the lead several times. He must hold on to his stoppers as long as possible. He plays the Queen of Diamonds from dummy and gets good news when it holds and bad news when South discards. North is now very much the danger hand. Declarer attacks the Hearts immediately by leading his Queen, preserving dummy's King as a future entry if needed. North wins the Ace and leads another Diamond and declarer wins with the Ace. He now needs for the remaining Aces to be in South and fortunately this is likely since North has already shown 8 HCPs and didn't open. Declarer now attacks the Clubs by leading low to dummy. South plays low, but declarer must assume he ducked the Ace, so puts up the King which holds and as a bonus drops North's Queen.
Declarer stops again to think. He has taken 3 tricks and set up at least 2 Heart tricks. He can set up 2 More Club tricks by forcing the Ace, so leads to his 10 and South's Ace. If South now cashes his Spade Ace, declarer has 9 tricks and if he leads anything else declarer has 8 tricks.
I'm pleased to report that Sue did everything right, but I must also admit that I carelessly put up the Jack of Clubs instead of the King and went down. 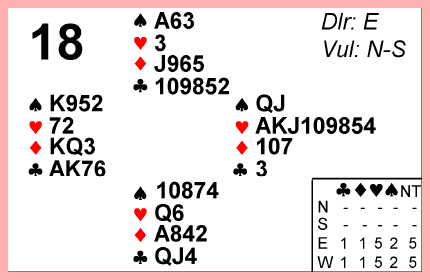