Nice day to be inside playing bridge. Congratulations to Debbie and Delores for a super 69.44% for today's top. You've all done very well.

I'll try to add some comments to today's boards. Check back tomorrow to see what I've done.

See you next week. 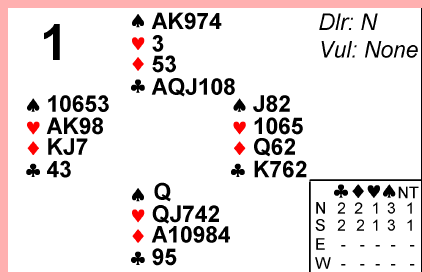 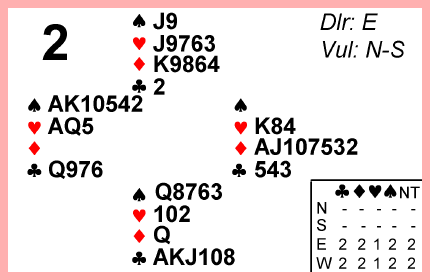 Nasty board! East is weak for 1 Diamond and can't open 2 Diamonds with a void so tries to talk himself into 3 Diamonds. He has the 7-card suit but the required 6 tricks is questionable. He passes and South counts 12 HCPs plus 1 for the doubleton so opens 1 Spade. West can neither overcall nor double so passes, hoping they stay in Spades. North counts 5 HCPs plus 2 for the singleton so must respond 1 No Trump promising nothing but 6 points. East lacks the required 13-16 points to overcall 2 Diamonds and 3 Diamonds looks no better than it did the first time, so passes. South is on the spot with his minimum opener and 5-card major. He considers 2 Clubs, but that forces partner to show preference and may get them deeper in trouble. He sees that he's in a hole and decides to stop digging. He passes and hopes they can get 7 tricks. They can't. 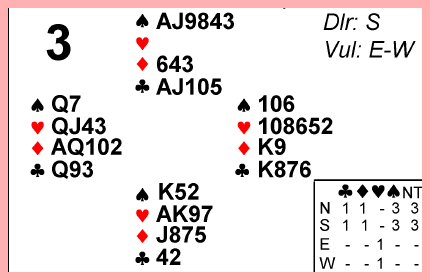 South passes and West stops to count and think. He sees 13 points, but it isn't a good 13 with the 5 Quacks. He passes and North opens 1 Spade with his 6-card major, 10 HCPs plus a void and a good second suit. East passes and South responds 2 Diamonds with his 3 Spades and 12 points. He plans to support the Spades next time. West must pass and North rebids 2 Spades to show his 6-card suit and 13-16 points. South still has his 12 points but knows that his Spade support gives partner at least 16 points, so raises to 4 Spades. The defenders should get 3 Diamond tricks and a Club for down 1.
Good bid, but bad luck. 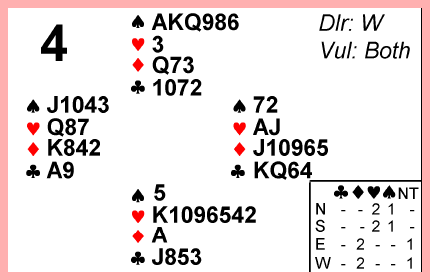 West passes and North opens 1 Spade with his 11 HCPs plus 2 for his singleton Heart. South must respond with his 8 HCPs and squeezes out what he hopes is enough to bid 2 Hearts. North is forced to respond despite having to downgrade his hand and rebids 2 Spades. South still likes his Hearts, but there is no way he can go to the 3 Level. He passes and declarer goes down only 1. 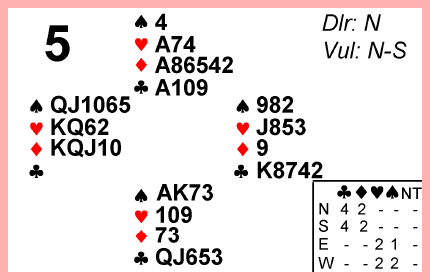 North opens 1 Diamond with his 3 Aces plus a singleton. South responds 2 Clubs to show his 5-card suit and 10 or more points. North rebids 3 Clubs with the sure fit and South reevaluates to 13 points and invites with 3 Clubs. North passes with his minimum. It makes with an overtrick for the top. Good job John and Joan! 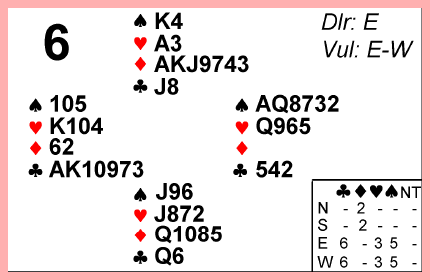 East can open neither 1 Spade or 2 Spades, so passes. South passes and West squeezes out 1 Club with his 6-card suit, 12 points and 3 prime honors. North doubles for takeout (big) with his 18 points and East redoubles with his 3-card support, 11 points and 6-card major. South knows that West will pass if he does and that partner will have to bid. He has support for all the unbid suits, so passes. West does pass and North bids 1 Diamond. East bids 1 Spade, South raises to 2 Diamonds and West rebids 2 Clubs to show his 6-card suit. North reevaluates to 23 points and jumps to 5 Diamonds. East and West pass and declarer goes down several, but he did keep his opponents out of game or slam. 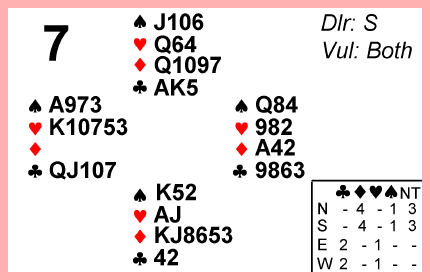 South opens 1 Diamond, West doubles for takeout and North redoubles. East doesn't care what East chooses to bid so passes as does South. West bids 1 Heart  and North stops to think. He has no idea how many Diamonds partner has (Could be 3), so rebids 1 No Trump. East passes and South must choose between 2 Diamonds and 2 No Trump.
If they continue to 3 No Trump it will make for a top. If they continue to 5 Diamonds they will go down. Tough hand to get right. Good job, Debbie and Delores. That's how you win. 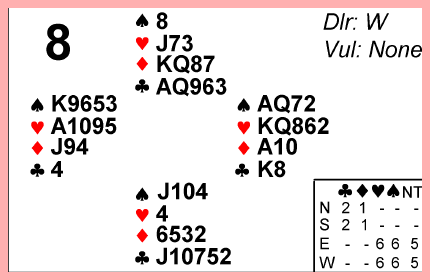 Two pairs got to 4 Hearts and Herb took 12 tricks for the top. Should they bid the slam? In Spades or Hearts?
West passes and North opens 1 Diamond (He doesn't have enough to reverse). East counts 20 points and doubles (Big). South passes and West advances 2 Spades to show his best suit and 9-12 points. North passes and East stops to reevaluate and think. He now sees 21 points and a total of 30-33 points and he's interested in slam.
East has two choices as to how to proceed. Should he assume they have enough strength and find out if they have at least 3 Aces or vice versa? He decides that if partner has 11-12 points, he'll surely have an Ace so he jumps to 5 Spades to invite slam. West reevaluates to 11 points and raises to 6 Spades. He makes it for the top. Nice work if you can get it! 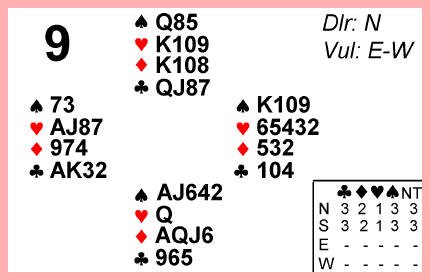 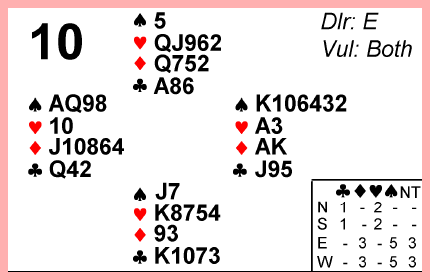 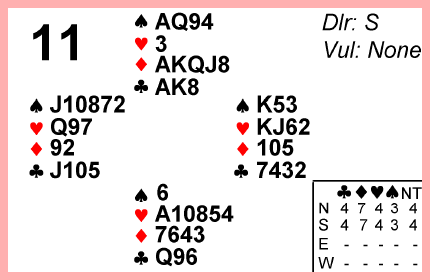 Everyone did well here and the only question remaining is whether they should bid the slam?
It floats to north who counts 25 points with a 5-card suit. He opens 2 Clubs and South  responds 2 Diamonds to let partner describe his hand. North can't count 11 sure tricks so he rebids 3 Diamonds to tell partner that he needs a little help for game. South counts 10 points and raises to 4 Diamonds.
(It is important that you understand that any rebid by South forces to game. If he didn't think he had enough, he would pass. His response of 4 Diamonds is stronger than 5 Diamonds. The latter says that he thinks he has just enough for game and partner would pass. The former promises extra values and partner will consider slam)
In this case North will go to 6 Diamonds and make it for the top. Yes, they should bid the slam (probably after a few more lessons). 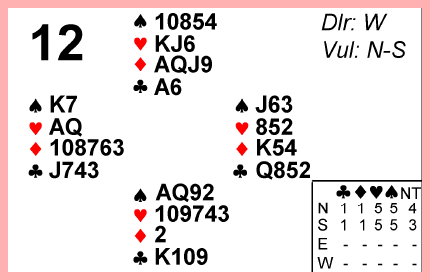 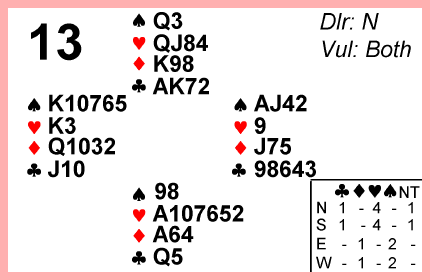 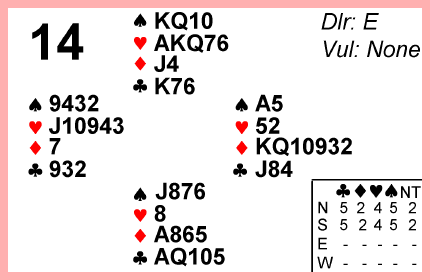 East opens 2 Diamonds, South passes as does West. North doubles (Big), East passes and South advances 3 Diamonds, a cue bid saying he has enough for game and wants partner to bid his best suit. North bids 3 Hearts and South bids 3 No Trump. West leads the 7 of Diamonds and declarer stops to count and plan.
Declarer sees 7 sure tricks: 3 Hearts, 1 Diamond and 3 Clubs. He hopes for another with a 3-3 Club fit, but then needs to attack the Spades. If East has it, he will take the remaining Diamonds for down 1, so he assumes that West has it. He knows that West has no more Diamonds so decides to take the first 8 tricks and play a Spade so at worst he'll only be down 1. He leads a Spade on the ninth trick, but unfortunately East takes the Ace and has 4 more Diamonds for down 1.
Good bid, bad luck. 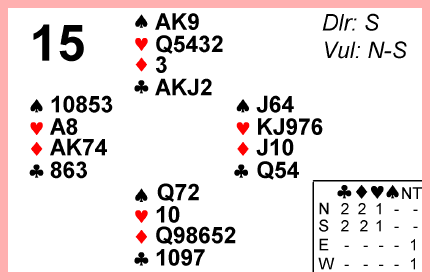 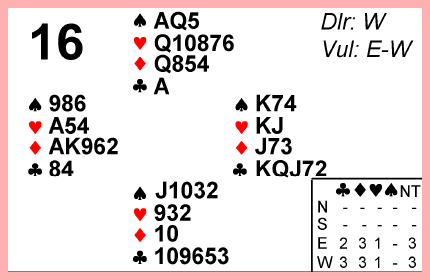 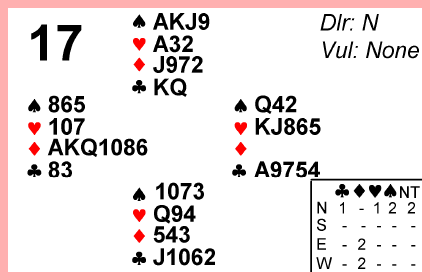 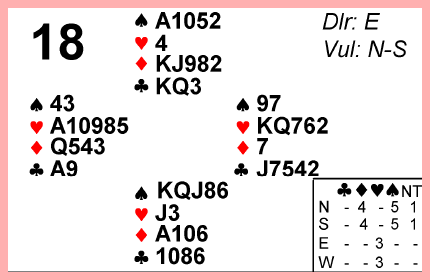