It was great to be back and see you all again. Congratulations to Delores and Muriel for 56.25% for today's top. You've all done very well.

Next week we'll continue with the No Trump Openings worksheet. We had some good discussions today.

I'll try to add some comments to today's boards. Check back tomorrow to see what I've said.

See you next week,  Dave 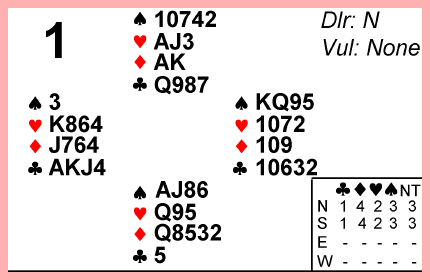 North counts 14 HCPs plus 1 for the doubleton Diamonds and opens 1 Club. South counts 9 HCPs and responds 1 Diamond. West counts 14 points but can neither double nor overcall, so must pass. North must show his 4-card major and rebids 1 Spade. South reevaluates in support of Spades as 11 points and jumps to 3 Spades. North is on the fence with his 15 points. If they have adopted an aggressive style, she'll bid game and go down. The cautious North's win this one. East opens 1 No Trump and North/South can't get into the auction. For East/West it boils down to who goes down the least. Difficult hand. 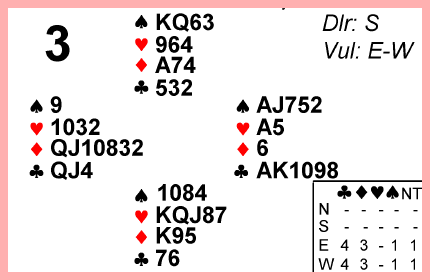 It floats to East who opens 1 Spade with 19 points and his 5-card major. West must respond with his 6 points and bids 1 No Trump to promise at least 6 points. East doesn't care for No Trump so rebids 2 Clubs to show his 2 suits. West prefers Clubs so passes with his minimum. East makes it with overtricks for the top. This one shouldn't be that hard. 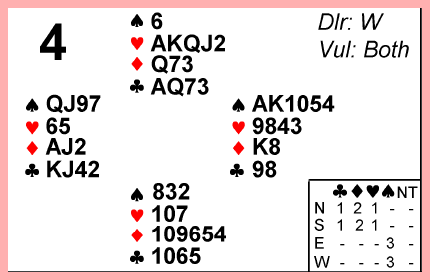 West evaluates his hand as less than a good 13 points, so passes. North counts 18 HCPs plus 2 for the singleton and opens 1 Heart. East overcalls 1 Spade with his 12 points and good 5-card major. South passes and West stops to reevaluate and think. He now sees a good fit with 12 HCPs plus 1 for the doubleton and another for the 4-card support. He knows that his trump support makes partner stronger by at least 1 point for a total of at least 12. He ponders whether to invite with 3 Spades or just go to game.
He considers that he already passed and an invitation tells partner to go to game with the top half of what he promised, which would be 14-16 points. Does he want to risk partner passing with 13 points which should be enough. He considers their agreed on style, aggressive or cautious. If aggressive he rebids 4 Spades and probably goes down. This time the cautious win.
The overly cautious let the opponents play and make 1 Heart. That's just lame! 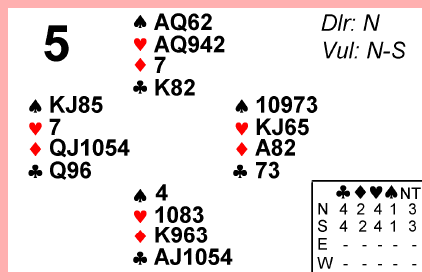 North opens 1 Heart and South stops to reevaluate and think. He has adequate Heart support 10 points, but needs 4-card support to jump to 3 Hearts. He responds 2 Clubs to show his 10 points and force North to describe his hand. North has enough strength to reverse so rebids 2 Spades. South now wants to show his Heart support, but does he want to bid 3 or 4?
South knows that partner has at least 15 points for the reverse and Knows that his support adds at least 1 point for the fifth Heart. That gives them at least 26 points between them, so South raises straight to game. I'm sure that is a good bid, but no one made 10 tricks. It should be a good exercise for all of you to figure out how to do it. The opponents will get The Ace of Diamonds and the King-Jack of Hearts, so how do you get the rest? 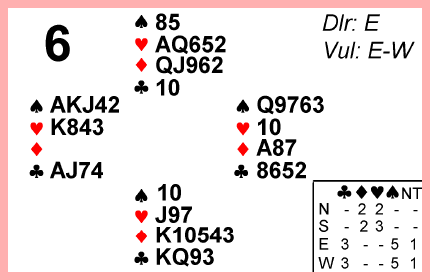 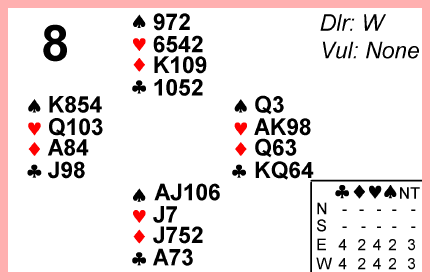 It floats to East who opens 1 No Trump with his balanced hand and 16 HCPs. South must pass and West stops to reevaluate and think. He sees 10 HCPs and considers just jumping to 3 No Trump. It's conceivable that partner could have a useless doubleton and lose the first 5 tricks. It costs him nothing to check for a Spade fit, so he responds 2 Clubs, Stayman. East responds 2 Hearts and West rebids 3 No Trump. Two pairs bid it and everyone made it. Good job! 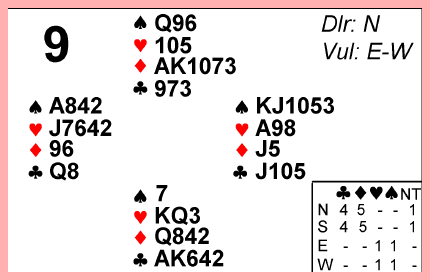 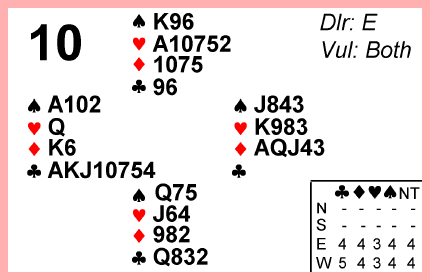 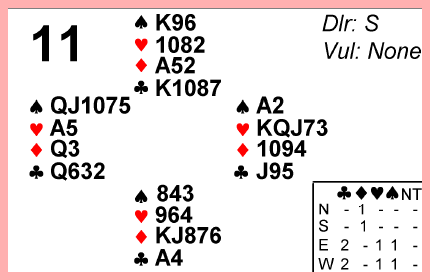 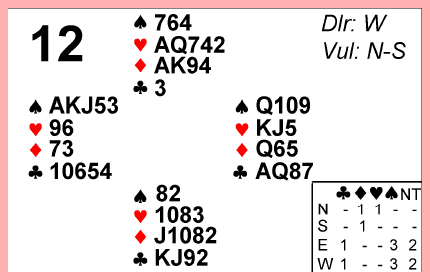 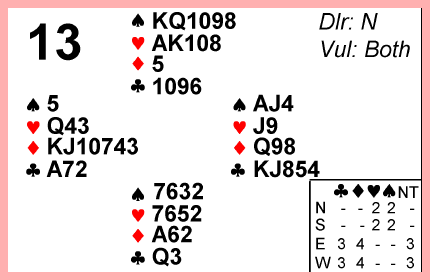 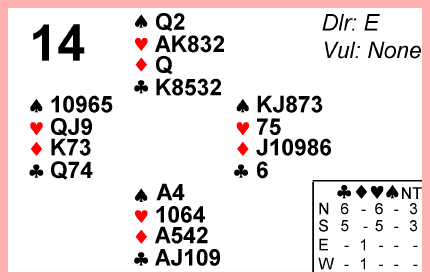 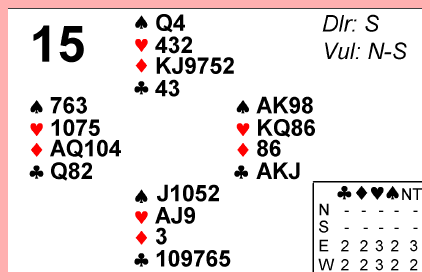 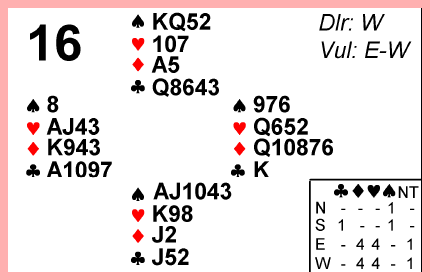 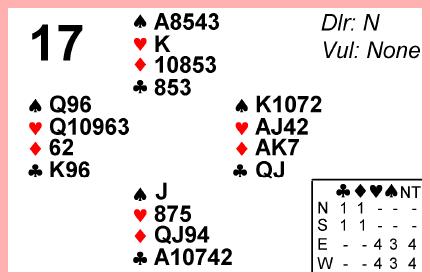 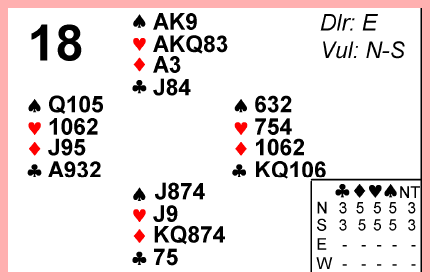