Nice day for air conditioners. Congratulations to John and Sally for a nice 60.39% for today's top. You've all done very well.

Next week we'll continue the No Trump Opening Bids worksheet. Be prepared. 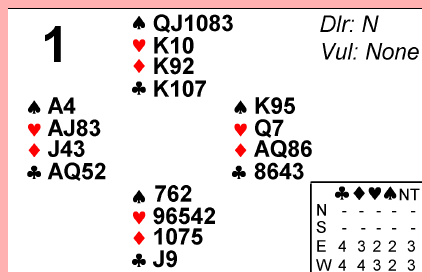 North may open 1 Spade with 12 HCPs plus 1 for the doubleton minus 1 for no Aces, but I prefer pass in first seat. Whether he does or not, West will overcall 1 No Trump and East will raise to 3 No Trump with his 10 HCPs. If North bid, it tells West where all the honors are to help make it.
Good bid, but no one made it. Try to figure out how. 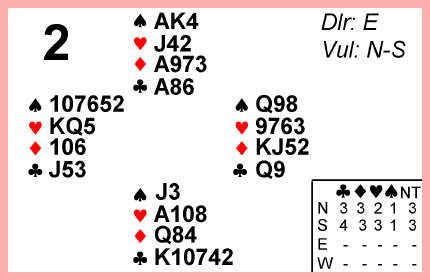 It floats around to North who opens 1 No Trump. South raises to game with his 10 HCPs and North must make it.
Good job, Kathy! 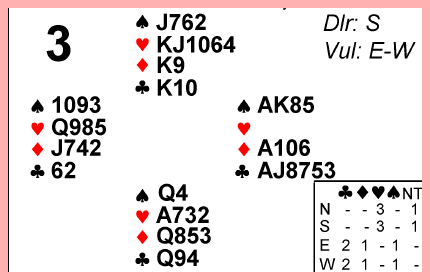 North may or may not open 1 Heart with 11 HCPs, 2 Doubletons and no Aces. Again, I would prefer pass in first seat. If he passes, East will open 1 Club, South and West will pass and North will overcall 1 Heart in fourth seat. East will pass and South will reevaluate to 11 points and invite with 2 Hearts. North lacks the 15 points to accept the invitation to game and passes. North should make 2 or 3 Hearts, for the top. 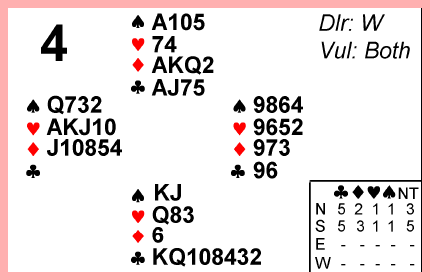 West may or may not open 1 Diamond, but the opponents will soon take over either way. If he passes, North will open 1 Diamond, East will pass and South will respond 2 Clubs to show 5 or more Clubs and 10 or more points. North will raise to 4 Clubs to show his support and 17 or more points or may just raise to game with his 19 points. South will reevaluate to 18 points and will go to game if necessary. He will also ponder slam (especially in partner went straight to game), but has no Aces and no way to ask partner. He will settle for game.
If West instead opens 1 Diamond, North will double (Big), East will pass and South will advance 2 Diamonds (Cue bid) to force to game and ask partner to bid his suits. North will bid 2 Clubs and South will raise to 5 Clubs. 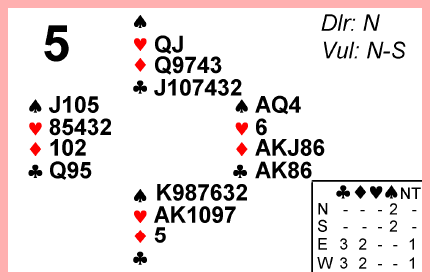 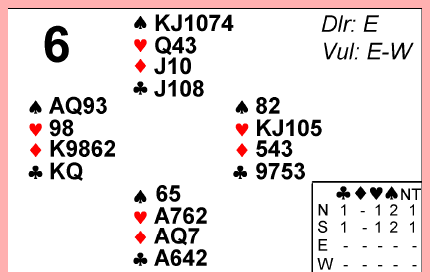 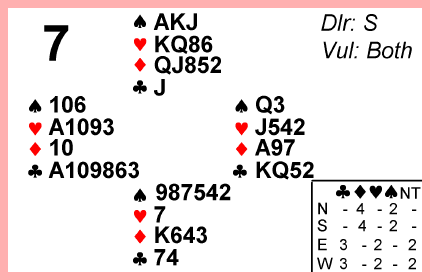 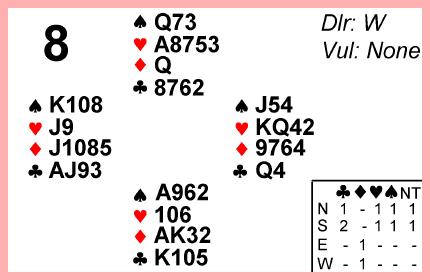 It floats to South who opens 1 Diamond. North replies 1 Heart and South rebids 1 Spade. North doesn't want to show preference for either of partner's suits. He can't rebid 2 Hearts, so his only alternative is 1 No Trump. South passes and declarer makes it for a good score. Jane risks the 4-3 fit with 2 Spades which should go down, but Bill makes it for the top. Bad bid, good play. 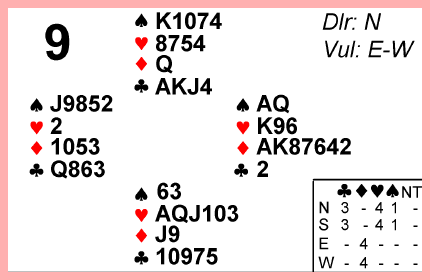 North opens 1 Club with his three suits, 13 points and 3 prime honors. East doubles (Big) and South responds 1 Heart. West passes and North raises to 2 Hearts. West could have nothing, but East likes his hand and competes to 3 Diamonds showing 17 or more for the big double. South reevaluates to 10 points and raises to 3 Hearts.
Alan somehow got to 4 Hearts and made it for the top. Good bid, good play. 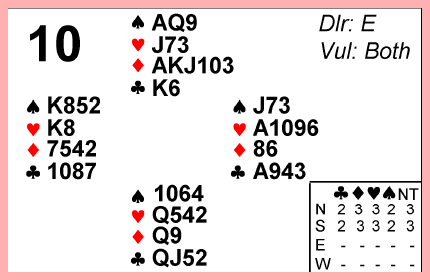 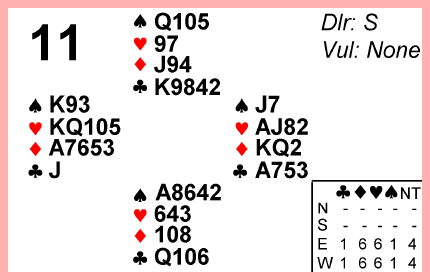 West opens 1 Diamond and East must show his 4-card major with 1 heart. West is forced to describe his hand and rebids 2 Hearts to show the fit and 13-16 points. East stops to think. If West has 16 points opposite his 15, they're close to slam. That's a big if, though, and he could lose the first 2 Spade tricks. He settles for 4 Hearts and the overtricks give him a good score without the risk. 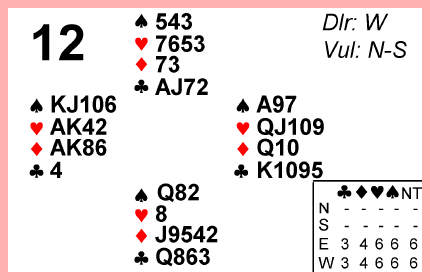 West opens 1 diamond with his 20 points and 3 suits. North passes and East bids 1 Heart up the line with his 12 HCPs and 2 suits. South passes and it's back to West to describe his hand. He is reasonably sure of  game in Hearts and there is a chance for slam. He wants more information, but doesn't want to bid anything partner could pass short of game. He doesn't see anything that isn't complicated or risky, so decides to settle for the game and just bid 4 Hearts. 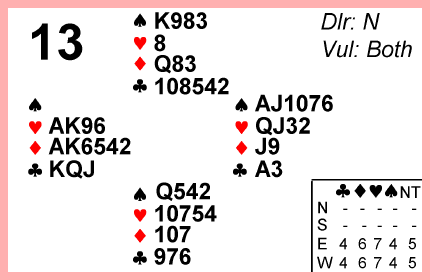 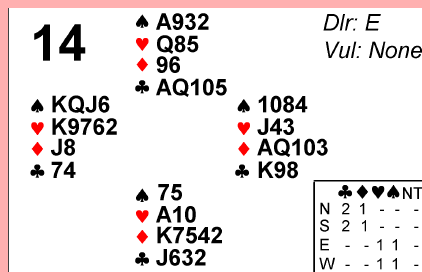 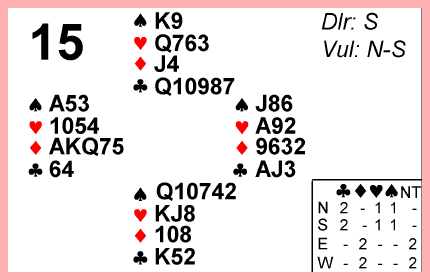 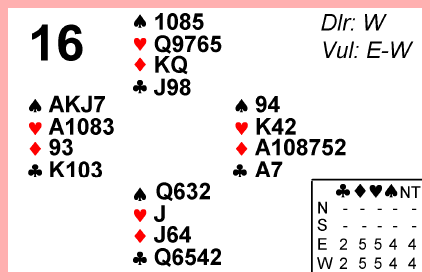 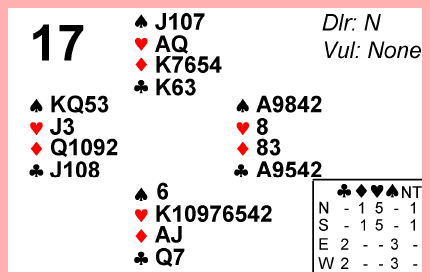 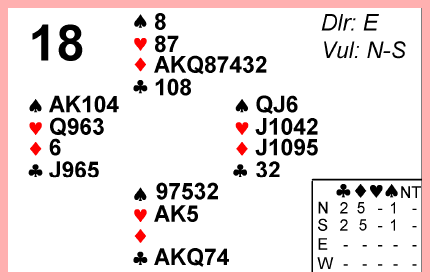