A really nice day. Not too hot, not too wet, not too cold. Congratulation to Wynne and Joe for a hot 66.18 %. You've all done very well.

I hope to see you next week. 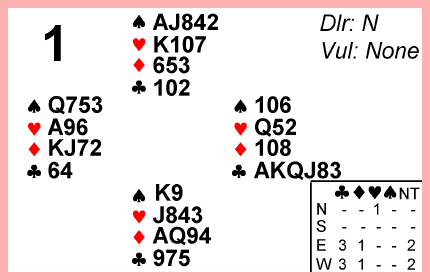 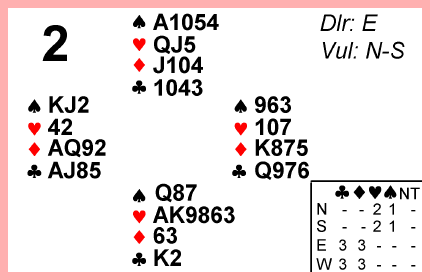 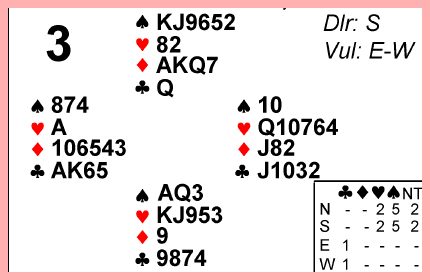 South passes, West probably passes but may open 1 Diamond. North bids 1 Spade either way and East passes. South is too strong for 2 Spades and needs 4-card support to bid 3 Spades, so responds 2 hearts promising 10 or more points and a 5-card Suit. West passes and North rebids 2 Spades promising 13-16 points and a 6-card suit. South knows that his Spade support makes partner stronger so raises to 4 Spades. Can we make the 10 tricks?
Let's suppose East leads the Jack of Diamonds (especially if West bid them). The dummy comes down and North stops to count and plan. He sees the 9 sure tricks: six in Spades and three in Diamonds. There might be a trick in Hearts, but he would rather leaving them for the defenders to lead. He can't see a Club trick, but he should be able to ruff the 7 of Diamonds.
He wins with the Ace of Diamonds in his hand ad cashes two trumps, low to dummy's Ace and low to the King in hand. He had hoped for the trump split, but East shows out on the second Spade. He leaves the third trump out and leads the 7 of Diamonds to ruff with the high Queen, He now hopes to get back to his hand to draw the last trump with 10 sure tricks and a chance for a Heart for an overtrick. He leads the 9 of Clubs and West takes the Ace.
Operation accomplished. Now what? West holds a death grip on his Ace of Hearts and leads a low Club which declarer ruffs. Now he draws the last outstanding trump, cashes the King and Queen of Diamonds and leads a Heart. East isn't sure where the Ace and King are but figures partner must have something, especially if he opened. He plays second hand low smoothly, hoping to set up a trick for partner. Declarer must guess whether to play the King or the Jack and will get the overtrick or not accordingly. 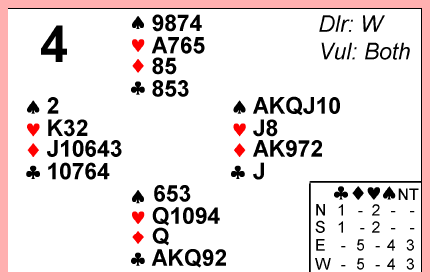 West passes as does North. East opens 1 Spade and South stops to ponder whether to overcall or pass. He would prefer to have a 6-card suit for an overcall at the 2 level, but squeezes out 2 Clubs. West and North pass again and East jumps to 3 Diamonds to show his two suits and 19 points. South passes and West reevaluates to around 10 points in support of diamonds. He raises to 5 Diamonds and it makes for a top. South now wishes he had let sleeping dogs lie. 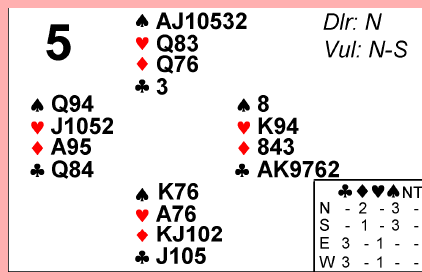 North's hand is not suitable for a vulnerable weak-two bid, so he must pass. East is not vulnerable, but 2 Clubs is strong so he squeezes out 1 Club with his 12 points, good 6-card suit and three prime honors. South passes and West responds 1 Heart, forcing partner to describe his hand. North passes and East rebids 2 Clubs. All pass and it makes with an overtrick for a decent score. East passes and South opens 1 Club with his 18 HCPs, intending to rebid 2 No Trump depending on partner's response. West passes and North considers responding 2 Clubs or 1 No Trump. Both bids deny a 4-card major, promise minimum points are not forcing. Since partner may have a 3-card Club suit, he chooses 1 No Trump. South invites with 2 No Trump and North raises to game with his 9 points.
East will save his Aces and probably lead the 7 of Clubs through South's Club bid. Declarer stops to count and plan. He sees 7 top tricks: 4 Clubs and 3 Hearts plus he can set up the Queen of Spades. It will be hard for West to get in and sooner or later East will have to lead from an Ace to set up another trick. It will make the game for the top. 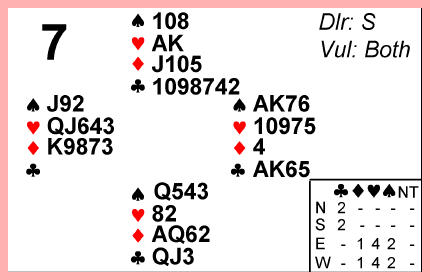 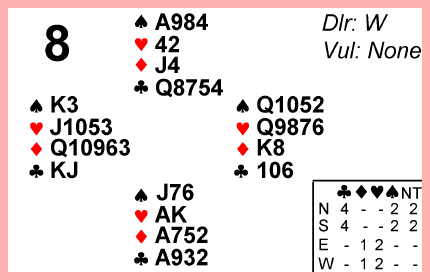 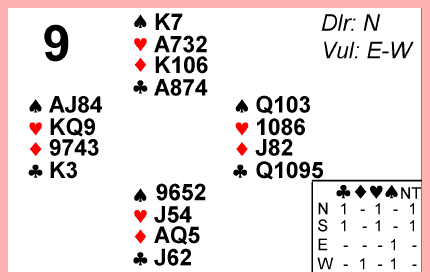 North opens 1 Club and South must respond 1 Spade. North lacks the 17 points to reverse to 2 Hearts, so must rebid 1 No Trump. South must pass and declarer makes it for the top. A simple board, but three different results. It scored the same as making a slam. 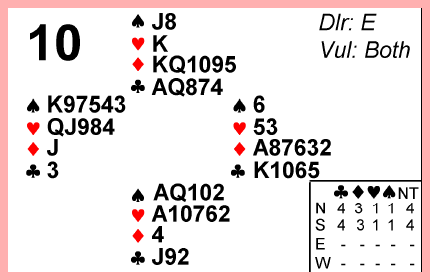 East passes and South opens 1 Heart with his 5-card suit, 11 HCPs and 2 points for the singleton. West passes and North responds 1 Diamond with his 5-card suit and 15 HCPs, forcing partner to describe his hand. South lacks the 15 points to reverse to 2 Spades, so rebids 2 No Trump. North rebids 3 Clubs to force partner again and South rebids 3 No Trump. Now he has to make it.
West leads the 5 of Spades (fourth highest) and Declarer stops to count and plan. He applies the Rule of Eleven and knows that there are only 6 Spades higher than the 5 outside of West's hand. He can see 5 of them in his hand and dummy, so knows RHO has only 1. He now sees 6 sure tricks: 3 Spades, 2 Hearts and 1 Club. He can set up at least 1 Club and at least 1 Diamond. He decides to take the first Spade trick, force the King of Spades and then attack the diamonds.
Declarer plays the 8 of Spades from dummy over East's 5. West plays the 6 which declarer infers is a singleton. He takes the 10 and leads the 2 toward dummy. West wins the King and continues with another Spade. South wins with his Queen and leads the 4 of Diamonds to West's Jack, dummy's King and East's Ace. West doesn't want to lead a Diamond or a Club toward Dummy's tenaces, so leads the 5 of Hearts. Declarer and West play low and dummy's King wins. Declarer cashes dummy's Queen, 10, 9 of Diamonds throwing his Heart losers and then leads the 8 of Clubs toward his hand. East covers with the 10 and declarer covers with the Jack which holds. Declarer then runs the 9 to West who can take his King or not, but declarer gets the rest for the overtrick and the top. 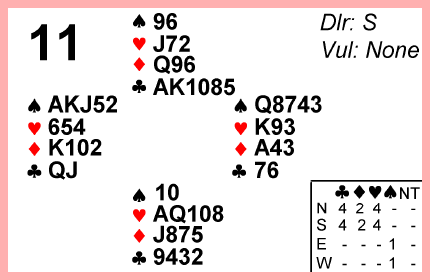 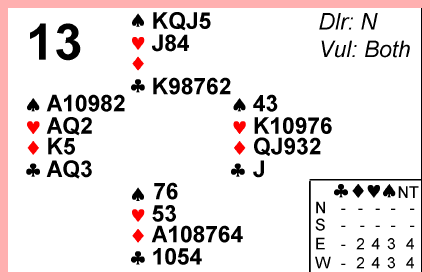 North counts 10 HCPs plus 3 for the void less 1 for no Aces and decides to pass. A good decision for if he opened 1 Club, partner would respond 1 Diamond and the bottom would drop out. East and South also pass and West stops to count and think. He sees 19 HCPs and opens 1 Spade, intending to rebid  No Trump if nothing better turns up. North passes again and East lacks the 10 points to respond in a new suit at the 2 level and must respond 1 No Trump. West raises to 3 No Trump and it makes with an overtrick for the top. 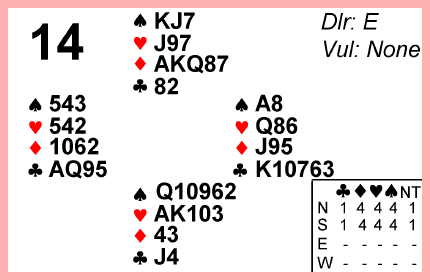 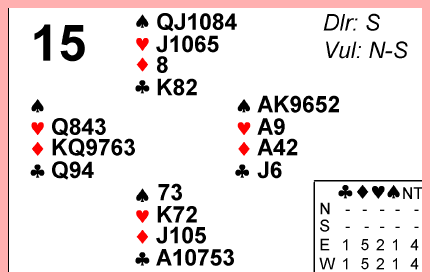 The bidding on this hand suffered because we haven't had lesson 6 yet. Some players got off on the wrong foot with a weak two Diamonds and it was hard to get back in step. We will learn that you don't use weak-twos with a 4-card major side suit or a void. West must pass or squeeze out 1 Diamond with his 12 points and 6-card suit. Let's suppose he does the latter. North will pass and East will respond 1 Spade with his 6-card suit and 17 points. South will pass and West will downgrade since he can't take short points for partner's suit until he's sure they're not going to end up in Spades. He rebids 2 Diamonds and now East stops to think.
East has a good fit with West's Diamonds, but would prefer Spades if partner can support him. He rebids 3 Spades to show his 6-card suit and 17 points. West really doesn't like the Spades, but partner may have 7 or 8 and will persist. He bids 4 Diamonds to again show his 6-card suit and lack of support for Spades. Now it's up to East. East wants to be in game and likes his Spades, but gets the message. He has adequate support for Diamonds and raises to 5 Diamonds. West makes it for a good result.
Let's now suppose that West instead passes. North will pass and East will open 1 Spade. West can't take the short points in partner's suit and must respond 1 No Trump. East stops to reevaluate and think. He sees 17 points with his 6-card suit, so rebids 3 Spades.
West still doesn't want to support partner's suit, but must do something with his 9 HCPs. He rebids 3 No Trump and leaves it up to partner whether to pass or bid 4 Spades. East gets the message that partner can't support Spades and passes. Declarer makes it with an overtrick for an even better result. 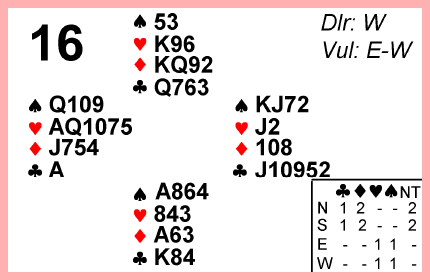 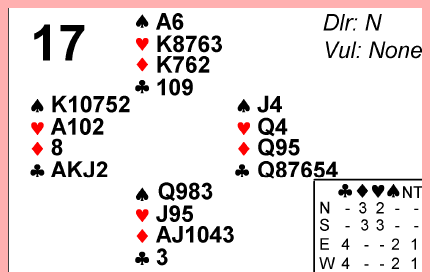 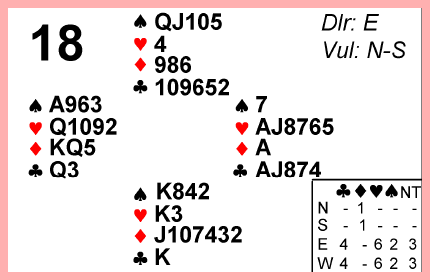