A really hot day, but the air conditioning was nice for bridge. Congratulations to Jane and Herb for a nice 62.5% for the top. You've all done very well.

We'll start transfers next week. It's really cool so try not to miss it. If you can't come, be sure to study the lesson and contact me if you need help.

I hope to see you. 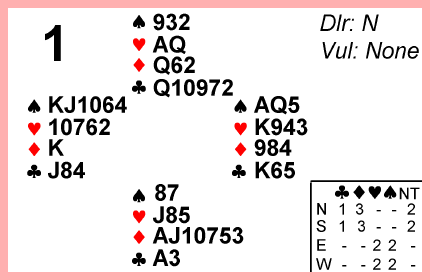 North passes with his 10 points as does East with his 11. In third seat, South's hand is too good to let go. He has 12 points and a 6-card suit and I think that he should open 1 Diamond. West will pass and North will respond 2 Clubs to show his 10 points and 5-card suit. East will pass and South will rebid 2 Diamonds to show his 6-card suit. It should make for a good score. If East or West belatedly get into the auction at 2 Spades, South will pass because he's shown everything that he has, but North will raise to  Diamonds knowing that his support makes partner stronger by at least 3 points. They should make that for the top as well. 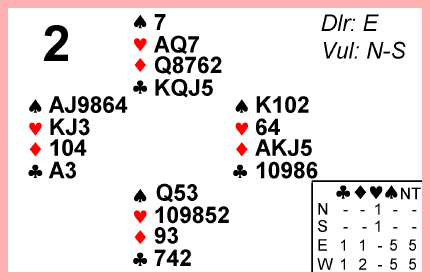 East passes with his flat 12 points, South passes and West opens 1 Spade with his 15 points and 6-card suit. North doubles with his 16 points and East redoubles. South knows that they can't let the redouble stand and since he clearly prefers Hearts to either minor, advances 2 Hearts. West rebids 2 Spades to show his 6-card suit and 13-16 points. North knows that his partner may have nothing for his advance, so will probably pass. East doesn't really care what North does because he  has 12 points and knows that his support for Spades give partner at least 16 points. He goes straight to game and makes an overtrick.
At the other table, South passes partner's takeout double for a disaster. Oh my! At least after we finish lesson 4, they'll never do that again. 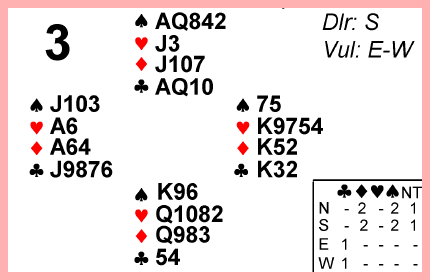 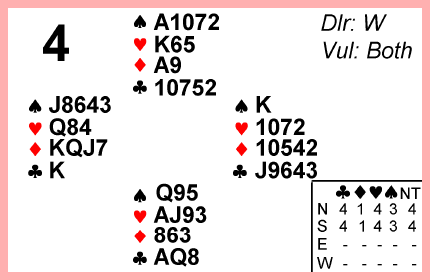 It floats to South who opens 1 Club with her 13 points. North responds 1 Spade and South must rebid 1 No Trump since she lacks the 17 points to reverse to 2 Hearts. North invites with 2 No Trump with his 11 HCPs and South passes with her minimum. It makes but they aren't rewarded because of a windfall at the other table.
At the other table North either opened 1 Spade (bad) or overcalled 1 Spade (worse) and paid the price by giving their opponents an unearned top. 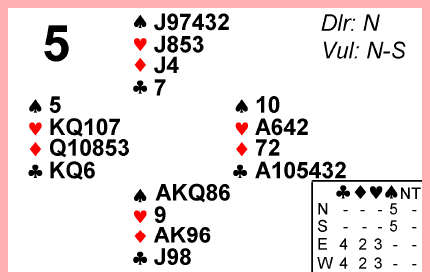 North and East pass and South opens 1 Spade. West doubles for takeout and North stops to reevaluate and think. She now sees around 8 points and jumps to 3 Spades to show her great trump support, but less than 10 points. (With 10 points she would redouble). East passes and South stops to reevaluate and think. He now sees a good fit and 20 points, so raises to game. It makes with an overtrick for the top. 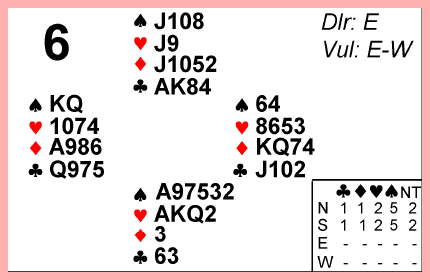 Good job at both tables! 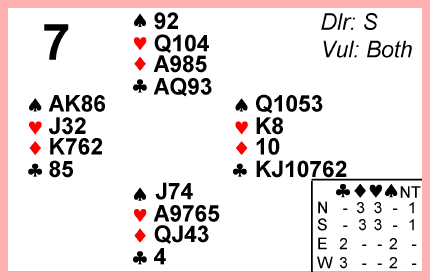 Good bidding at both tables. Good play by Herb! 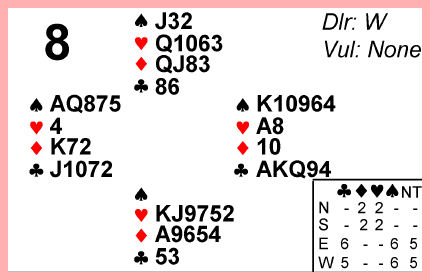 Good at both tables, but could they bid the slam?
West is close to opening, but let's suppose he passes. East opens 1 Spade and South ponders 2 or 3 Hearts to interfere. He's a little weak for 2 and 3 might infer more Hearts, so let's suppose he passes. West stops to reevaluate and think. He now counts around 15 points and is sure of game. If partner has extra values, there might be a slam. He wants more information before he decides, so responds 2 Clubs to force partner to describe his hand.
East sees a good fit in Clubs and reevaluates to around 20 points opposite partner's 10 or more. He doesn't want to bid anything short of game that partner could pass. He has no forcing bid except Blackwood. If partner has no Aces that clearly tells him to pass 5 Clubs. If partner has one Ace, though, his 5 Diamond response forces him to slam whether partner has extra strength or not. He decides to bid 5 Diamonds and leave it to partner to go to slam with extra strength.
West stops to think. They have a double fit which is always good.  Partner must have 18-20 points to go to 5 Clubs when he only promised 10 or more. He's sure of at least 33 points and since there's no way to know about the Aces, just goes to 6 Spades.
It's certainly possible to bid, but a little beyond us at this stage of the course. Still a good job to bid the slam and make the overtricks. 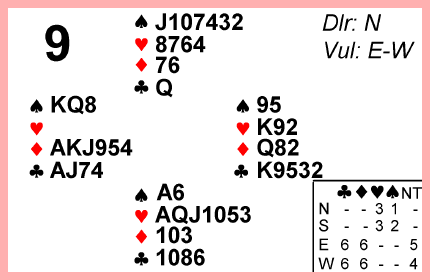 Ugh! How should this go?
North and East pass and South opens 1 Heart. West doubles (Big) and North may or may not squeeze out a raise to 2 Hearts by reevaluating to about 5 points. East evaluates to 9 points and jumps to 4 Clubs. South reevaluates to 16 points with partner's support, but will probably pass. West will reevaluate to 24 points opposite partner's 8 or more. He will certainly raise to  Clubs, if not 6.
I have no idea how North could get to 4 Spades. 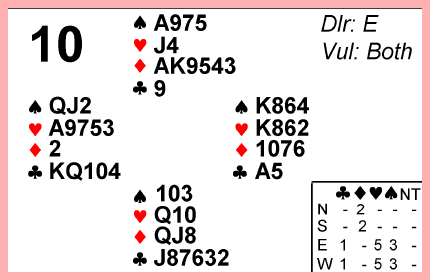 Good bid at both tables. You get the overtrick by taking the Club finesse to the Jack. It's risk-free because the most you can lose is 3 tricks whether it works or not. Easy pickings for the top. 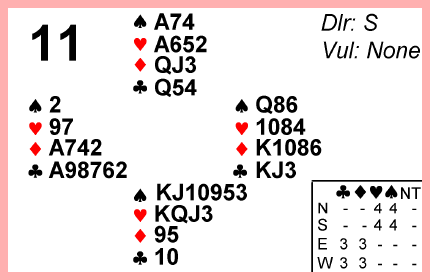 South will open 1 Spade with his 6-card suit and 13 points. North will stop to reevaluate and think. He sees a Spade fit and with his 12 points is reasonably sure of game. He does know if partner has enough for slam, so wants more information before he sets the contract. He has no regular forcing bid and doesn't want to lie with 2 Hearts, so makes use of a tactical bid of 2 Clubs. He's not concerned about promising a 4-card suit because he can always bring partner back to Spades.
South rebids 2 Spades to show his 6-card suit and 13-16 points. North knows that his Spade support gives partner at least 16 points, but slam is unlikely. He raises to 4 Spades. This is a great bid if he can make it. When the dummy comes down declarer see that he has 3 sure losers and must guess the Queen of Spades.
Let suppose the defenders take the Ace and King of Diamonds and the Ace of Clubs and declarer ruffs the King of Clubs. There has been nothing from the bidding or play to suggest how to play for the Queen, so he considers the odds. At the start, the odds are about 41 % that the outstanding Spades are 2-2 plus 30% they are uneven but in the East hand. That looks good, but he decides to cash the Ace to see if they both follow. They do, so now the odds are about 52 % that they are 1-1 plus 24 % they are uneven but in the East hand. That's better yet, so he leads low and when East follows low, puts up the King. He goes down.
You must bid 4 Spades with this hand. You go down, but that's the breaks. Again, you must decide whether you'd rather bid game and go down or bid a part score and make game. It's hard to win if you consistently play for the latter. 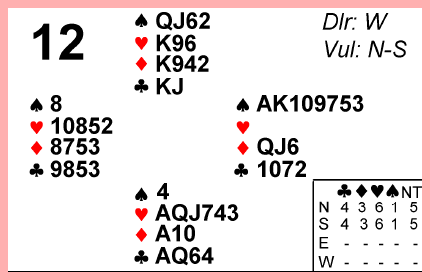 This looks like a replay of board 11, but this time you have 12 tricks laydown and have to work to go down. Fortune favors the bold. 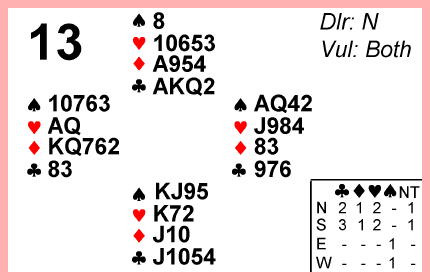 North must open 1 Diamond and South must respond 1 Spade. North can choose between rebidding 1 No Trump and 2 Clubs, but, with no major fit and a minimum, 1 No Trump is preferred. Regardless of which he chooses, South has no business inviting game by raising. 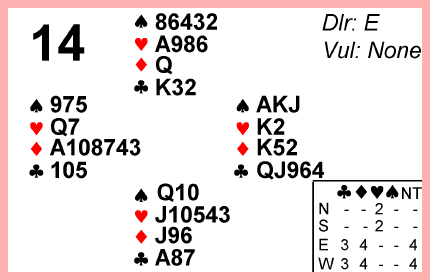 East opens 1 No Trump with his balanced hand and 17 HCPs. West has to decide whether partner would be better off in 1 No Trump or 3 Diamonds. If he chooses the latter, he will respond 2 Spades, partner will bid 3 Clubs as directed, West will correct to 3 Diamonds and East will pass as directed. In this case either should make for a good score.
There is no way to get to 2 Diamonds or 2 No Trump. Next weeks lesson will be just in time to prevent the recurrence of either. 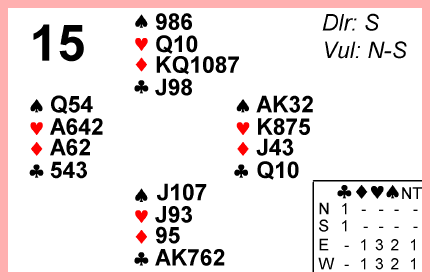 It floats to East who opens 1 Diamond. West must respond 1 Heart and East is forced to describe by raising to 2 Hearts to show the fit with 13-16 points. West must pass with his 10 points and it should make with an overtrick. Declarer should get 4 Spade tricks, 3 Hearts, 1 Diamond and a Club or Diamond ruff. 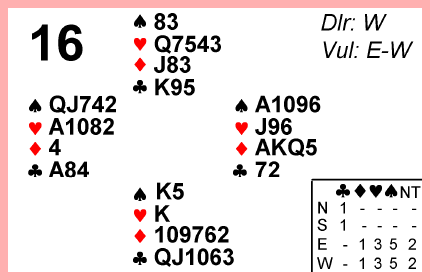 West opens 1 Spade and East sees a good fit and is reasonably sure of game with his 16 points opposite partner's 13 or more. East isn't sure about slam and desires more information from partner. He can't bid anything that West can pass short of game, so responds 2 Diamonds to force partner to describe his hand. West rebids 2 Hearts to show his two suits and 13-18 points (He didn't jump-shift). Since partner could still have a minimum, East gives up on the slam and just bids 4 Spades. It makes for a top.
It they knew that East/West at the other table were going to self-destruct, they wouldn't have bothered. They couldn't know, however, and had to bid what they could make. 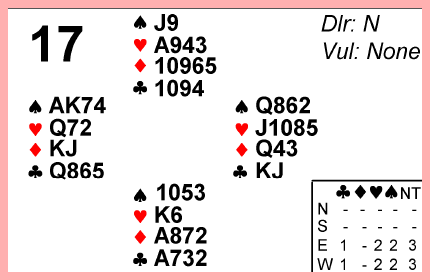 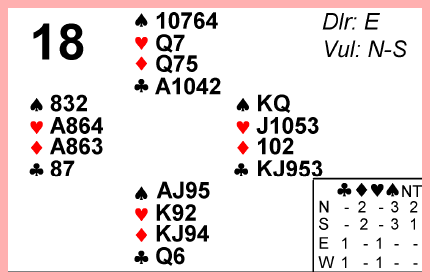