Congratulations to Herb and Ellen for a hot 71.43% for today's top. You've all done very well.

Next week we'll start Responses to No Trump openings. Getting into the good stuff now.

I hope to see you all. Bring your friends. 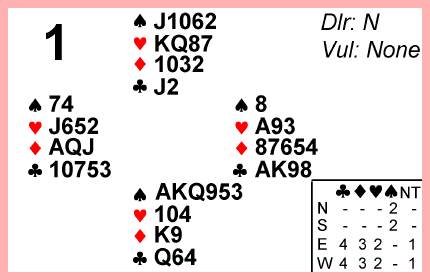 North passes and East opens 1 Diamond with 11 HCPs and the singleton (a little thin, but bolstered with 3 prime honors and no Quacks). North overcalls 1 Spade with 14 HCPs, plus 2 for the  doubletons and a 6-card suit. West competes with 2 Diamonds and North competes with 2 Spades. East passes and South stops to reevaluate and think. He adds 3 points for partner's support of his suit for a total of 19 and figures partner for around 6 points, so he raises to 4 Spades.
I still like the bid, but couldn't make it. C'est la vie say the old folks. It goes to show you never can tell. 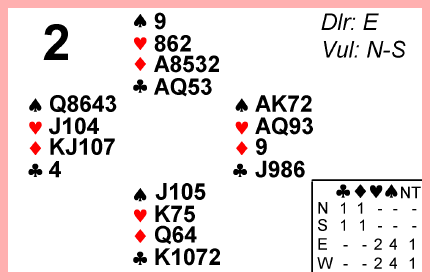 East opens 1 Club with 14 HCPs and a singleton. South passes and West responds 1 Spade. North passes and East reevaluates to 18 points with the fit, adding 1 for his 4-card support and an extra 1 for the singleton. West could have made his bid with 6 points and a 4-card suit, so East invites with 3 Spades promising 17 or more and at least 4 Spades. West now counts 10 points and raises to game.
Ellen was able to make it for the top. Good job! 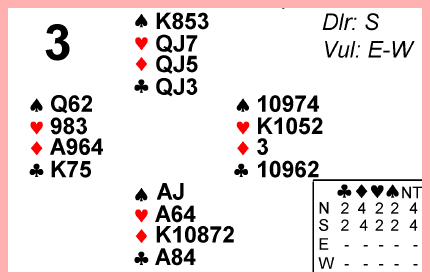 South opens 1 No Trump with a balanced hand and 16 HCPs. West passes and North goes to 3 No Trump with his 12 HCPs. Declarer makes an overtrick for the top.
Martha invited game with 2 No Trump promising 8-9 HCPs and I chose to pass with my 16. We would have  gotten the bottom anyway, because I failed to find the tenth trick. Share the glory, share the blame! 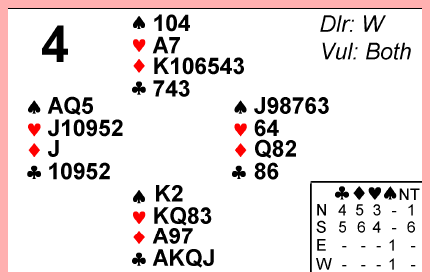 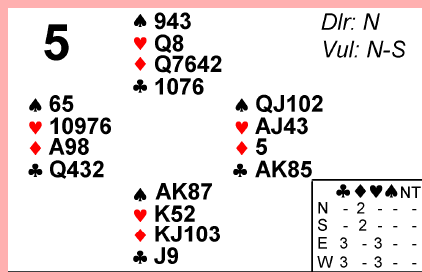 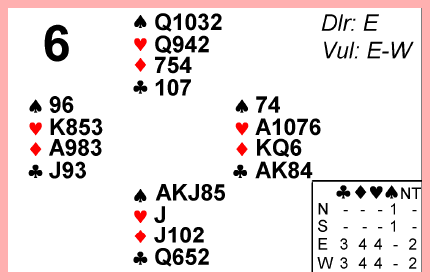 East East opens 1 No Trump with a balanced hand and 16 HCPs. South passes and West responds 2 Clubs, Stayman, with 4 Hearts and 8 HCPs. East rebids 2 Hearts and West invites with 3 Hearts showing 8- points and the fit. East reevaluates to 17 points and goes to game. It should make for the top.
Apparently South overcalled 2 Spades with a 5-card suit and a lot of Quacks. I think an overcall over a No-Trump opening should be a 6-card suit and at least as strong as 1 No Trump. This bid was asking for trouble and they found it. I have no idea how Debbie bid one Spade. Did East pass or open 1 Club? This lesson is just in time! 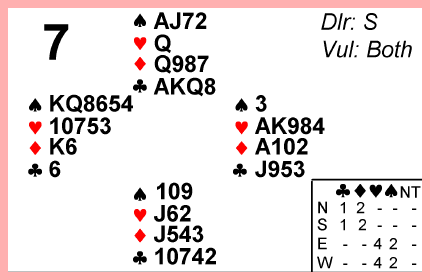 South passes and West doesn't qualify for a weak 2 Spades (See Lesson 6). North opens 1 Diamond or 1 Club (with enough to reverse if necessary). East overcalls 1 Heart, South passes and West stops to reevaluate and think. He counts around 13 points in support of Hearts and knows his support makes East stronger. Two Hearts would be invitational, but he wants to show extra and bids 3 Hearts. North will pass and East will raise to 4 Hearts.
This is a great bid with a 9-card fit and a total of 28 points. Neither East made 4 Hearts, but that doesn't make it bad. Stuff happens. 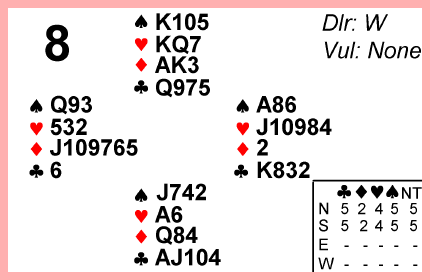 Wow! What happened here? West passes and North opens 1 No Trump with a balanced hand and 17 HCPs. East passes and South has enough for game with 12 HCPs. He has a 4-card Spade suit so can bid 2 Clubs (Stayman) or just go to 3 No Trump. It costs nothing to check the Spades, so he responds 2 Clubs. North rebids 2 Diamonds to deny a 4-card major and South goes to 3 No Trump which makes with overtricks for a good score.
I have no idea how poor Jane got to 4 Spades. Maybe they got Clubs mixed in with Spades. Oh well. On to the next one. 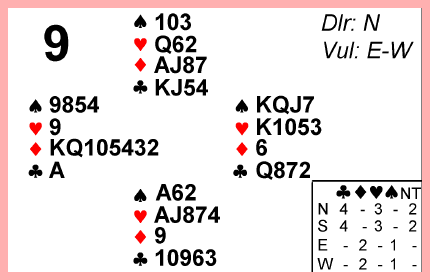 This hand is a wicked trap. North passes and East stops to think. He has 11 HCPs, three 4-card suits and a singleton, He has no Aces and 3 Quacks. He should decide to pass. South will pass and West stops to think. He counts 9 HCPs plus 4 for the singletons with a 7-card Diamond suit. He opens 1 Diamond. North will pass and East responds 1 Heart.
South passes again and West rebids 2 Diamonds. All pass and it makes for a good score. That would be nice, but....
East, however, can't resist opening 1 Club and enters the trap. West must reevaluate to only 11 points and must respond 1 Diamond. East is forced and bids 1 Heart up the line. West now sees only 9 points. He doesn't like either of opener's suits and ponders 2 Diamonds, but is reluctant to deny his 4-card major and bids 1 Spade. East is again forced and raises to 2 Spades. West now reevaluates back to 13 points and raises to  4 Spades.
The innocent-looking 1 Club opening has led to a disaster! The beginning of wisdom. 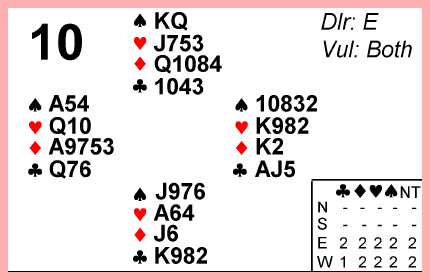 Martha passed with 12 points in first seat and I passed with what I thought was a poor 12 points in third seat. At the other table Debbie opened 1 Diamond, Harriet responded 1 Heart and Debbie rebid 1 No Trump. Harriet invited with her 11 HCPs and Debbie passed. I still like my bid, but the other pairs aggressive bidding got the top. More power to them. 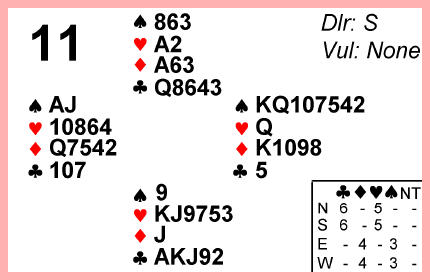 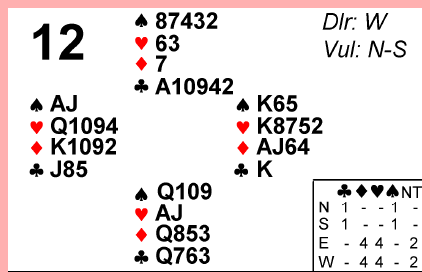 East counts 14 HCPs but the singleton King may be worth only 2 as a singleton rather than 3 as a King. She does have a 5-card major and 4 prime honors versus 1 Quack, so opens 1 Heart. South passes and West stops  to reevaluate and think. He now counts 11 HCPs plus 1 for the 4-card support. He knows that his support makes partner stronger by at least 1 point to 14. He doesn't want to risk East passing, so goes straight to 4 Hearts. Martha meets the challenge and even finds an overtrick. Good for her! 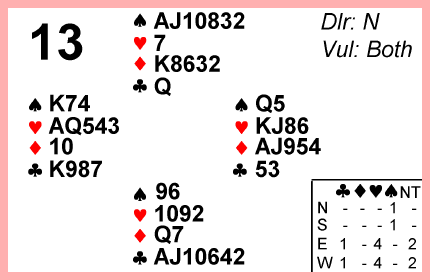 North's Spades do not qualify for a weak-two opening (See Lesson 6), so he passes. East counts 12 points and passes. South passes and West opens 1 Heart with his 5 Hearts and 14 points. North overcalls 1 Spade and East stops to think with his 4-card support and 13 points. He's reasonably sure of game, but he would like to know more about slam before he decides. He responds 2 Diamonds to force partner to describe his hand. West can't rebid his 5-card suit or reverse to 3 Clubs, so must rebid 2 No Trump.
East decides that slam is out of the question, so jumps to 4 Hearts with his 13 points opposite partner's 14 or more. It makes for a top.
It looks as if North at both tables opened 2 Spades. Although it did the job of keeping the opponents out of game, it's risky to make improper bids. It can lead to losing the trust of your partner and you'll never win like that -or even keep a partner. 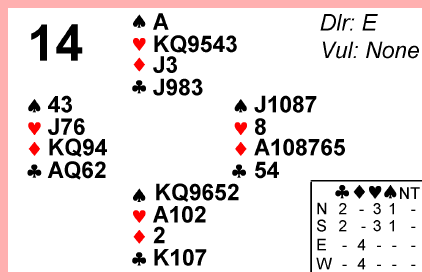 This is a frustrating hand. East must pass and South will open 1 Spade with his 6-card suit and 14 points. West must pass and North will respond 2 Hearts with his 6-card suit and 11 points. South is forced to describe his hand and he stops to reevaluate and think. He still has 14 points and knows that partner has 10 or more. He ponders rebidding his Spades, but decides that he must show support for partner's 5-card or longer major. He rebids 3 Hearts and North now stops to reevaluate and think. With partner's support, he now sees 11 HCPs plus 2 for the singleton and 3 for the fifth and sixth Heart. He can do no less than bid 4 Hearts.
East leads the Ace of Diamonds and North stops to count and plan. He sees dummies singleton Diamond and 12 likely tricks in the majors. He wonders if he missed slam. He follows to the Ace, but then in short order East leads a Club, West wins the Queen and Ace and returns the 4 for East to ruff. Down 1 before he even gets in and it's not over. East leads another Diamond and declarer must ruff in dummy. He had planned to unblock the Ace of Spades, draw trumps ending in dummy and throw any other losers on the Spades. That's out now with only two trumps left in dummy.
Declarer thinks hard and decides to lead to The Ace of Spades in hand, cash the King of Hearts and lead a low Heart to dummy's Ace. He wins dummies King of hearts and continues with the Queen. West can ruff or not, but declarer has the rest for down 1. Bridge is a cruel game! 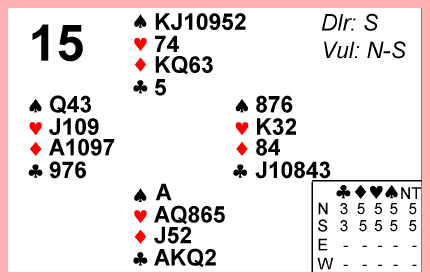 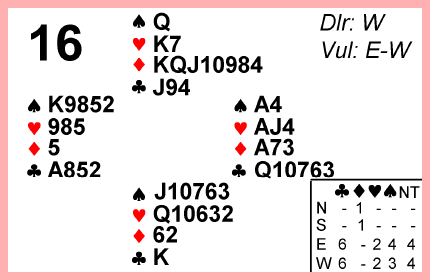 West passes and North opens 1 Diamond with 7 good Diamonds and 1 points. East overcalls 1 No Trump, South passes and West bids 2 Hearts to transfer to Spades. North passes, East bids 2 Spades as directed and West passes. North isn't ready to give up. He decides that his Diamonds are self-supporting, so adds 5 points for a total of 18. He bids 3 Diamonds and East passes because partner could have no points for his bid.
North makes it somehow. It doesn't matter because even with  two down doubled wouldn't match the other tables 600 for 3 No Trump vulnerable. Good job Harriet at one table and Jane at the other! Tough hand. 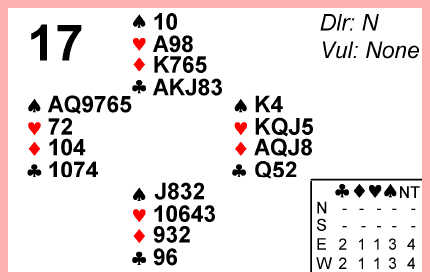 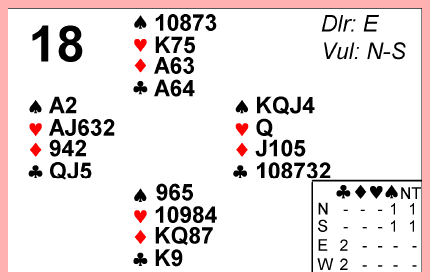