Congratulations to Wynne and Joe for a very nice 63.39% and today's top. You've all done very well.

Next week we'll try to finish the One-of-a-Suit-Opening-Bid Worksheet and clear the decks to start No-Trump Opening Bids.

I'll try to add some comments to today's boards. Check back here tomorrow to see what I've offered. 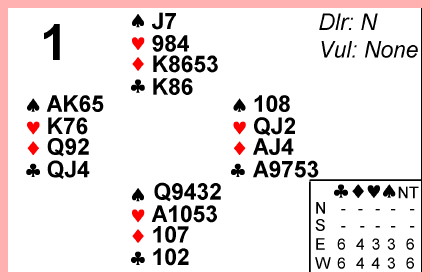 This hand can go two different ways, depending on East. She counts 12 HCPs plus 1 for the doubleton. She may open 1 Club because of the 5-card suit or may pass with the four Quacks. Let's suppose she opens. South passes and West counts 15 HCPs and considers 2 No Trump. That would deny his 4-card major however, so he must respond 1 Spade, forcing partner to describe his hand. East must rebid 1 No Trump and West will raise to 3 No Trump with his balanced hand and 15 HCPs. All the finesses work, so it can conceivably make 6 No Trump, but most players will play more conservatively to make the contract.
Let's suppose that East instead passes. South will pass and West will open 1 No Trump. East will probably fret about the lack of a Spade stopper, but will eventually bid 3 No Trump with his 12 HCPs. 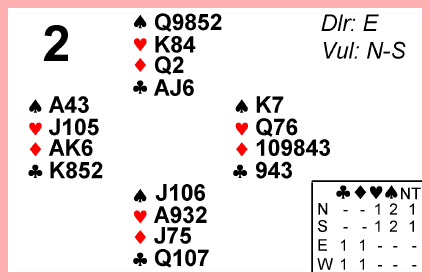 This board is a bit of a mystery. The results look like North opened 1 Spade and South passed or raised to 2 Spades, which makes for a decent score. If so, what happened to West? Why didn't she open 1 No Trump with her balanced hand and 15 HCPs. Did she open and North overcalled 2 Spades with 12 points and a 5-card suit? One North ended up in 1 Spade, so West must have passed.
Ugly board! 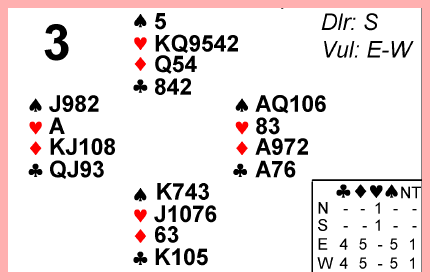 South passes and West opens 1 Diamond with his 12 HCPs plus 2 for the Heart singleton. North jumps to 2 Hearts with the favorable vulnerability, a weak jump overcall. East responds 2 Spades  with his 14 HCPs plus the doubleton in Hearts to force partner to describe. South considers competing with a preemptive 3 Hearts, but may pass. In either case, West reevaluates to 14-15 points and invites with 3 Spades. East raises to game and it makes for a good score.
A good preparation for Lesson 4. 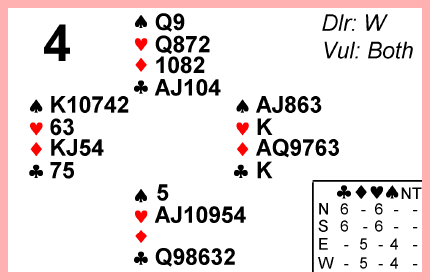 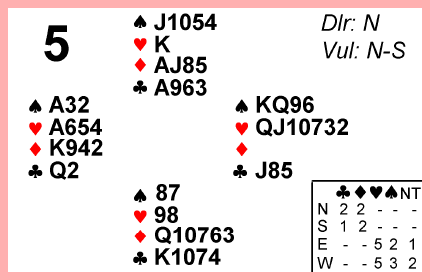 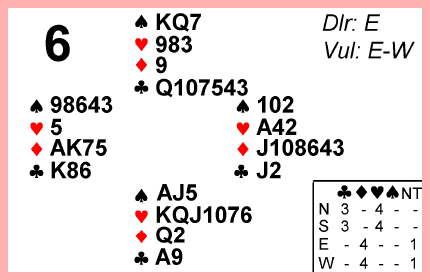 East passes and South counts 17 HCPs plus 1 for the Club doubleton and opens 1 Heart with her 6-card suit. West passes and North responds 2 Hearts with her 3-card support and 9 points. South reevaluates to 20 points and jumps to 4 Hearts. She makes it for the top and the others have the Reevaluation Blues. 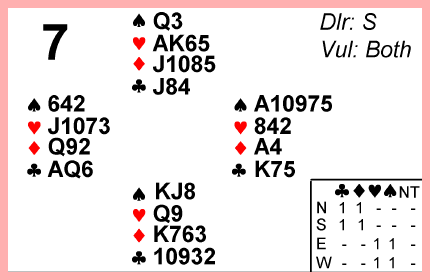 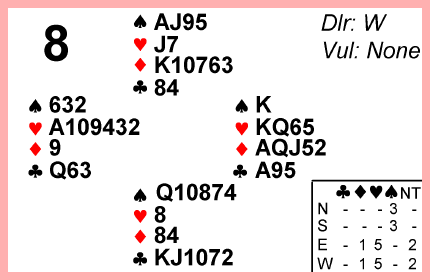 It floats to East who counts 19 HCPs, but must subtract 1 for the singleton King of Spades. She opens 1 Diamond and West must respond 1 Heart with his 6 points. East doesn't have quite enough to jump to game so invites with 3 Hearts. With the Heart fit West adds 3 points for the 6-card suit and 2 for the singleton Diamond. With a total of 11 points he has plenty to raise to 4 Hearts. It makes with an overtrick for the top. 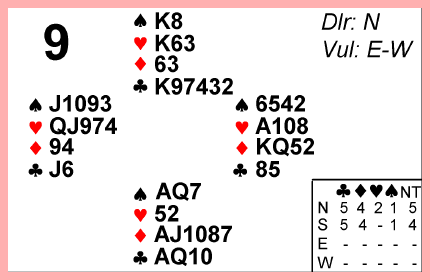 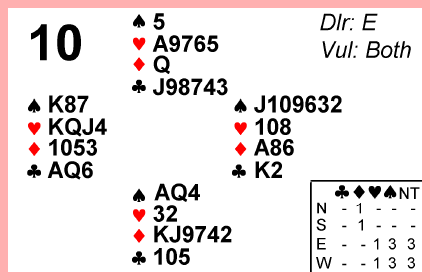 This board presents a good example of a judgment call. North opens 1 No Trump, East passes and South stops to think. South has only 3 HCPs, but can't just pass willy-nilly. He must stop to consider if partner is better off in 1 No Trump or 2 Hearts. His fear is that in No Trump, he might contribute nothing and declarer might have to make all plays from his hand. The average opening hand has about 3-5 tricks and they are likely to go down. In Hearts he probably will provide several tricks and declarer can then lead to his hand.
In this case, if South transfers to 2 hearts and then passes, they will make their contract. If he instead passes, they will go down. This is not always an easy decision, but it is your duty to make it one way or the other and you won't always be right. 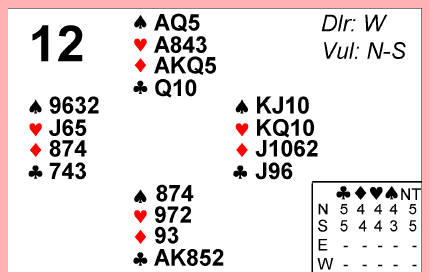 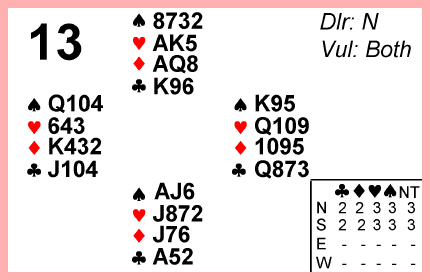 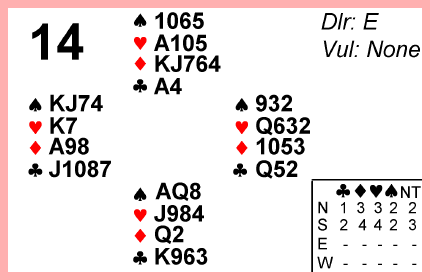 Tough board. East passes and the next 3 hands all have 12 HCPs. Who opens? Then what?
Let's suppose South opens 1 Club. West must pass and North responds 1 Diamond, forcing partner to describe. South must rebid 1 Heart to show the 4-card major and North must stop to think. He is interested in game with his 12-13 points, but has an awkward rebid. He can't rebid his 5-card suit unless he has no other bid. He is hesitant to raise Hearts in a probable 4-3 fit. He is hesitant to bid No Trump with no Spade stopper and wouldn't be sure whether to bid 1, 2 or 3 No Trump.
Fortunately everything works and it boils down to who can make their tricks. 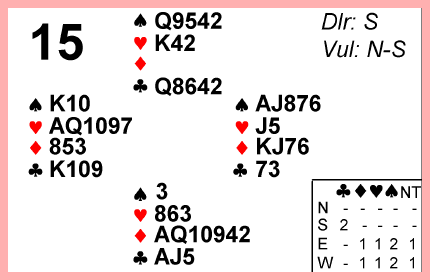 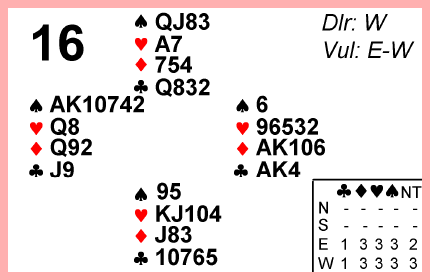 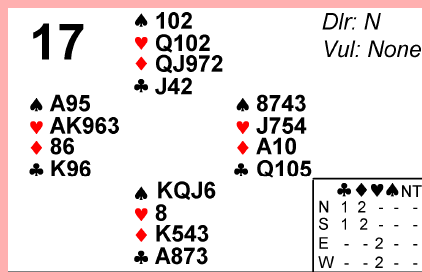 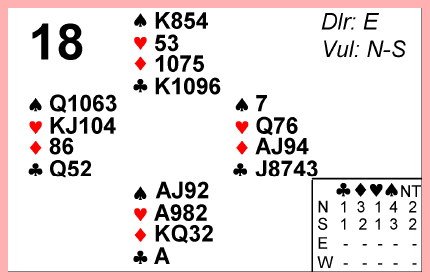