Congratulations to Bill and John for a nice 64.58% for today's top. You've all done very well.

Next week we'll start the one-of-a-suit opening worksheet. Be ready to discuss.

Be sure to review today's hands at nhbridge.club. I'll try to add some comments if I can. 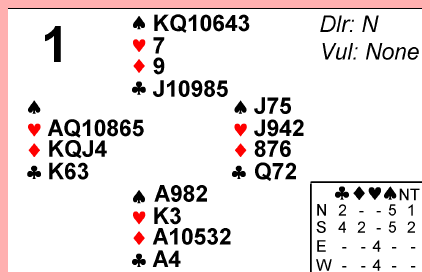 North opens 2 Spades, a weak-two bid, East passes and South stops to think. He is reasonably sure of 6 Spade tricks and his three Aces. That leaves him one short, but he figures he can ruff at least one of partners loser's in his hand. He jumps to 4 Spades. West stops to consider a sacrifice. If North can make his bid, West can go down two doubled and still come out ahead.
As it turns out, North will make his bid for 450 points and West would go down only one. It would be a good sacrifice, but no one bid it. Gerri and Kathy made a top when their opponents let them play at 3 Hearts.
Remember this one when we get to lesson 4! 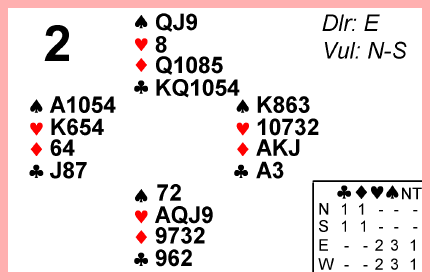 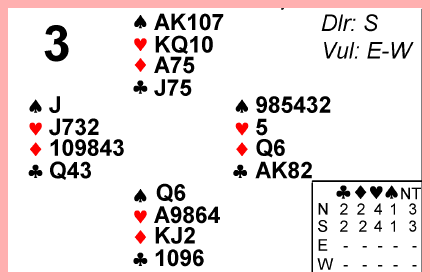 It floats to North who opens 1 No Trump with his balanced hand and 17 HCPs. East passes and South bids 2 Diamonds, the Jacoby Transfer, to force partner to rebid 2 Hearts. South then bids 3 No Trump to promise exactly 5 Hearts and allow partner to choose 3 No Trump or 4 hearts. West will probably lead the 10 of Diamonds and both should make easily. If West instead leads a low Club, declarer must play carefully to make 4 Hearts.
East will take the King of Clubs and return the 2 to West's Queen. West will then lead the 4 to East's Ace and East will lead he last Club in an attempt to set up a trump for West. Declarer must stop and think. He considers letting it ride to ruff or over-ruff in dummy, but rejects that when he realizes that West will also let it ride, causing him to use a trump from dummy. That would lose a trump if West holds J-x-x-x. He ruffs with the 9 and whether West over-ruffs or not, he can win the trick and be able to pick up the Jack of Hearts with careful play.
The 3 No-Trump contract is easier. He can lose 4 Clubs and still make it with careful play. Fortunately for declarer, East is end-played after the fourth Club and must give up a trick whatever he leads. 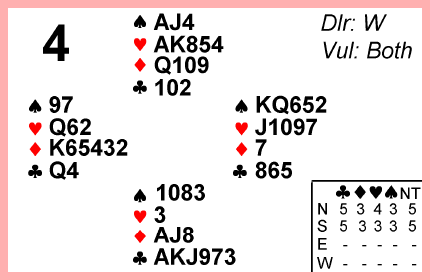 Surprisingly, no one got to game here. North opens 1 heart with his 5-card major, 14 HCPs plus 1 for the doubleton. East passes and South stops to reevaluate and think. He counts 13 HCPs, but can't take points for the singleton until he knows that they're not going to be in Hearts. He wants to be in game, but needs to find a fit. He responds 2 Clubs to show his 10 or more points and force partner to describe his hand. North rebids 2 No Trump showing 13-16 points and a willingness to play in No Trump. South considers rebidding Clubs, but partner could pass and he'd rather be in 3 No Trump anyway. He just bids it and it makes with overtricks for the top. 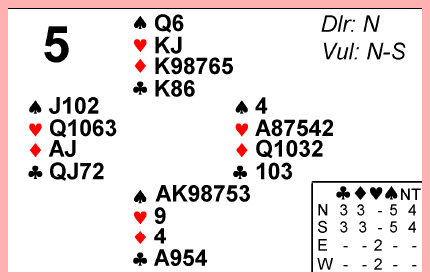 North passes with 12 HCPs and no Aces, East passes and South opens 1 Spade with 11 HCPs and two singletons. West must pass and North responds 2 Diamonds to show his 10 or more points and to force partner to describe his hand.
South stops to reevaluate his hand and think. He still counts only 16 points and can't jump to 3 Spades. He considers treating his 7-card suit as self-supporting and just going to 4 Spades, but if partner has no support and only 10 points, it might be awkward. He rebids 2 Spades, hoping partner has support and raises to game. North has adequate Spade support and knows it makes partner stronger. Whether he just bids the game or invites with 3 Spades, they should get to game. 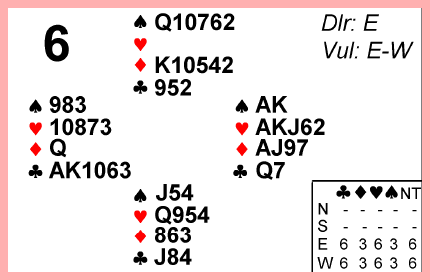 East counts 22 HCPs plus 1 for the Spade doubleton. He ponders whether to bid 2 Clubs, forcing, or 1 Heart. He decides that he'd like another Heart to rebid 2 Hearts and better Clubs to rebid 2 No Trump, so opens 1 Heart. West reevaluates to 9 HCPs plus 1 for the 4-card Heart support plus an extra one for the singleton Diamond and rebids 3 Hearts. East reevaluates to 22 HCPs plus 1 for the Spade doubleton and 1 for the fifth Heart. He jumps to 4 No Trump, Blackwood, to check on the Club Ace. When West answers 5 Diamonds to show one Ace, East raises to  Hearts and makes it for the top.
Suppose East instead opens 2 Clubs, forcing. West responds 2 Diamonds, waiting, and East rebids 2 Hearts. This promises a 7-card suit with 21 points, a 6-card suit with 23 points or a 5-card suit with 25 points. West's heart suit is enough to raise to 4 hearts. He also has 9 points and is definitely interested in slam. He would jump straight to 4 Hearts without the extra values, so he raises to 3 Hearts, showing enough for game with extra values. Yes, since 3 hearts forces to game, it's stronger than 4 Hearts. East now jumps to Blackwood as above.
Which is better? The latter has the advantage that West can't pass the opening lead, but also has the disadvantage that West can't pass the opening lead. If he has nothing, East doesn't even make 2 hearts. I like to have what I promise when I open 2 Clubs. 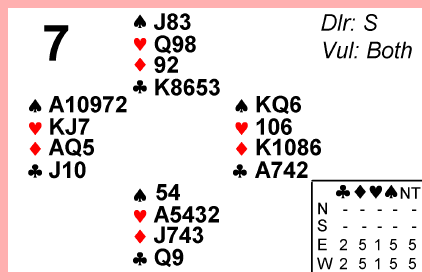 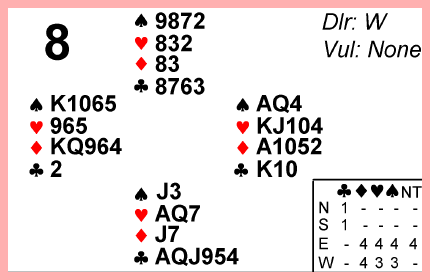 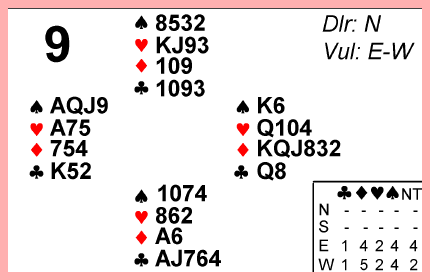 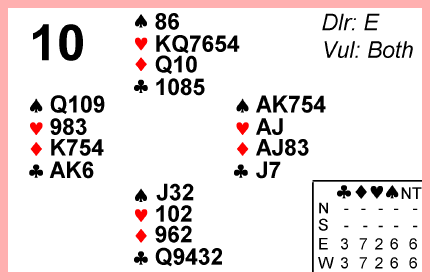 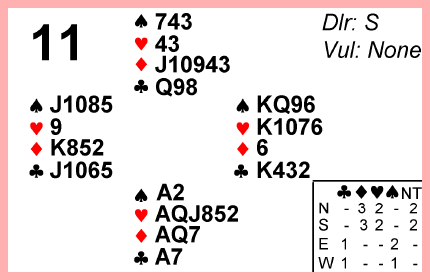 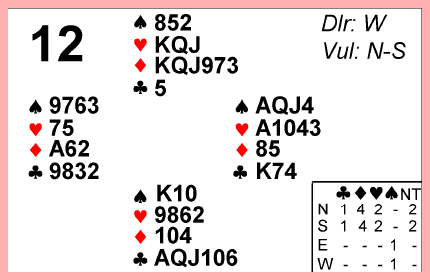 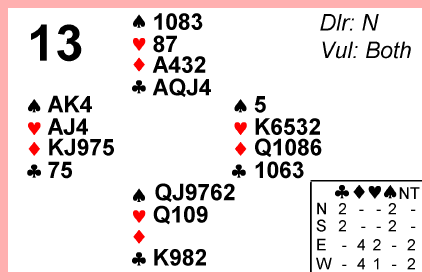 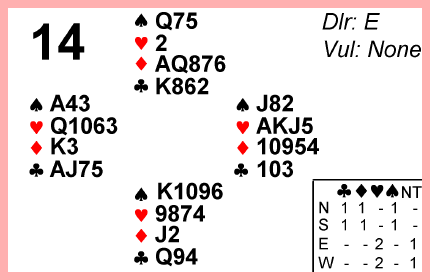 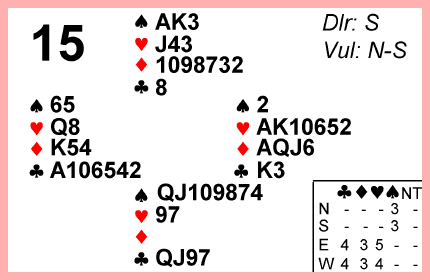 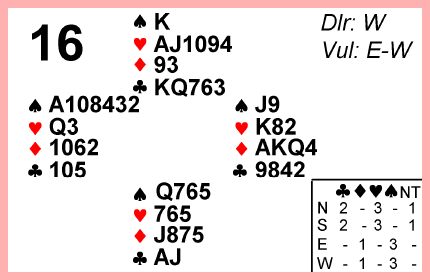 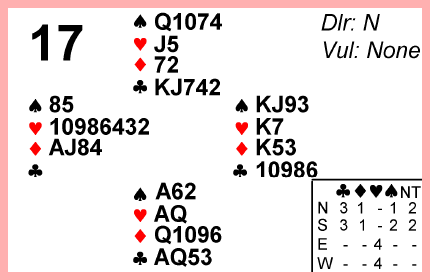 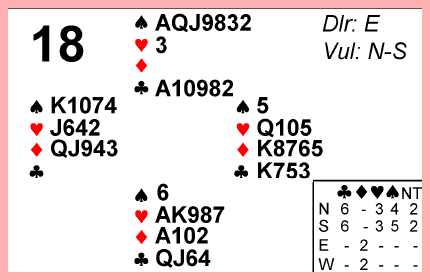