A lovely day for bridge. Congratulations to Wynne and Joe for a fabulous 74.11% for the top. You've all done very well.

Next week we will continue No Trump Openings. Be ready to discuss and have your questions ready.

I will try to post some comments on today's boards. Check back to see what I've done.

See you, Nancy and Dave 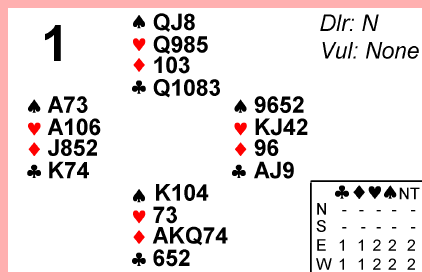 North and East pass and South squeaks out 1 Diamond with a minimum 12 HCPs and a doubleton. West must pass and North responds 1 Heart with his quacky 7 HCPs. South must rebid 1 No Trump and all pass. South either makes it for a top or doesn't for a bottom. At the table, Wynne and Joe passed for the top when the others went down. 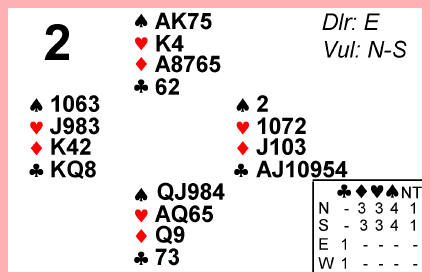 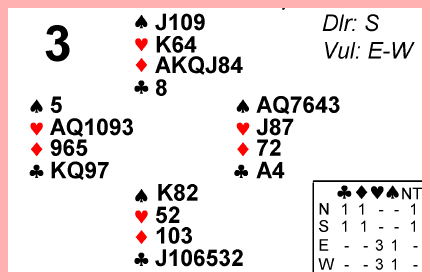 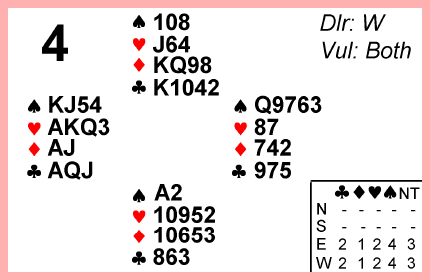 West has a balanced hand with 25 HCPs, so opens 2 Clubs, forcing partner to respond. East responds 2 Diamonds, waiting, to let partner describe his hand. West rebids 3 No Trump, promising a balanced hand with 25-27 HCPs. East hasn't enough to be interested in slam, so ponders whether to just pass 3 No Trump or transfer to 4 Spades. All three Easts stayed with 3 No Trump, but 4 Spades makes against any defense for a higher score. 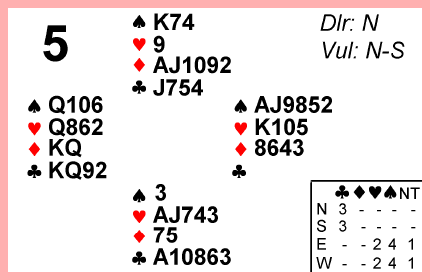 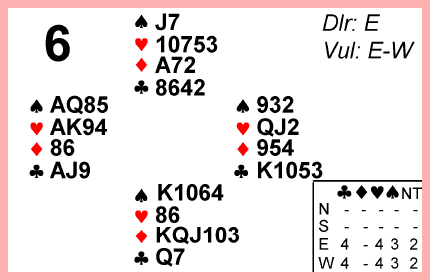 East and South pass and West has a balanced hand with 18 HCPs. This is too much to open 1 No Trump. The standard approach is to open one-of-a-suit and rebid 2 No Trump if partner responds. This promises 18-19 HCPs. East must respond 1 No Trump and West stops to think. Partner has promised 6-10 points and 7 HCPs should be enough for game. He decides that the odds are in his favor, so rebids 3 No Trump. Unfortunately, partner has only 6 HCPs and declarer goes down.
I have no idea how the other table got to 1 Heart, but that comes home for the top. Oh well. 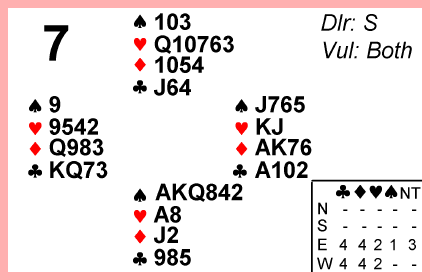 South has a nice 6-card Spade suit and 15 points, so opens 1 Spade. West and North pass and East overcalls 1 No Trump with his balanced hand and 16 HCPs. South considers rebidding Spades, but does the math and sees that the best he and partner can have is 20 Points. Can he make 2 Spades? If his Spades set up, he should be able to set 1 No Trump. He passes. Unfortunately, East has a Spade stopper and makes his bid, but South is still better off than being minus 2 in Spades. 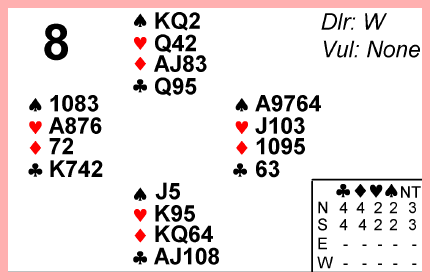 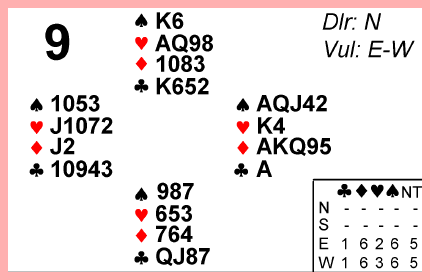 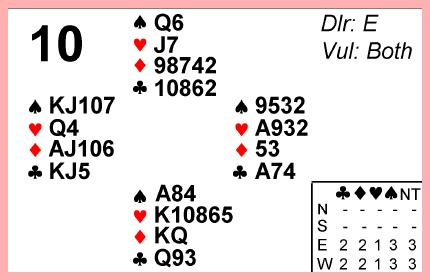 East passes and south opens 1 Heart with his 5-card suit and 14 points. West doubles for takeout, North passes and East advances 2 Spades with his 4-card suit and 9 points. South passes and West stops to reevaluate and think. Partner's jump has promised 9-12 points. West has good support for Spades and 15 points, so invites with 3 Spades telling partner to bid game with 11-12 points and pass with 9-10 points.
East passes and 3 Spades makes for the top (unless some defenders give up an overtrick). 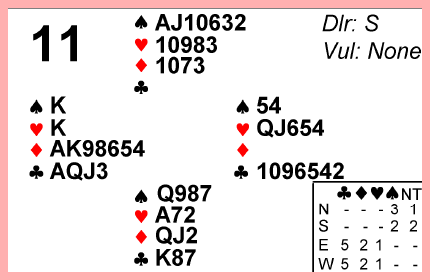 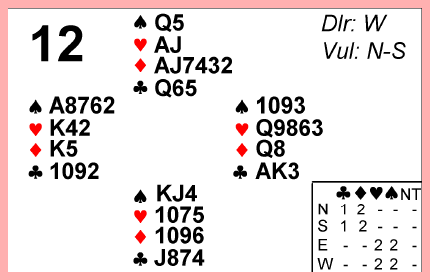 West passes and North opens 1 Diamond with his 14 points and 6-card suit. East and South pass and West overcalls 1 Spade with his 11 points and 5-card suit. North may compete with 2 Diamonds despite partner's pass, hoping he has some points and Diamond support. Since West has previously passed, he has limited his hand to 11-12 points. East hasn't enough to invite, but he does have enough to compete over North's 2 Diamonds. He raises to 2 Spades and all pass. It makes for the top. 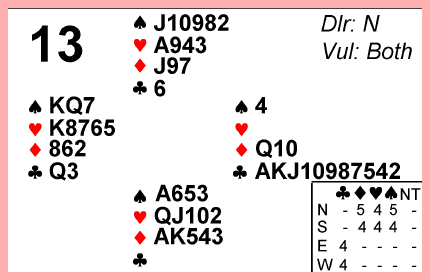 North passes and East stops to count and think. He counts 9 Clubs and thinks Preempt, but he also counts 15 points and can open 1 Club. The preempt causes him to open 5 Clubs in expectation of losing 2 tricks for minus 200. This is to try to prevent the opponents from bidding and making a game causing you to lose more. This is called the rule of Two or Three and you'll learn about it in Lesson 7.
When you have enough to open 1 of your suit, you have more flexibility to find a game you can make, but you give the opponents more flexibility to find a game as well. This is not always an easy decision.
In this case, when you open 5 Clubs, you'll keep the opponents out of the bidding, but you'll go down for minus 100. If you open 1 Club, South will double for takeout (the Big Double), West will redouble with his 10 points and North will advance 1 Spade. You'll bid some number of Clubs, but it's too late. South will now go to 4 or 5 Spades as necessary to give you minus 650.
Hard, isn't it. You can lose either way, depending what the other guys do. Savor this part of the lessons where you're the only ones bidding. 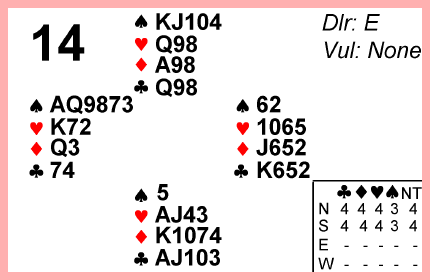 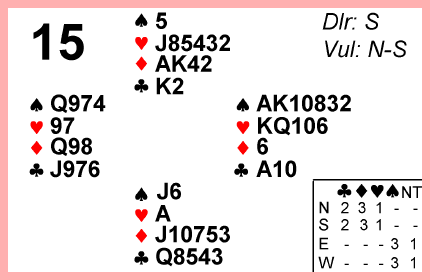 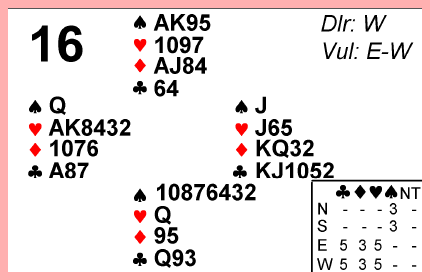 West opens 1 Heart with his 13 points and 6-card suit. North must pass and East stops to count and think. He lacks the 4-card suit to jump to 3 Hearts, so responds 2 Clubs to force partner to describe his hand.
South stops to think. He ponders a weak-jump overcall to 3 Spades, but with no Aces or Kings and a passed partner, he passes. West will rebid 2 Hearts and East will upgrade for his support of the 6-card suit and bid 4 Hearts. It should make for the top.
Even if South boldly overcalls a weak 3 Spades, West will likely rebid 4 Hearts and if he doesn't, East surely will.
If South makes an even worse overcall of 2 Hearts and the opponents pass, North will surely raise to 4 Hearts opposite a 2-level overcall, which they can't make.
It's really hard to get these right until you've finished Lesson 4. Hang in there! 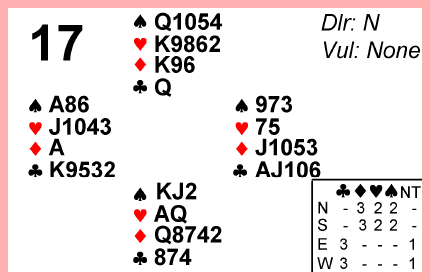 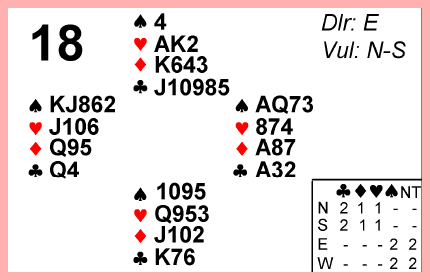