Hi All,
It turned out to be a nice spring day. Congratulations to Walter and Sue for a super 62.11% for the top. You've all done very well.
Check back tomorrow to see if I've added any useful comments on today's boards.
We hope to see you all next time.
Dave and Nancy 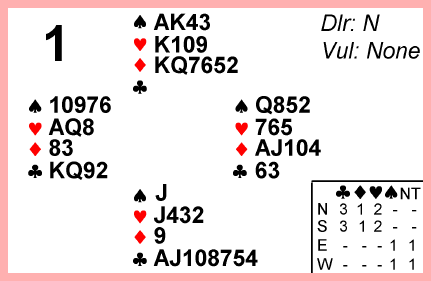 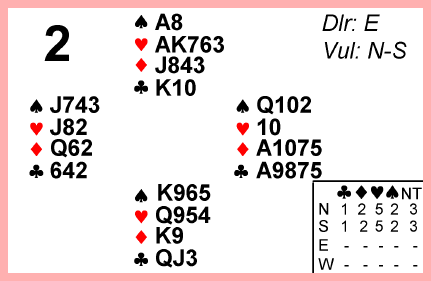 It floats to North who opens 1 Heart. East passes and South stops to reevaluate his hand and think. He sees two approaches to create the magic situation where one partner knows both hands and can place the contract. He can respond 1 Spade to force partner to describe his hand. He then should be able to decide whether to settle for 4 Hearts or probe for slam. He could also limit his hand with a jump raise to show 10-12 points and invite game. Which is better?
The first option usually works. He hopes that partner shows 6 or more Hearts and 17 or more points with a jump to 3 Hearts. South could then jump right to 4 No Trump, Blackwood, and then bid the slam with three Aces or stop at 5 Spades with only two Aces. If partner must instead respond 1 No Trump or 2 of a minor, South can settle for 4 Hearts. He knows that partner has at least 14 points with the fifth Heart and is pretty sure of game. The defenders could conceivably have all the Aces, but that is unlikely.
The second option is usually effective as well, but, in this case, he doesn't want to risk partner passing with 14 points opposite his 12 if he jumps to 3 hearts and might miss a slam if he jumps to 4 Hearts. He'll go with the first option and make 4 Hearts plus 1 for the top. 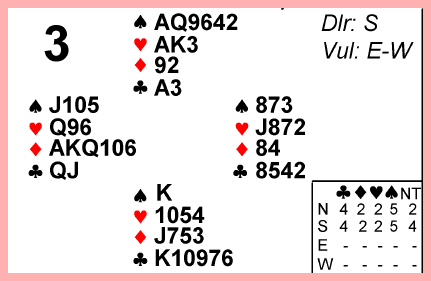 Four pairs made 10 or more tricks in Spades, but only one bid the game. How should it go?
South passes and West stops to think. He has a balanced hand with 15 HCPs, but doesn't like the look of his stoppers. He also sees only two prime honors and 5 Quacks, so downgrades his hand and opens 1 Diamond. North is way too strong for an overcall, so doubles (Big Double - see Lesson 4) with his 19 points and 6-card major. East passes, South advances 2 Clubs and West passes.
North stops to think. He must now bid to show the Big Double and his suit. 2 Spades shows a good suit and 17 or more points, but South could have minimal values and could pass. That's okay, but will partner know what to do if he has 6 or 7 points or good Spades. North decides to show his extra values, so jumps to 3 Spades. South gets the message and raises to 4 Spades. It makes with an overtrick and the top. 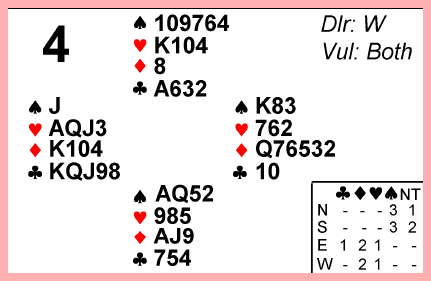 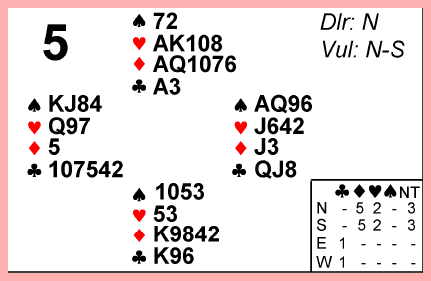 North/South have potential games in Diamonds and No Trump, but only one pair got there. How should it go?
North opens 1 Diamond and South must respond 2 Diamonds with his 7 points and 5-card suit. North stops to think. He knows that partner's minor suit raise denies a 4-card major, so it looks like he will end up in Diamonds or No Trump. He counts 17 HCPs plus 1 for each doubleton and 1 for the fifth Diamond for a total of 20 in Diamonds or 17 in No Trump. He can't be sure if either are enough for game. He can see two approaches.
To probe in No Trump, he can try a control bid of 2 Hearts. Since they both know that they don't have a Heart fit, that bid promises a heart stopper and asks partner to bid his stoppers up the line. South must skip Spades with no stopper and rebid 3 Clubs showing that probable stopper. North would now abandon hope for No Trump and jump to 4 Diamonds to invite that game. South will now count 6 HCPs plus 1 for the doubleton and 1 for the fifth club and go to 5 Diamonds.
North could also just jump to 4 Diamonds to invite the game, but since he can try both by starting with the control bid, he would normally do that. Of course, if he and partner don't know about the control bid as yet, he will be limited to just the Diamonds. Again, stick with us. 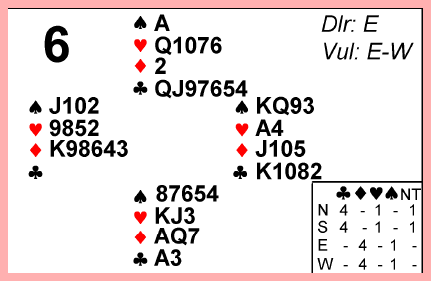 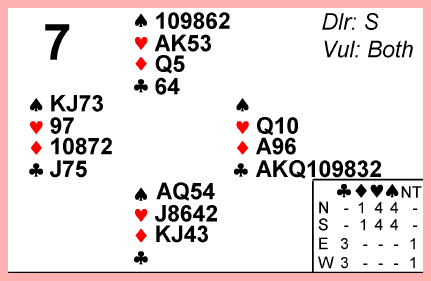 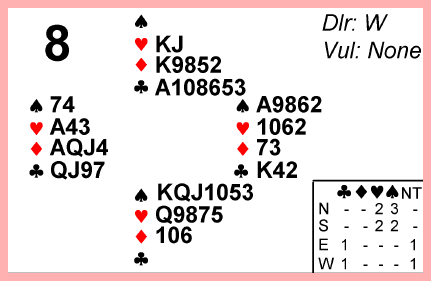 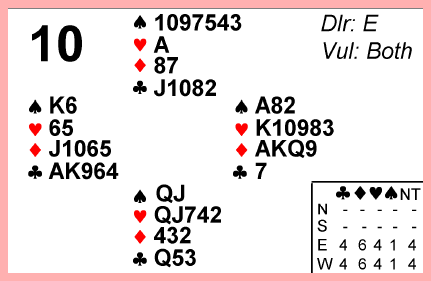 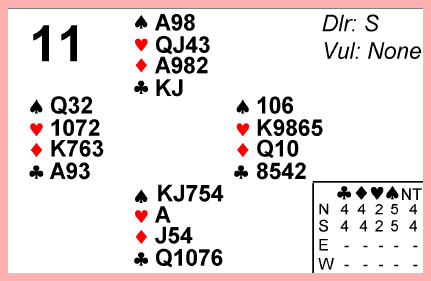 South opens 1 Spade with his 5-card suit and 13 points. North counts 15 HCPs and sees game in either spades or No Trump. Which would be better and how should he proceed?
He considers a jump to 2 No Trump to limit his hand to 13-15 HCPs and let partner decide, but that bid would deny his 4-card Heart suit (See yesterday's lesson) . He can't force with 2 hearts, since that bid would promise 5 hearts (See discussion under board 14). His only truthful response to get more information is 2 Diamonds, forcing partner to describe his hand.
South is now in an awkward spot. His only choices are to rebid 2 Spades promising a 6-card suit, rebid 3 Clubs promising 15 or more points (A 3-level reverse), or rebid 2 No Trump with his singleton Heart. I think most Souths would choose 2 No Trump with the singleton Ace. The other two choices might well land him in an unmakeable slam.
South will now give up thoughts of a slam and choose 3 No Trump or 4 Spades. He will likely choose 4 Spades which would beat 3 No Trump. If south has  any extra values, 4 Spades plus 1 would also beat 3 No Trump plus 1. And so it worked out. 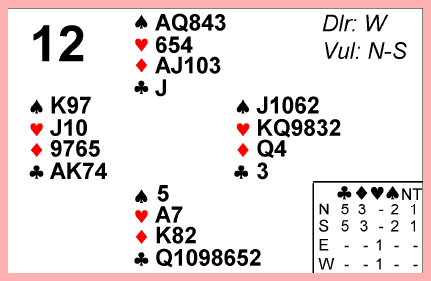 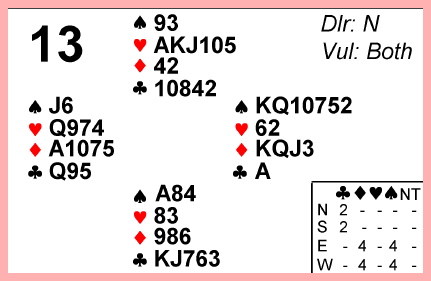 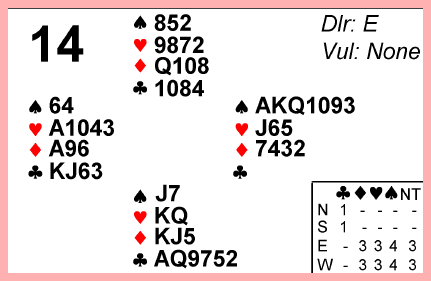 This hand illustrated some points from yesterday's lesson. East opens 1 Spade with his 6 Spades, 10 HCPs and the void. South overcalls 2 Clubs promising 6 Clubs and 13-16 points. West counts 12 HCPs and is interested in game, but has an awkward response. Several Wests wanted to respond 2 Hearts, but this is not allowed for two separate reasons.
First, as discussed yesterday, a 5-card suit is required to respond the suit one below opener's suit. This creates a difficult situation for partner. If he lacks a 6-card suit to rebid or 15 or more points to reverse to 2 diamonds, he must respond 2 No Trump regardless of stoppers.  East has a 6-card suit, but West doesn't know that. When he responds 2 Hearts, he is effectively saying "I know this bid may make it difficult for you, but, in defense, I have a 5-card suit". He doesn't, so can't.
The second reason will be discussed in Lesson 4. When South's overcall forces West to respond at the 2-level, he must have 10 points or more and a 5-card major or a 4-card minor. As you will learn in lesson 4, the Negative Double was invented to handle this situation. That doesn't help West, however, if he doesn't know that. Until then, he is limited to 2 No Trump.
Since East hasn't been misinformed by partner, he will rebid his Spades and West will raise to game. Easy peasy, when you know the conventions. Stick with us and you'll get there. 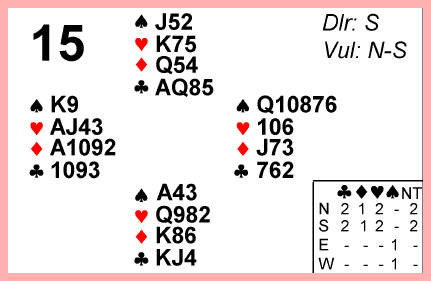 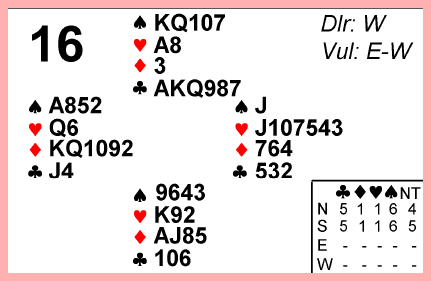 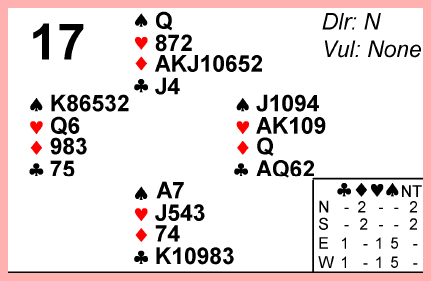 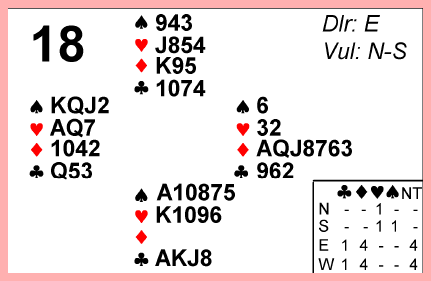