A nice chilly day to be inside looking out. Congratulations to David and Zelda. They didn't let the computer fiasco bother them. They just played on for an unreal 78.21%. I think that's the highest score I've ever seen. You all did very well, considering the circumstances.

Next week we'll push on with Responses and rebids after an Opening Bid of One of a Suit. These are crucial lessons, so try not to miss them.

I'll be trying to sort out the scoring program tomorrow, but I'll try to post some comments on today's boards. Check back here tomorrow.

Thanks for your patience today, 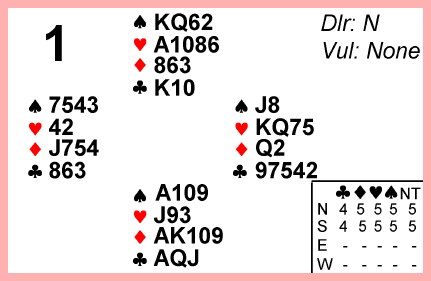 North opens 1 Diamond, East passes and South stops to reevaluate and think. He counts 19 HCPs and is sure that he wants to be in game with his big hand opposite partner's opening bid. He also sees a chance for slam and would like more information from partner. Unfortunately, he has no normal forcing bid and doesn't dare bid anything that partner could pass short of game. He considers a jump to game to show that he has enough for game, hoping that partner may make a slam try if he has extra strength. A jump to game in Diamonds would only promise around 15 points and would also promise 5 or more Diamonds since partner may have only 3 of them. That's out.
He considers 3 No Trump which looks better. According to Lesson 3, a jump to 22 No Trump promises 13-15 points, a balanced hand and denies a 4-card major that he could bid at the 1 level. A jump to 3 No Trump is even better in that it promises the same, but with 16-18 HCPs. That's closer  to his 19 HCPs and partner might make a slam try with a little bit extra. He decides to do that and partner passes with his minimum hand. Declarer can make that bid with overtricks, and there is no slam in any case.
Three pairs were on the right track, but one pair made the poor jump to 3 Diamonds and paid the price with the bottom. 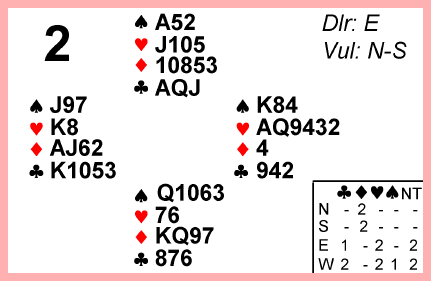 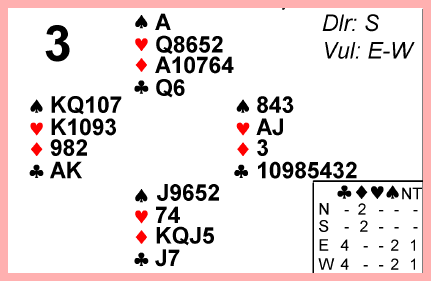 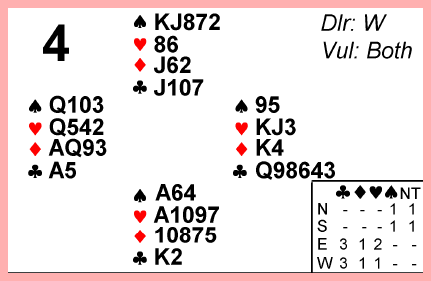 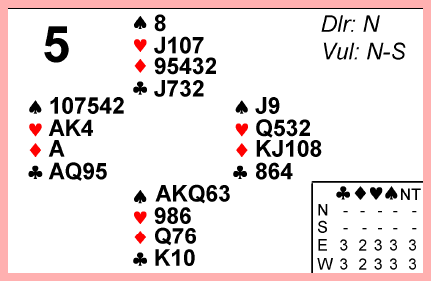 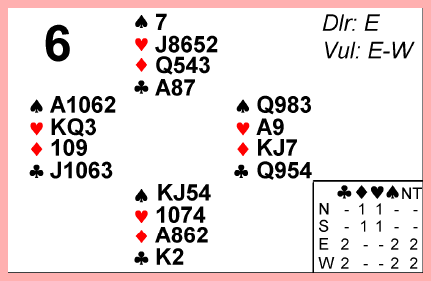 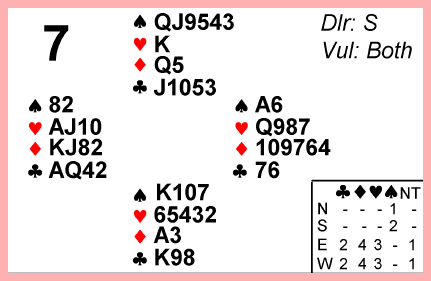 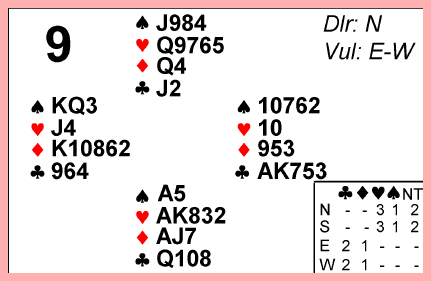 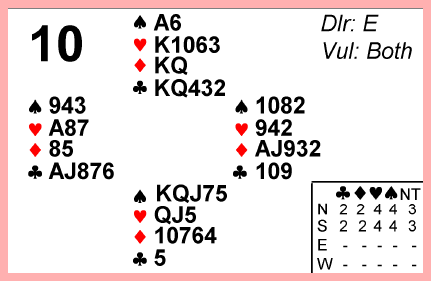 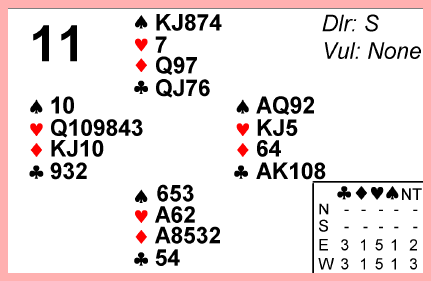 No Trump or hearts? The computer says Hearts are better, but 3 No Trump plus 2 got the top. How should it go?
South passes and West ponders opening a weak-two in Hearts. He decides the suit is too thin since he should have 2 of the top 4 honors, so he passes. North passes and East opens 1 No Trump with his balanced hand and 17 HCPs. West responds 2 Diamonds, the Jacoby Transfer, ordering partner to bid 2 Hearts. West then rebids 3 Hearts, promising 6 or more hearts, 8-9 points and inviting East to bid game. East reevaluates in support of Hearts as 18 points and his good Heart support makes partner stronger, so he raises to game at 4 Hearts. Declarer can make 2 Spades, 5 hearts, 1 Diamond and 2 Clubs for his contract.
I'm not sure how two pairs got to 3 No Trump, but East should not be able to make it. South will surely lead the 3 of diamonds. If declarer doesn't take dummy's King then, the defenders will continue until that entry is forced. When declarer attacks Hearts, South will hold up his Ace until the third time, eliminating declarer's entry to dummy. Declarer's only sure tricks are 1 Spade, 2 Hearts, 1 Diamond and 2 Clubs. He has only 3 entries to dummy and must use them wisely to get more tricks.
Declarer's first entry to the dummy is when he's force to win his King of Diamonds. He must return the 10 of Spades before he attacks Hearts. North will cover with the jack and declarer's Queen takes the trick. He must then lead the Jack of hearts (If he Ace appears, he can set up and run them) and covers it with the Queen. He leads a Club, North covers with the jack and he wins with the Ace. He then leads the 5 of hearts and covers it with the 10. He leads another Club, North ducks and declarer wins with the 8 or 10. He can now take the King of clubs and Ace of Spades for down 1. 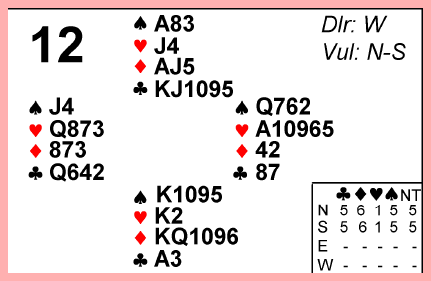 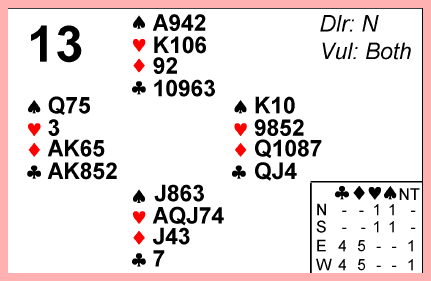 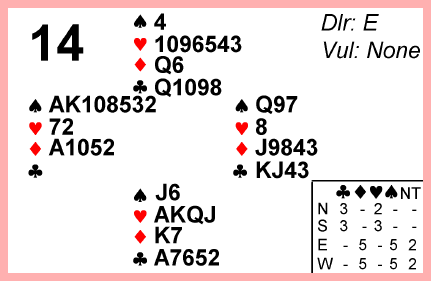 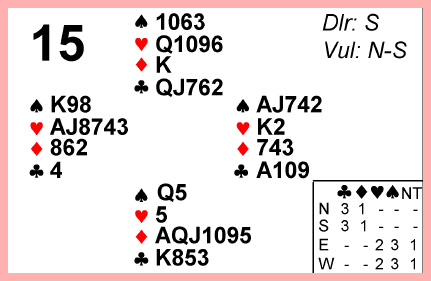 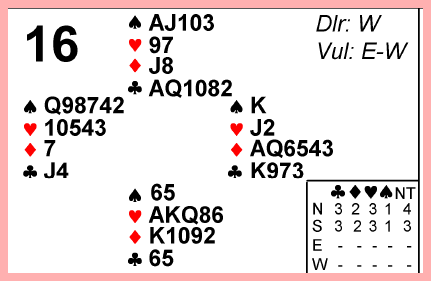 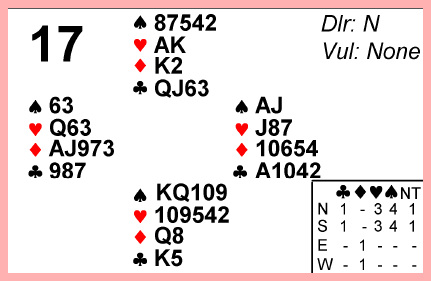 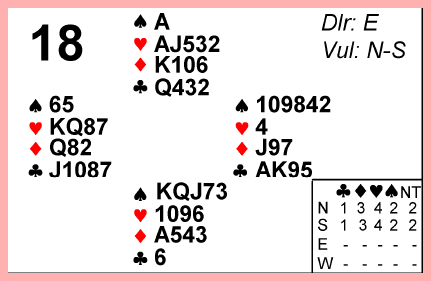