A lovely day for bridge. Congratulations to Sue and Walter for a super 63.33% and the top. You've all done very well.

Check back tomorrow to see if I've done anything useful with today's hands.

We hope to see you next week, 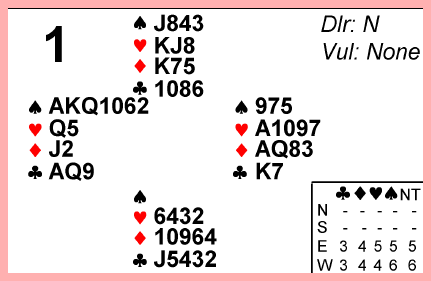 North passes and East opens 1 Diamond. South passes and West responds 1 Spade to force partner to describe her hand. East lacks the 17 points to reverse to 2 Hearts, so must respond 1 No Trump. West stops to reevaluate and thinks.
West sees partner with two suits and 13-16 points and reevaluates as 18 points. She's sure of game but, since partner could have no Spades and only 13 points, he's not sure about slam. He has no normal forcing bid and if he goes to 4 Spades, partner might pass with enough for slam. He decides that he is likely to have enough for 5 Spades, so decides to invite partner to raise to slam if he has anything extra.
West bids 5 Spades and East stops to think. She'll probably decide that  partner surely has 6 or more Spades, so decides that her 3 trumps will make both she and partner stronger, so raises to 6 Spades.
It's a great bid, but she has to make it. North will keep his Kings and the Jack of Spades behind declarer and lead the 10 of Clubs. Declarer will stop to count his sure tricks and make a plan for any more that he might need.
Declarer sees 5 sure Spades, 1 heart, 2 Diamonds and 3 Clubs. She needs one more if the Spades break badly. She wins with the Ace of Clubs and cashes the Ace of Spades to check the trumps. When North discards a Club, she decides that her best chance is to take 3 Diamonds.
She leads the 2 of Diamonds and, when North ducks, plays the Queen. She then leads low to the Jack and North must take the King. Whatever North does then, West will get in to take the Ace of Diamonds, ruff the 3, throwing a Heart from hand, and force the Jack of Spades. She then draws the rest of the Spades and claims the slam. 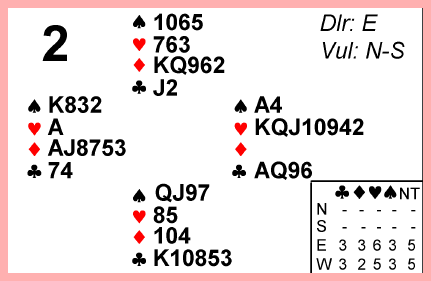 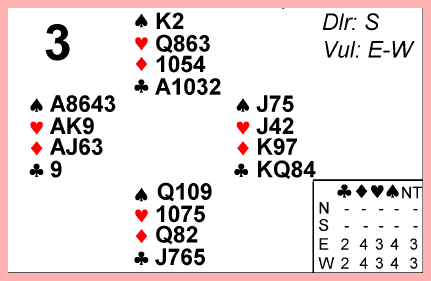 South passes and West opens 1 Spade with his 16 HCPs plus 2 for the singleton. North passes and east responds 2 Clubs to show his 10 points and to force partner to describe his hand. West stops to reevaluate his hand and think. He downgrades his hand to 16 points since they may end up in partners Clubs and rebids 2 Diamonds to show his two suits and 13-18 points. East rebids 3 Spades to show his adequate support and 10 or more points. West reevaluates to 19 points for the singleton again and the 5-card Spade suit. He raises to 4 Spades and makes it for the top.
West probably would have gone to game even if partner only raised to 2 Spades. East had already shown his 10 points, but I like the jump anyway to show adequate support as opposed to just showing preference. 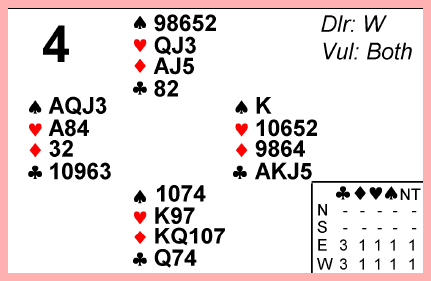 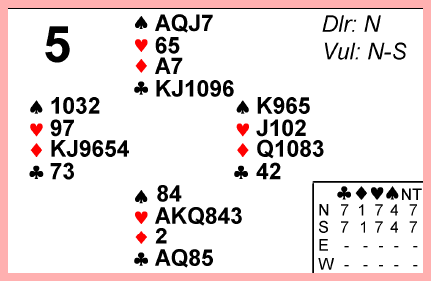 Today's winners got to 4 Spades, but the others stopped short. How should it go?
North opens 1 Club with his 5-card suit, 15 HCPs and 2 more for the doubletons.  East passes and South stops to reevaluate his hand and think. He counts 15 HCPs plus 2 for the singleton and 1 for doubleton. He responds 1 Heart to force partner to describe his hand. North downgrades to 16 points since they may end up in Hearts, so he rebids 1 Spade to show his two suits and 13-18 points.
South must stop to think again. He might have a Club fit, but it could be 4-3. He would like to rebid his 6-card suit because, if partner has support, there might be a slam. His problem is that he has no forcing bid in Hearts. If he rebids 4 Hearts, partner will likely pass. If he bids 4 No Trump, Blackwood, he'll be in at least 5 Hearts and partner may have none. The same problem exists if he invites with 5 hearts. Is he willing to gamble that his Heart suit is self-supporting?
If South is willing to try, either approach should get him to slam, but he got the top anyway with no risk since the others didn't even get to game. Unfortunately, he doesn't know that until it's too late. What would you do? 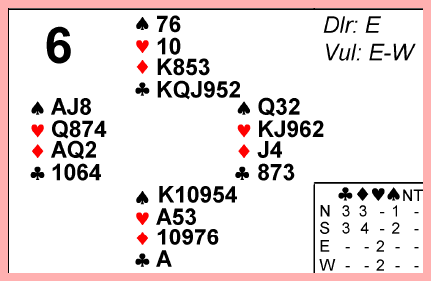 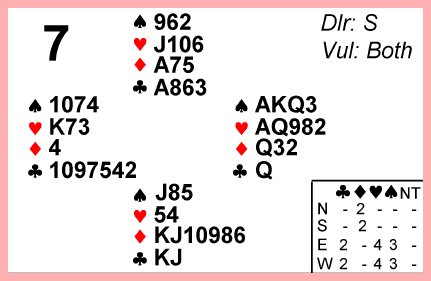 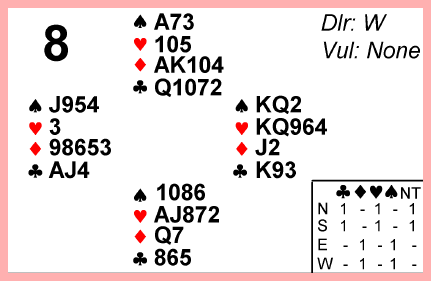 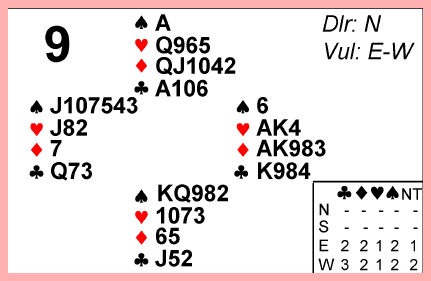 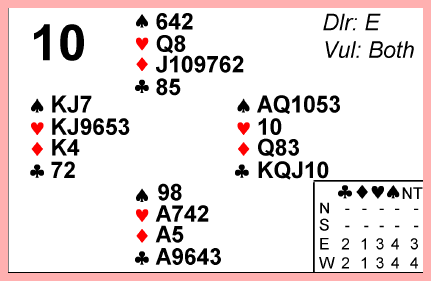 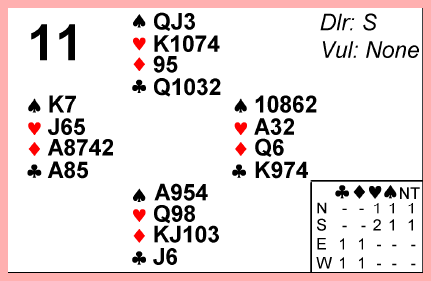 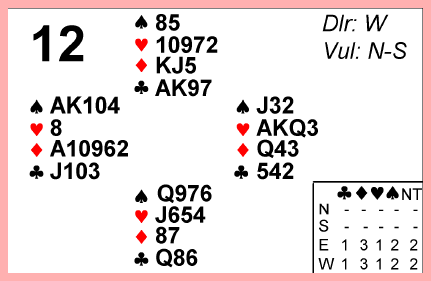 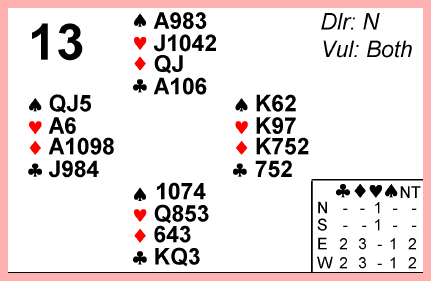 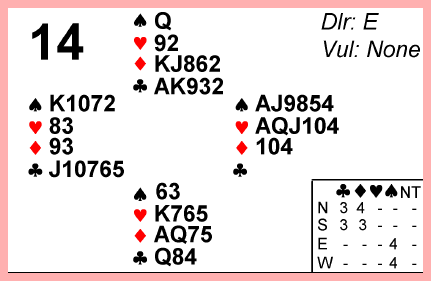 East counts 12 HCPs plus 1 for the doubleton and 3 for the void. He opens his 6-card suit with 1 Spade. South passes and West stops to count and think. He has at least a 5-4 fit in Spades and counts 4 HCPs plus 1 each for the doubletons and 1 more for the 4-card support. He responds 2 Spades and East reevaluates to 19 points and raises to game.
Partner's opening bid greatly improves West's hand. He must reevaluate and respond. 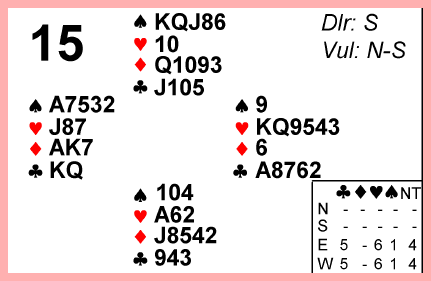 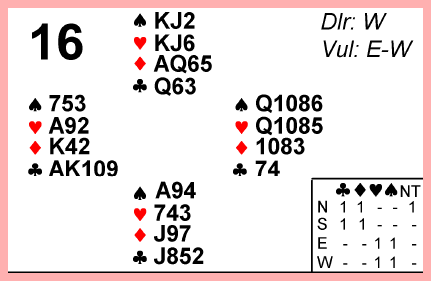 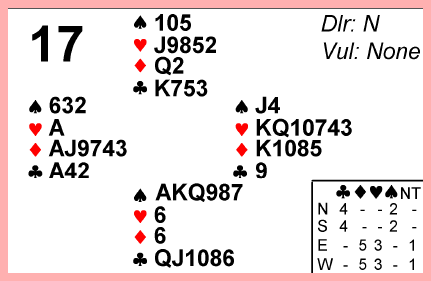 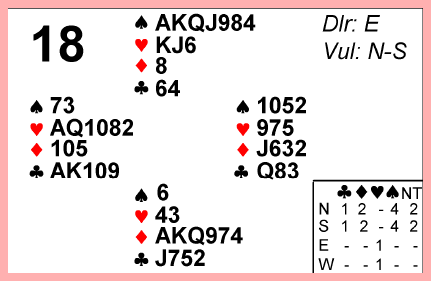