Congratulations to Wynne and Joe for a super 69.44% for the top. Gerri and Kathy scored a near-super 68.06 % and came in just barely short. You've all done very well.

Check back tomorrow. I'll try to post comments on some of the interesting hands. We hope to see you all next week for another great lesson. 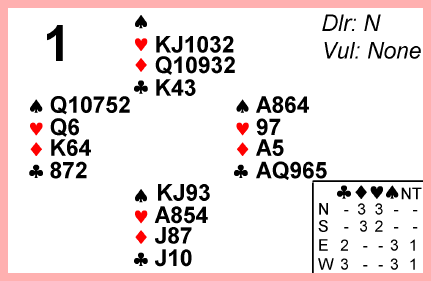 North passes and East opens 1 Club with his 14 HCPs plus 2 for the doubletons. South passes and West responds 1 Spade with his 7 points and 4 or more Spades. North passes and East rebids 2 Spades to show his 4-card support and 13-16 points. South and West pass.
The play contains a cautionary tale. North leads the 3 of Hearts, South takes the Ace and returns a Spade to the Queen and the King. North shifts to the 3 of Diamonds and declarer takes the Ace, cashes the Ace of Spades, revealing the 4-0 split, and continues with a Spade to force out the King. South puts down and honor and West, expecting the King. plays low. He then notices that South had played the Jack, but it's too late. West missed a share of the top by losing focus and hopefully learned a lesson. 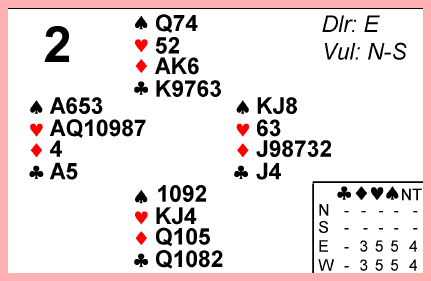 It floats to West who opens 1 heart with his 17 points and 6-card suit. One North overcalled 2 Clubs, but lacked the suit quality for such a bid, especially vulnerable. A 2-level overcall should have 13-16 points with a good 6-card suit or a very solid 5-card suit.
Let's suppose instead that North passes and East must respond 1 No Trump with his 6 points. West describes his hand as 17 or more points and 6 or more hearts with a jump to 3 Hearts. East has adequate heart support, but passes with his minimum hand. It makes for what should be a top, but North's overcall comes back to bite for a bottom, giving the opponents a top. 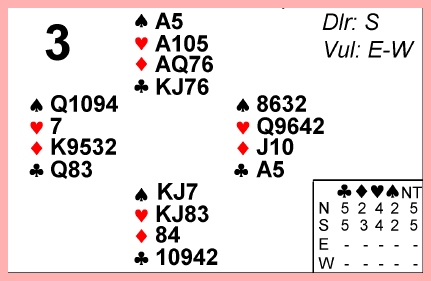 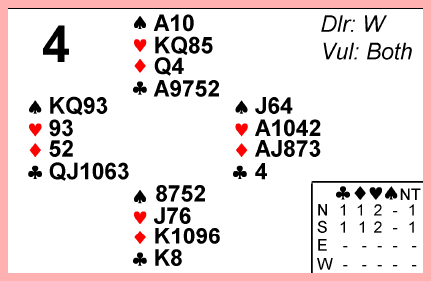 This is a good hand to discuss No Trump openings. You'll have a lesson on this soon, but remember this hand when you get there. One of the most important things about a No-Trump opening is that you describe your hand with one bid and your partner has systems to steer the auction. The ACBL has made it not illegal to open No Trump with 6-card suit, two singletons or other variations. Your instructors feel that this defeats the value of your partner knowing what you have, so don't endorse it. You will learn that there are only three balanced hands: 5-3-3-2, 4-4-3-2 or 4-3-3-3.
That being agreed, North must open 1 Club with his 5-4-2-2 hand even though he holds 15 HCPs. Let's suppose East overcalls 1 Diamond. South will probably respond 1 Spade with his 7 points and West will pass. North stops to think. He shouldn't rebid 2 Clubs without a 6-card suit and he lacks the 17 points to reverse to 2 Hearts, so his choices are to pass 1 Spade when partner might have a 4-2 fit or bid 1 No Trump with only 2 of East's suit. He chooses the best of two evils, 1 No Trump and it makes for a good score.
Let's suppose that East instead passes over North's opening. South will respond 1 Diamond, North will rebid 1 heart and South will rebid 1 Spade. North now goes to 1 No Trump and again it makes for a good score. Much easier this time, which shows the disruptive value of an overcall. 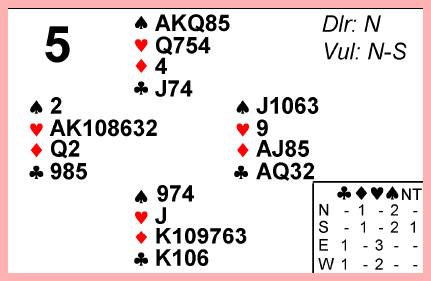 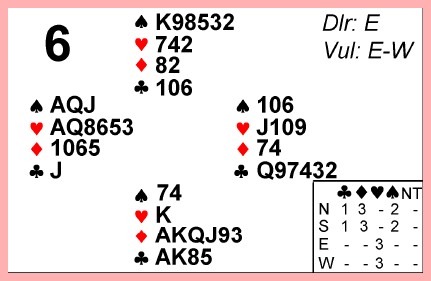 This is a chance to spotlight a bid that you won't see too often. There are no longer strong jump-shift responses to an opening bid since they have become weak. This means weaker than 6 points so that the responder can only pass otherwise.
East passes and South opens 1 Diamond. West overcalls 1 Heart and North stops to think. His hand is probably worthless to partner unless Spades are trump and if he passes, partner might have to pass as well. He decides to bid 2 Spades, too weak for anything else and expects that partner will pass.
In this case partner has a good hand, so stops to think. He has adequate support for the Spades, so might pass. He has only promised 3 Diamonds, though, so partner may have support. He can see 8 tricks in Diamonds. Could partner add a trick? He decides to try 3 Diamonds. North passes as promised and, as luck would have it, his King of Spades adds a ninth trick.
Either 2 Spades or 3 Diamonds will make for a good score, but I would have preferred that South pass with only 8 tricks and no promises from partner, other than long Spades. 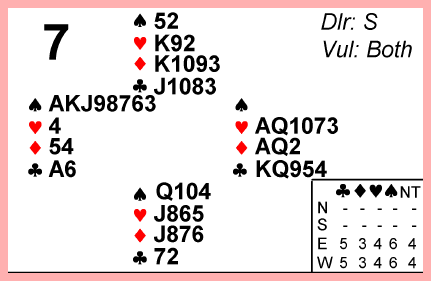 South passes and West stops to think. He sees 8 tricks and maybe 9. According to our Lesson 7, he could open 4 Spades with equal vulnerability. Partner will surely pass that, though, and he'd like more information. Unfortunately, he has no forcing bids in Spades. He decides to risk 1 Spade, figuring that if partner can't respond, he may not be able to make 4 Spades anyway. He does so.
East counts 17 HCPs, but no Spades, so he responds 2 Hearts showing 5 or more  Hearts, 10 or more points and forcing partner to describe his hand. West still has no forcing bid in Spades. He decides that his Spades are self-supporting, in that he wants to play in Spades even if partner has none, and reevaluates to 23 points. He thinks that he can make 11 tricks even if partner has no Aces, so jumps to 4 No Trump, Blackwood.  East responds 5 Hearts to show his 2 Aces and West goes to 6 Spades.
Declarer sees 12 sure tricks and ponders the 13th. He can't lead Spades from dummy for a finesse even if he cared to risk it, so cashes the Ace, King when he get's the lead, hoping to drop the Queen. When that fails, he claims his 12 tricks. 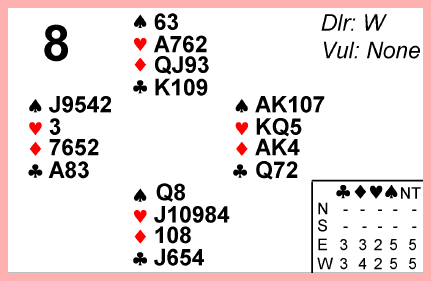 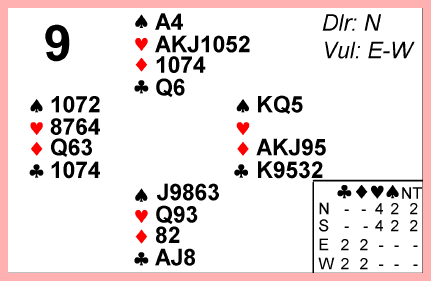 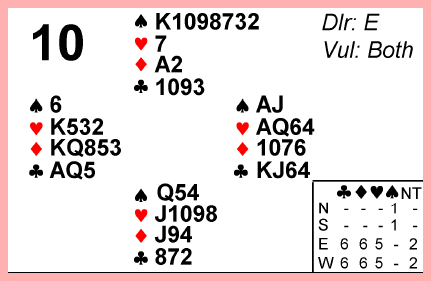 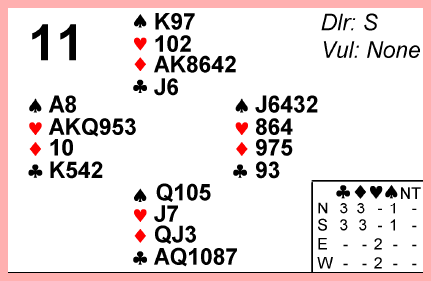 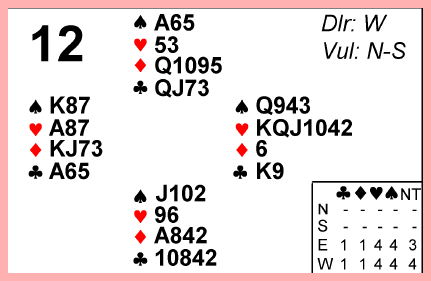 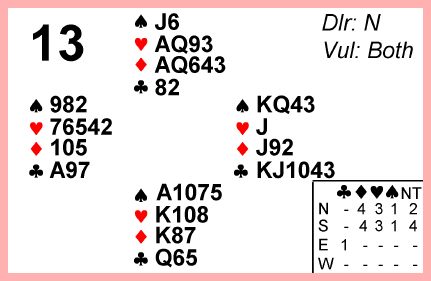 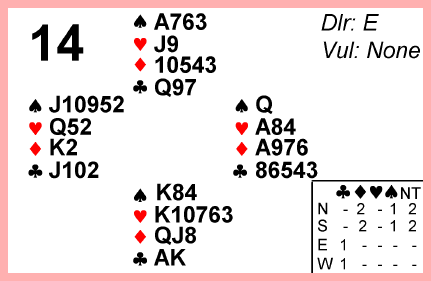 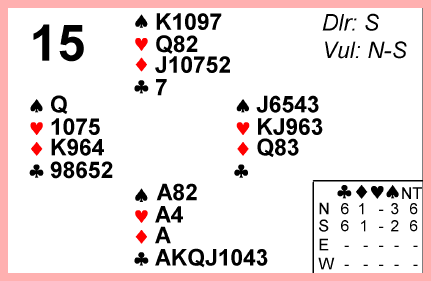 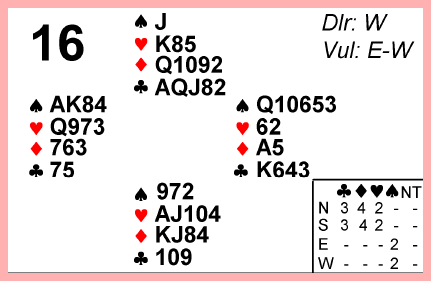 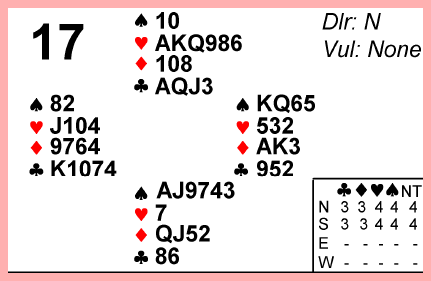 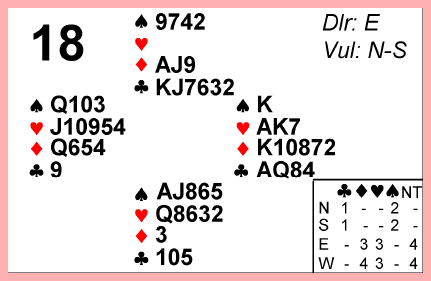