Congratulations to Delores and Paula for a super 67.04% for today's top. You've all done very well.

We'll continue next week with Lesson 2, opening and responding to 1 of a suit bids.

Please help pass the word to any others who might be interested in starting these lessons near the beginning.

Check back tomorrow to see if I've posted any comments on today's boards. I'll do my best in between getting ready for Thursday.

See you next time, 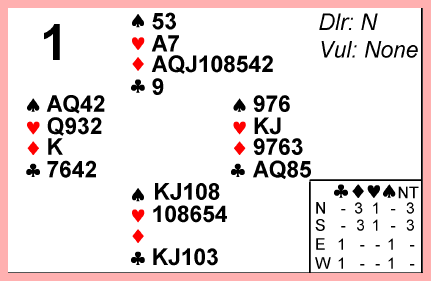 North counts 15 points and 8 tricks, way too strong for a preempt of 4 Clubs. He opens 1 Diamond, giving his partner to show a strong hand if he has one. East passes and and South responds 1 Heart with his 8 points, forcing partner to describe his hand. West is too weak to double for takeout and lakes a suit to overcall, so passes. North stops to ponder whether to rebid 2 Diamonds or 3 Diamonds. His point count of 15 says 2 Diamonds, but he decides that he wants to be in Diamonds whether partner has any or not. He reevaluates his self-supporting suit by adding 1 point for the fifth Diamond and 2 points each for the sixth, seventh and eighth and rebids 3 Diamonds. Now South knows that partner has at least 6 Diamonds and at least 17 points. He's tempted, but passes with his near minimum count and no trump support.
Herb and David made their contract, but Joe made an extra trick to steal the top and Delores and Paula overbid for the bottom. 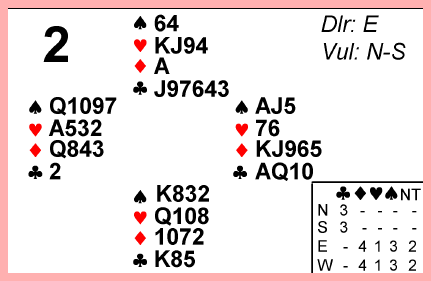 We haven't had lesson 3 yet, but, when we do, you'll learn to always open 1 No Trump with a balanced hand and 15-17 HCPs. It's very descriptive and your partner has systems to find a major fit if there is one. In this case, West will respond 2 Clubs, the Stayman Convention, to tell you to bid a 4-card major if you have one. You will respond 2 Diamonds to tell him that you don't, so he bids 2 No Trump with his 8 HCPs. Sue makes an overtrick for the top. 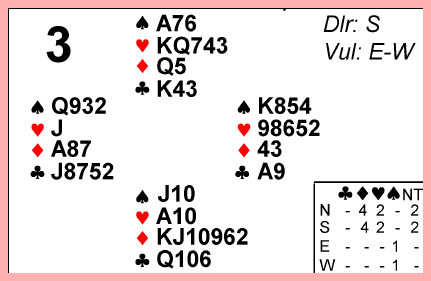 South counts 11 HCPs and adds 1 for the doubleton Ace-10. This is too strong for a weak 2 Diamonds and weak for 1 Diamond. Suppose he opens 1 Diamond, West passes and North responds 1 Heart, forcing South to describe his hand. South must rebid 2 Diamonds and North stops to think. He has 14 points opposite South's opening bid and is interested in game. It's a long way to 5 Diamonds, so he goes to 3 No Trump and down.
When we suppose South does not open, North will open 1 Heart and South will respond 2 Diamonds promising at least 10 points and 5 or more Diamonds. North rebids 2 No Trump and makes it for the top. 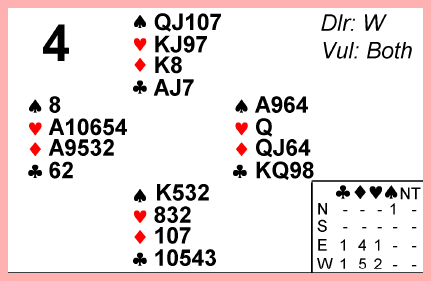 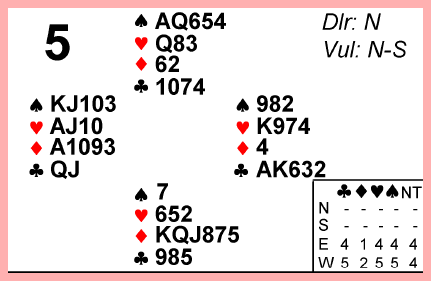 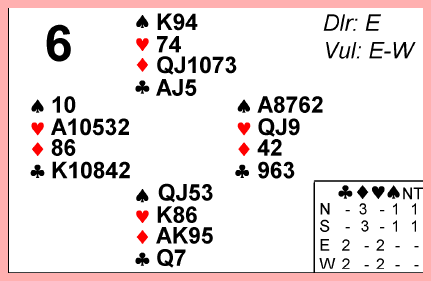 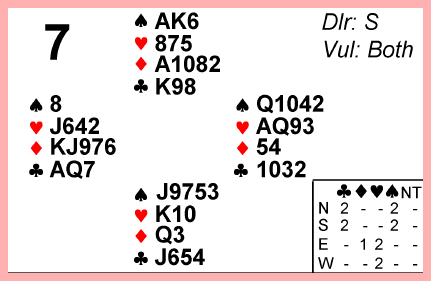 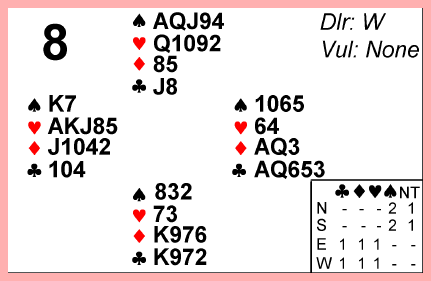 West counts 12 HCPs and 1 each for the doubletons and opens 1 Heart. North thinks about passing with his good Hearts, but overcalls 1 Spade with his 10 HCPs plus 1 for the Diamond doubleton. East responds 2 Clubs with his 12 points and 5-card suit and South stops to think. North has limited his hand to 11-16 points with his overcall. North can't invite game, but he decides to compete with 2 Spades. West is now in a jam. If he passes, North might make 2 Spades, so he rebids a queasy 3 Diamonds. A rebid of 2 Hearts promises a 6-card suit and risks partner going to 4 Hearts and going down even bigger.
As it turns out, no one is allowed to play 2 Spades, so 3 Diamonds -2 is a top. Ugh! 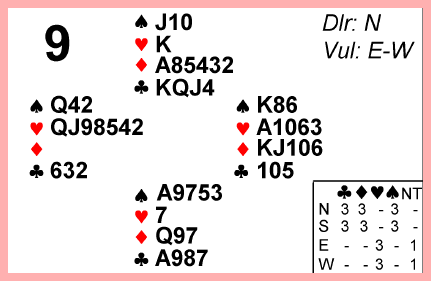 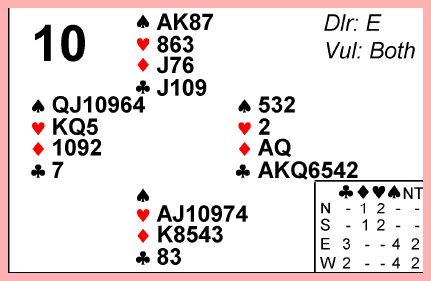 East opens 1 Club with his 15 HCPs plus 2 more for his singleton and his good Club suit. South overcalls 1 Heart with his 8 HCPs plus 4 more for his void and doubleton. Undaunted, West responds 1 Spade with is 8 HCPs and solid 6-card suit. Needless to say, North passes and East stops to reevaluate and think. He sees 8 reasonably sure tricks in Clubs, but can partner add 3 to make 5 Clubs? He has only promised 6 points and 5 Spades. East decides to not be hasty, so jumps to 4 Clubs to describe his hand as 17 or more points and 6 or more Clubs and invite game.
South passes and West stops to reevaluate and think. He sees just 8 points in support of Clubs with poor support, so hesitates to raise to 5 Clubs. He sees 10 points in Spades which should be enough if partner has any Spades support. He decides to raise to 4 Spades and hopes that partner will pass with Spade support and correct to 5 Clubs with poor support. Two pairs bid 4 Spades, but didn't make it.
How should it go? North will surely lead a Heart towards South's overcall. South must take the Ace and whatever he returns will allow South to force out the trumps and take the rest. No other opening lead will be better. 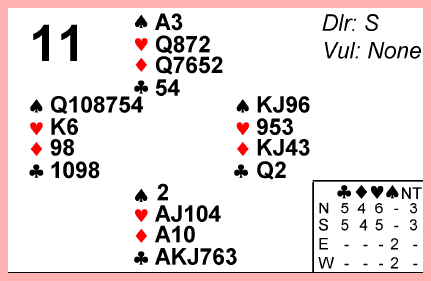 The top goes to 4 hearts, but the slam is there. Can we bid it?
South counts 17 HCPs plus 3 for the Singleton and doubleton. He opens 1 Club, intending to jump-shift to  Hearts to force to game next time if partner is able to bid. West lacks the required 2 out of the top 4 Spade honors for the weak-jump overcall, so he passes. North responds 1 Diamond to force partner to describe his hand and South jumps to 2 Hearts as planned.  North is sure of game, but since slam is possible, hesitates to just jump to game. He also hesitates to force with a Spade since this would perhaps be seen as denying a fit and lead partner to bid No Trump.
North sees two options. He can jump to 4 No Trump, Blackwood, to promise a fit somewhere and to ask for Aces, but he might still not be sure after partner responds. He decides to jump to 5 Hearts to show the fit and enough to make 11 tricks and invites South to go to slam if he has more than the two suits and 19 points he promised. South has an easy choice with his 20 points and 6-card suit, so he bids the slam and makes it. 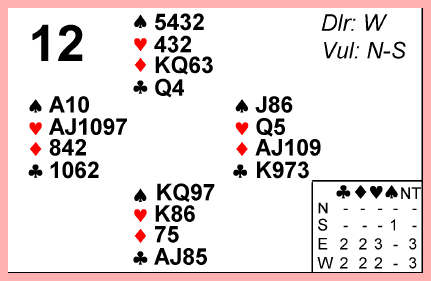 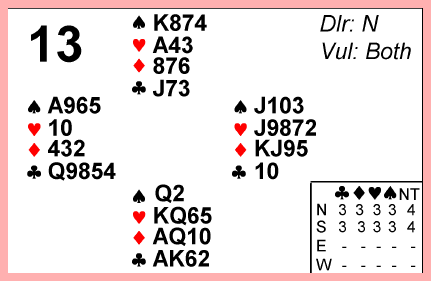 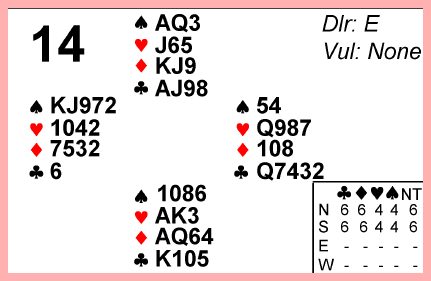 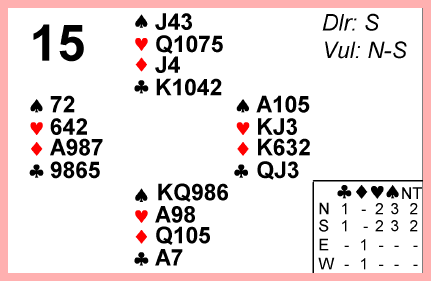 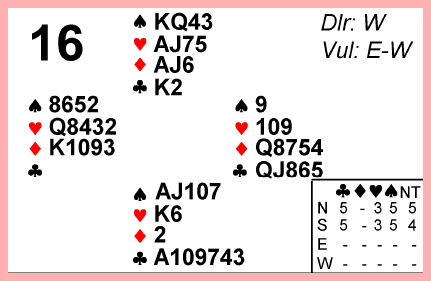 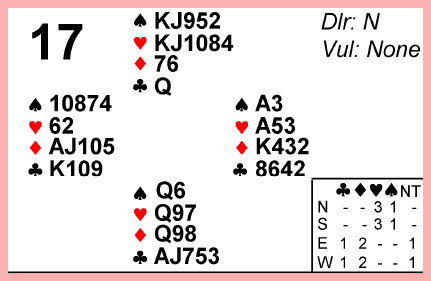 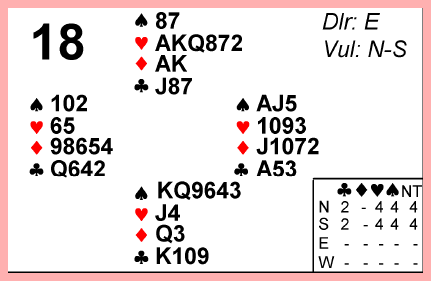