Congratulations to Gerri and Kathy for a great 68.33 for the top. You've all done very well.

Next week will be the restart of the Beginner to Standard American Lessons. Nancy Pierce will be your new teacher and we're very excited to get this valuable program started again.

Check back tomorrow and Thursday to see if I've written anything important about today's hands.

Tell your friends about the new program starting on 9 March, An ACBL Sanctioned Game!

See you next time, 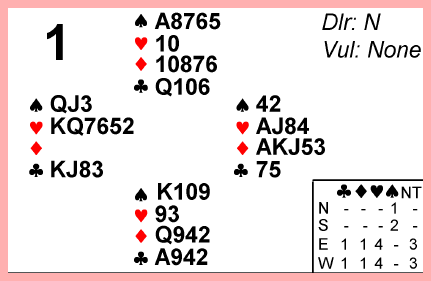 North passes and East opens 1 Diamond with his 15 points and two good suits. South passes and West stops to reevaluate and think. He sees 12 HCPs and he can add 3 points for his super fit and his void is now worth 5 points. He's sure of game, but, since there might be a slam, he responds 2 Clubs to force partner to describe his hand.
East rebids 2 Diamonds to show his two suits and 13-16 points. West stops to think again. He sees a lot of distribution points, but a very possible 3 Losers. He decides to bid a cautious 4 Hearts and is glad he did when the dummy comes down. 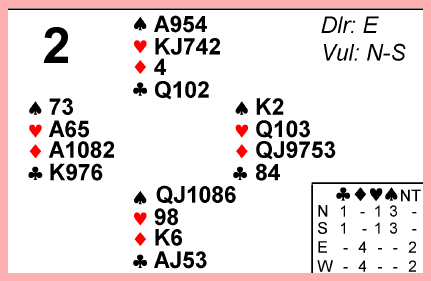 Technically, East has enough for a weak-two with his favorable vulnerability, but, with only one King and three Quacks, he'll probably give it a go. South opens a minimum 1 Spade, West passes and North stops to reevaluate and think. With the good fit, he counts 10 HCPs, plus 1 for the 4-card fit and 3 for the singleton giving him a total of 14 points. He responds 2 Hearts, promising a 5-card Heart suit and forcing partner to describe his hand. Most Souths would rebid 3 Clubs to show their two suits and 13-16 points and most Norths would raise to 4 Spades and probably go down. I'm sure I would have joined them. Carol and Hildy stopped at 3, however, and made it for what should have been a top.
For some reason, however, Darrell chose 3 No Trump and made an overtrick. I'm sure he'll still be telling his great-grandchildren how he made 10 tricks at No Trump with 8 sure losers. This is a cruel game. 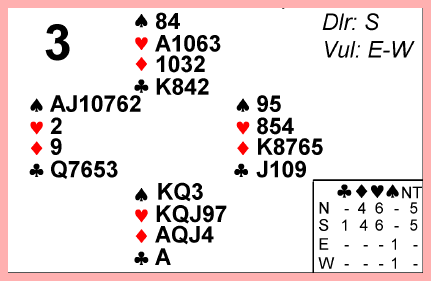 One pair bid and made the Heart slam. How should it go?
South counts 22 HCPs. He should normally have a balanced hand or a 6-card suit, but he expects to find a suit fit and adds 3 points for the singleton Club and opens with a forcing 2 Clubs. North responds an artificial 2 Diamonds so that South can describe his hand. South doesn't have game in hand, so rebids 2 Hearts to show his best suit and that he needs a little help from partner for game.
North bids 3 hearts to show that he has enough for game and has extra values. He would have bid the game with just enough for game or passed with not enough. South reevaluates his hand for the suit fit as 26 points and with partner's extra values, jumps to 4 No Trump, Blackwood, to check for Aces. When North bids 2 Diamonds to show 1 Ace, South bids the slam. Unfortunately,, he needs the Diamond finesse to make it, but Darrell's luck holds and it comes home.
I would have preferred an opening 1 Heart, probably overcalled 1 Spade by West. North would raise to 2 Hearts, showing Heart support and 6-9 points. South would reevaluate for the suit fit and probably bid 5 Hearts, asking partner to bid the slam with extra values. North would add 1 point for the 4-card support and another for the Spade doubleton and bid the slam with a maximum 9 points. Still not a perfect slam needing the finesse, but it succeeds. 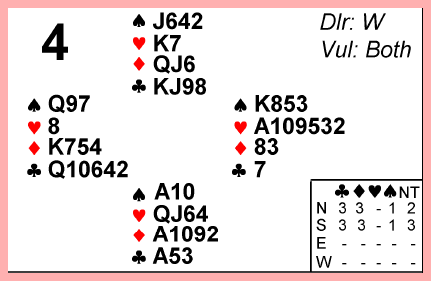 It floats to South who opens 1 No Trump with his balanced hand and 15 HCPs. North may just respond 3 No Trump or look for a fit with 2 Clubs, Stayman. South will rebid 2 Hearts and North will then go to 3 No Trump. Everyone's there so it boils down to the play.
West will open the 4 of Clubs and South will stop to count his tricks and make a plan. He sees 3 Club tricks, given the lead, 1 Diamond, and 1 Spade. He sees enough stoppers to win the Club, force the Ace of Hearts and lose the Diamond finesse, so adds at least 5 tricks and adds another when the Jack of Clubs holds the trick. If  West leads otherwise, it will be more difficult to get the overtricks, if at all. 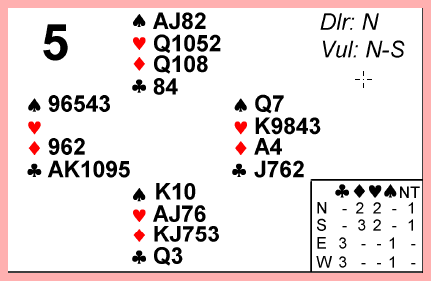 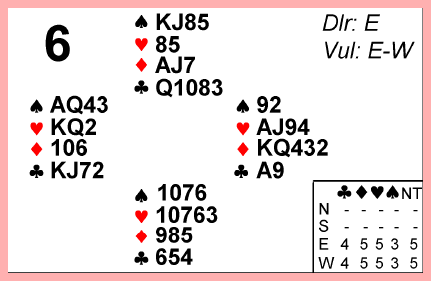 Again, a battle for overtricks. This time, you do the analysis! 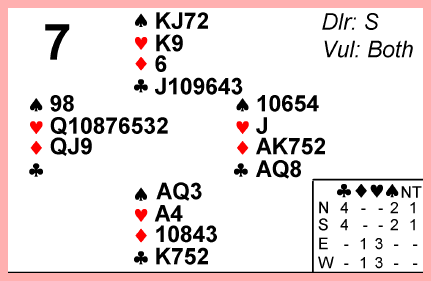 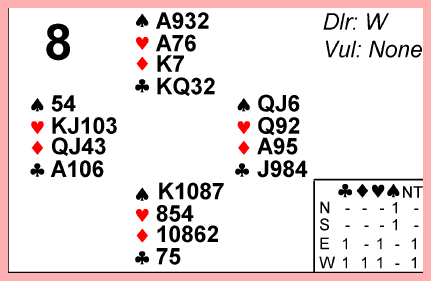 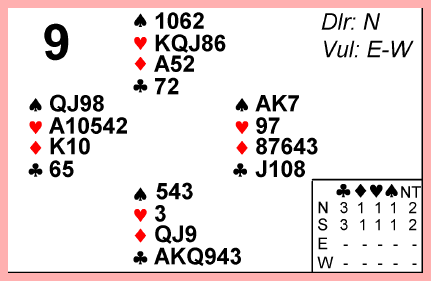 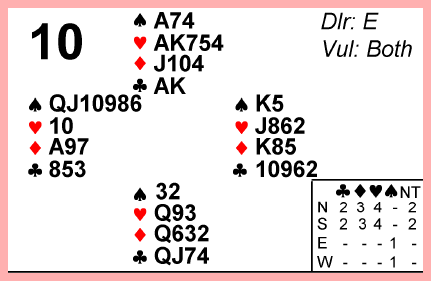 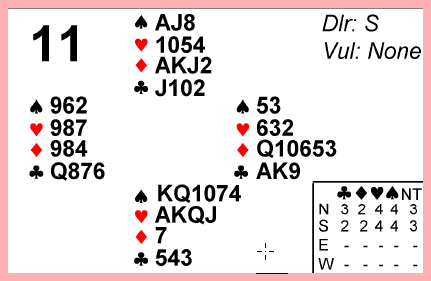 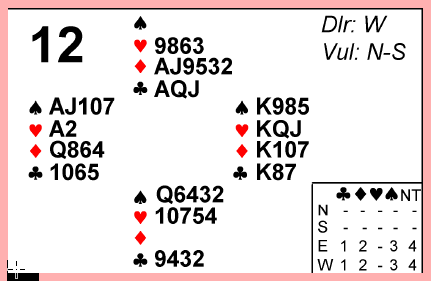 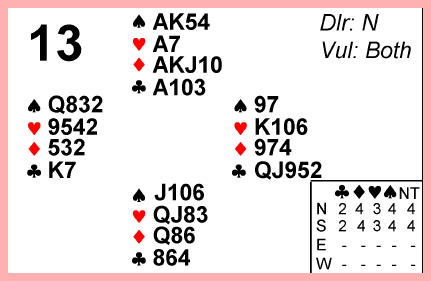 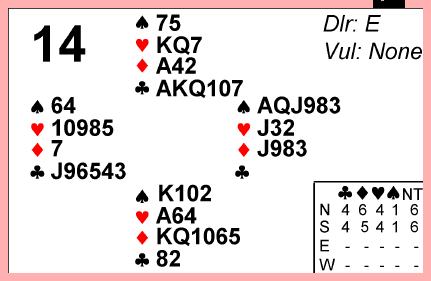 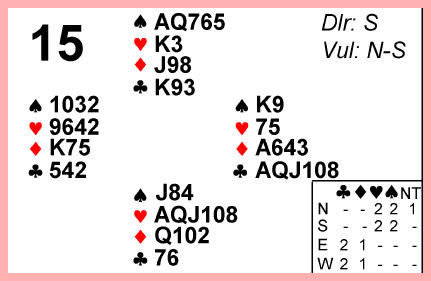 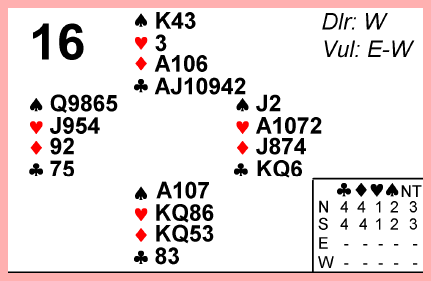 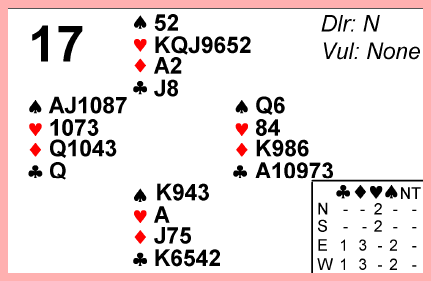 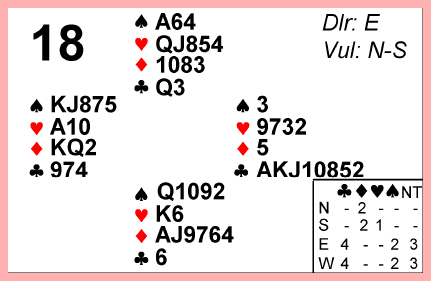