Congratulations to Marion and Cynthia for a nice steady 60% for the top. Also to Margie and Hildy for a fast-closing 59% to just miss. You've all done very well.

Next week will be another lesson on defensive play, followed by a similar game. The following week, 8 March, we'll officially start the Beginner to Standard American lessons. If you have friends who are interested, they're never be a better time to start.

Check back tomorrow and Wednesday. I will try to enter comments on some of the interesting boards.

Hope to see you, 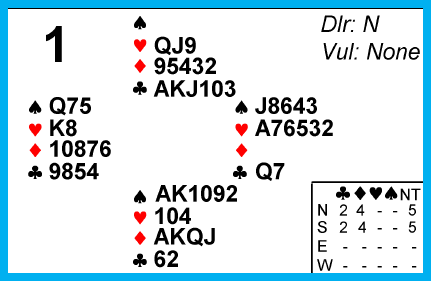 This board is interesting because the results are all over the place. How should it go? South must open 1 Spade since his hand is not balanced with the two doubletons. North must respond with his 11 points and the void. Which 5-card minor? If he chooses the Diamonds and later bids the Clubs, he shows his 5-card Diamond suit (He would have bid up the line with 4-card suits), but the Club could be a 4-card suit. If he chooses the Clubs and later bids the Diamonds, they could both be 4-card suits. Since neither option is obviously better, I think most of would choose 2 of the sturdy Clubs showing 10 or more points and at least a 4-card suit.
South will now bid 2 Diamonds, showing at least a 4-card suit, but not enough to jump-shift. He's close but can't count a point for his doubleton Clubs since partner may keep bidding them. I think  every North in the world would bid No Trump over that sequence and South would raise to 3. Maybe Jim initially responded 2 Diamonds and steered them away from the best contract. 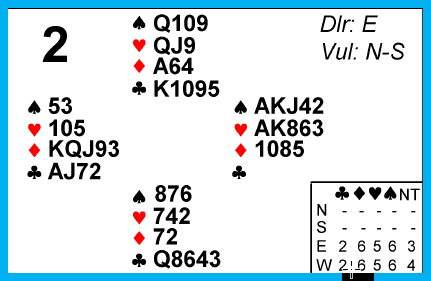 Darrell boldly got to slam and made it for a top. I still think 3 No Trump was the better contract. If I knew I would always get 3-3 splits for both of my 5-2 majors, I'm sure I would also bid the slam. 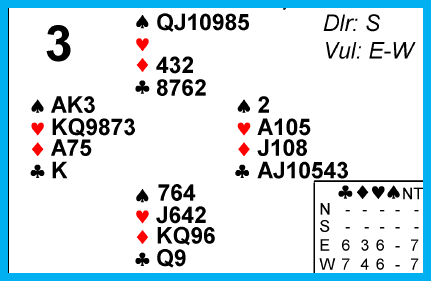 West will open 1 Heart and East will respond 2 Clubs to show his 10 or more points. West will Jump to 3 Hearts to show his 6 or more Hearts and 17 or more points. With his Heart support East reevaluates his hand to 13 points and knows that his trump support gives partner at least 20. He's interested in slam, but he first jumps to 4 No Trump (Blackwood) to check the Aces. West responds 5 Hearts to show his two Aces and East stops to think. He ponders Hearts or No Trump and considers the grand slam. He bids 6 Hearts, but unluckily goes down. There's no justice in this game. 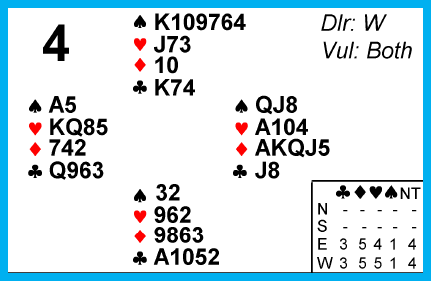 West passes and North lacks the 2 out the top 3 honors for a vulnerable weak two. East opens 1 Diamond and West responds 1 Heart, forcing partner to describe. East jumps to 2 No Trump with his balanced hand and 18 HCPs. West raises to game with his 11 HCPs. It makes an overtrick for the top. 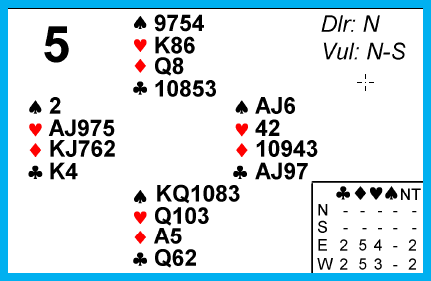 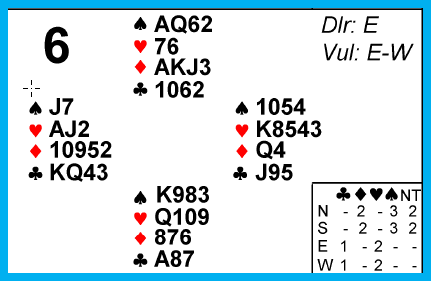 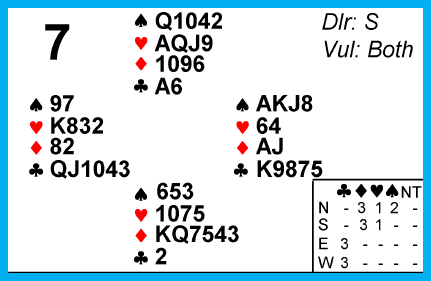 This board shows the disruptive power of the weak two, even 2 Diamonds that many players have abandoned. South opens 2 Diamonds and West passes. North has a minimum opening hand, but doesn't see game, so passes. East has a hard choice, but may double. She figures that she'll be okay if partner advances Clubs or Spades and can correct to No Trump if partner advances Hearts.
Now West has the classic problem of whether to bid her 4-card major or 5-card minor. If she chooses 2 Hearts, North will pass and East will correct to a disastrous  2 No Trump (unless she's as lucky as Jim). If she advances 3 Clubs, North will compete to 3 Diamonds and East will probably compete to an iffy 4 Clubs. After that, who knows.
Suppose that South passes, West passes and North opens 1 Diamond. North can't bid 1 No Trump with two doubletons, but may use the same logic as before and double. South knows that partner may have only three worthless Diamonds, so will probably bid a cautious 2 Diamonds. West must advance with his 6 points and two doubletons, but has the same problem as to what to advance. At least this time he'll have more information from North's opening and South's raise to perhaps avoid the pitfalls.
A really tough hand to get right! 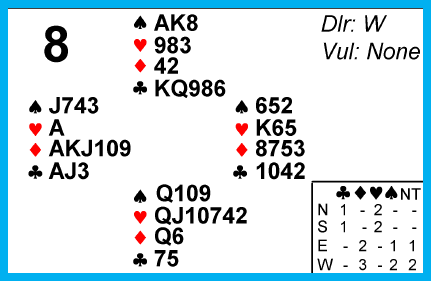 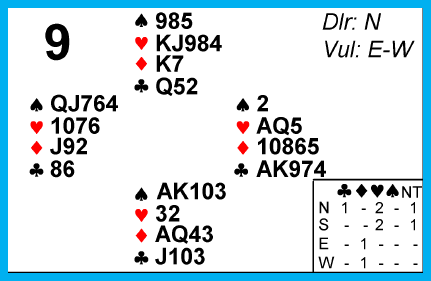 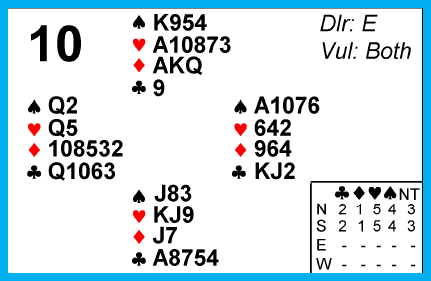 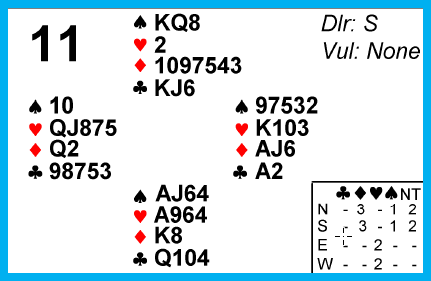 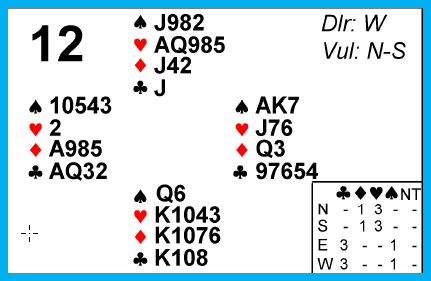 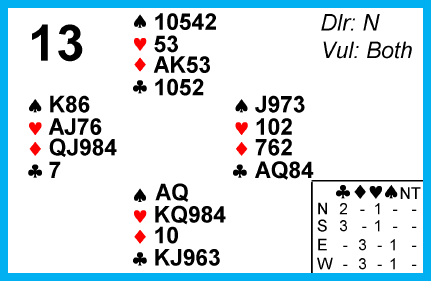 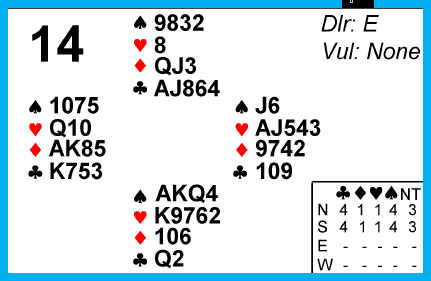 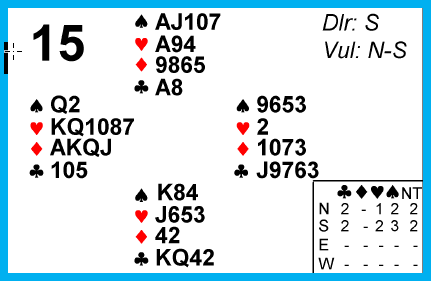 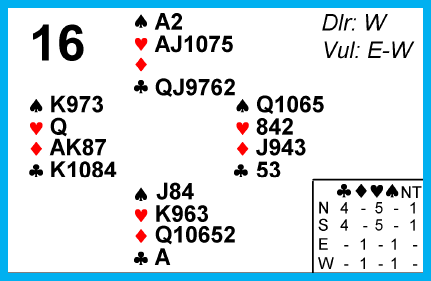 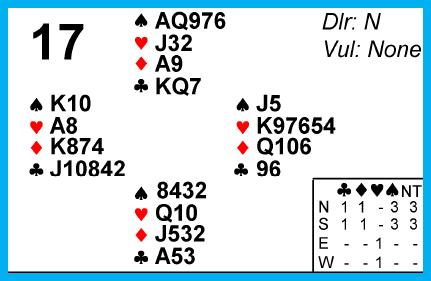 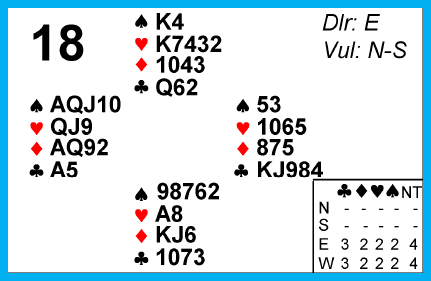