Congratulations to Bill and John, Sue and Walter and Emily and Christine for an unusual 3-way tie for the top at 57.65%. You've all done very well.

Next week we'll cover the Wonderful World of Reverses. Be sure to read the lesson and be prepared for discussion and any questions. Don't miss it.

Check back here tomorrow to see if I've made any useful comments on today's boards. 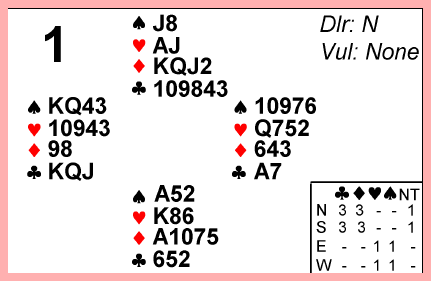 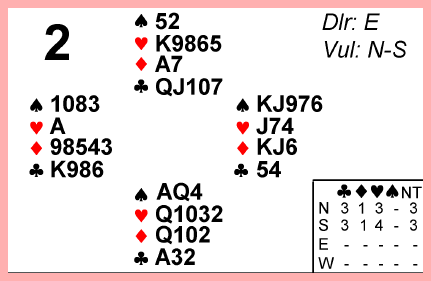 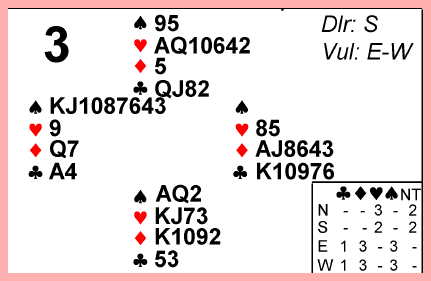 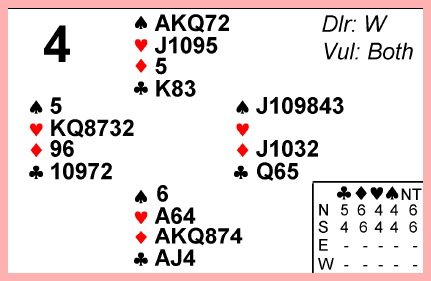 West may or may not open a vulnerable 2 Hearts, a weak-two bid, promising 6 Hearts with 2 of the top honors, 6-12 points and no void or 4-card major. Let's suppose he passes. North will open 1 Spade and South will respond 2 Diamonds to force partner to describe his hand. West passes again and North rebids 2 Hearts to promise 13-18 points and two major suits.
South stops to reevaluate and think. North could have a 5-card Heart suit, but South can't be sure. He now sees 18 points and is sure there's a game. He isn't sure where and there might be a slam. He would like more information before he settles for game or probes for slam, but he has no forcing bid other than 4 No Trump, Blackwood. He knows that partner has at least 9 cards in the majors and that doesn't leave much support for the minors. He decides that No Trump is his best contract and Blackwood is awkward in that case, so he's got to guess 3 No Trump or 6 No Trump. He decides to go with the sure game and rebids 3 No Trump. He may make plus 3 for the top, but it should be a decent score in any case.
Needless to say, it's more difficult if West opens the weak-two. 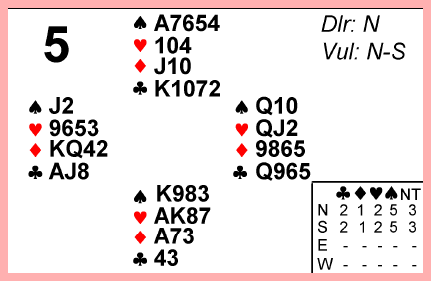 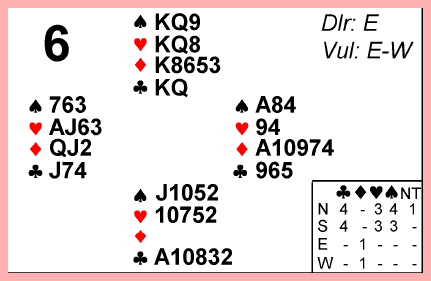 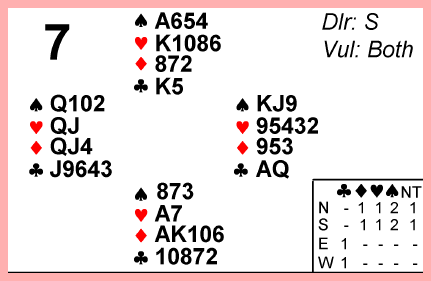 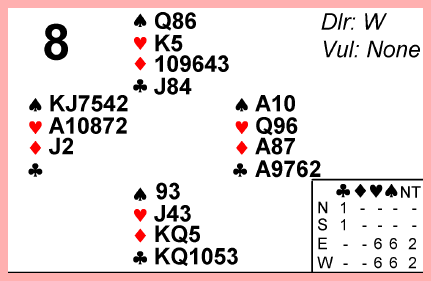 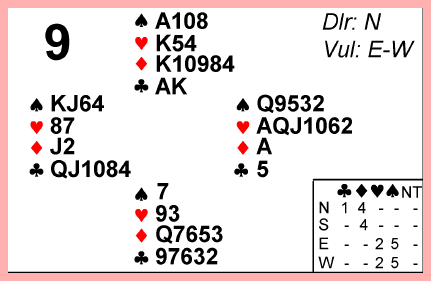 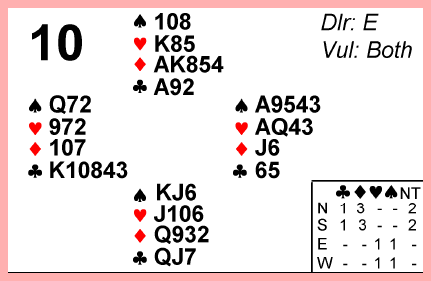 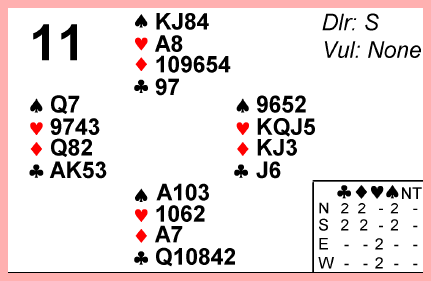 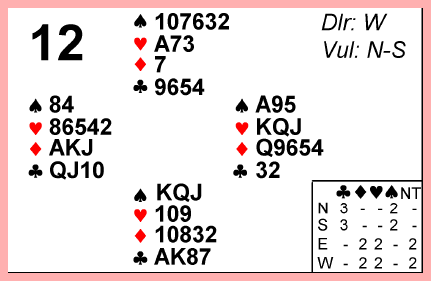 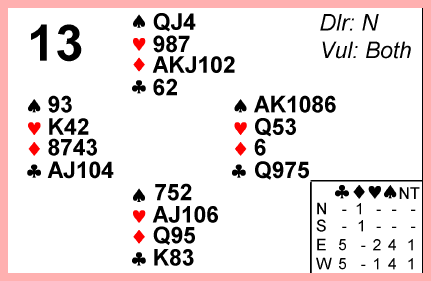 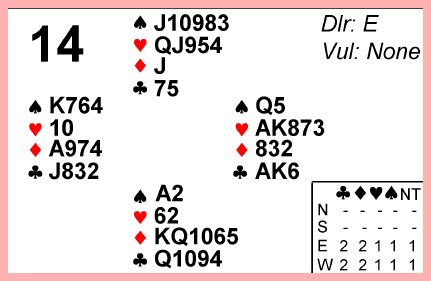 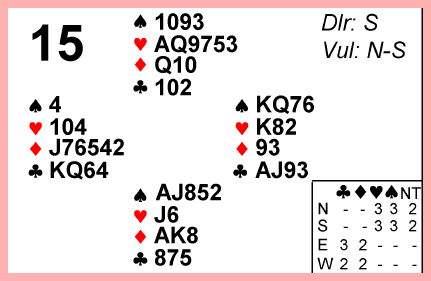 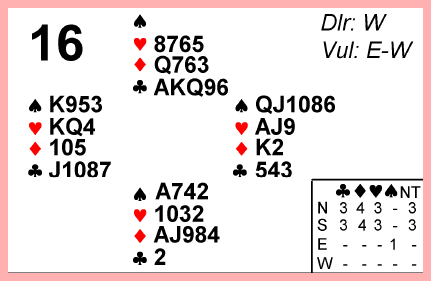 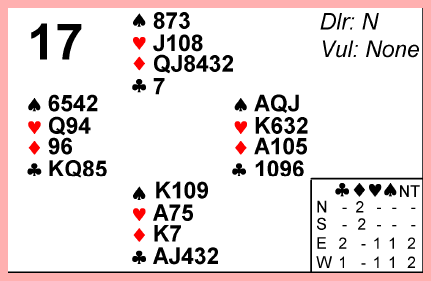 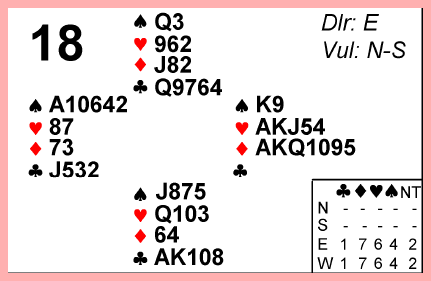 This is a big board, but the only pair to get close to slam were Sue and Walter. Can we bid the slam?
East counts 20 HCPs and adds 4 distribution points since he expects to find a suit fit. Let's suppose East has had lesson 5 and opens the Forcing Two-Club bid. West responds a waiting 2 Diamonds and East rebids 3 Diamonds. West rebids 3 Spades to show that he has enough for game, but is unsure about Diamonds. East rebids 4 Diamonds (No need to hurry since they are forced to game) and West raises to 5 Diamonds to show his support. East reevaluates to 27 points and ponders slam. Partner could have as little as 2 Diamonds and 3 points for his bids and East will probably settle for the sure game.
Let's suppose instead that they aren't sure about the Forcing 2 Club bid. East opens 1 Diamond and hopes that partner can respond. Fortunately, West has 5 HCPs plus 1 for the Heart doubleton and responds 1 Spade. He is reasonably sure of game and can't bid anything that West can pass. He can go straight to Blackwood, but he isn't sure he's ready to go to slam if partner shows 1 Ace. He can reverse to 2 Hearts to force partner to bid, but they haven't had the lesson and partner might not understand.
East decides to jump-shift to 3 Hearts to force to game and let partner describe his hand. West has a minimum for his bid and would like to stop, but can't. He shows preference for partner's first suit with 4 diamonds and East reevaluates to 27 points. This the same as the situation shown above, but this time he knows that West has support for his suit and at least 6 points. He bids 6 Diamonds and makes it for the top.
It ends up that the 1 Diamond opening is better if West responds and worse if West passes. He's in the batting box and mustn't strike out.